St. Paul’s interest in hosting a Major League Soccer stadium came not after Minneapolis missed an alleged July 1 deadline for securing a deal — but at least two and a half months earlier.

In an April 15 email to Mayor Chris Coleman — three weeks after MLS had officially awarded an expansion team to Minnesota — city economic development director Jonathan Sage-Martinson wrote that he been approached by a council member and a developer about hosting the team. Since Coleman had met in early 2013 with then-prospective team owner Bill McGuire, Sage-Martinson wondered if Coleman was still interested?

“The message I have them [sic] was ‘hell yeah,’” Coleman responded. “They don’t seem interested in us— just not that into us. Thought we could integrate them into new Midway/bus barn site.”

That email, released as part of the city's response to a Data Practices Act request filed by MinnPost, set in motion an examination of the stadium issue by top St. Paul officials in preparation for a May 18 meeting between Coleman and McGuire.

The staff work included the arranging of a specific “offering package,” with the tax breaks McGuire had been requesting; a powerpoint presentation on the benefits of the bus barn site; and a review of legislation drafted by McGuire’s lobbyists to secure the state’s approval.

All this began less than a month after MLS officials came to the Twin Cities not only to announce that they were awarding a franchise to McGuire and his partners — but to endorse a plan to locate the stadium in Minneapolis, near the Farmers Market. And it came just a day after McGuire had unveiled his plans to seek sales and property tax exemptions as part of his proposal to build a privately-financed stadium in Minneapolis.

And it happened well before Coleman pronounced, through a spokeswoman, that he “is not interested in interfering with conversations currently underway in Minneapolis.” That statement came on May 27, a week and a half after he and his senior staffers met with McGuire. Coleman Communications Director Tonya Tennessen later confirmed that a meeting was held but that it was informal and “very broad ranging.”

Senior staff also diminished the significance of the meeting before it was held. Council Member Dave Thune wrote Sage-Martinson and Deputy Mayor Kristin Beckmann saying he’d been asked by Star-Tribune columnist Jon Tevlin about rumors that the team was talking to St. Paul. 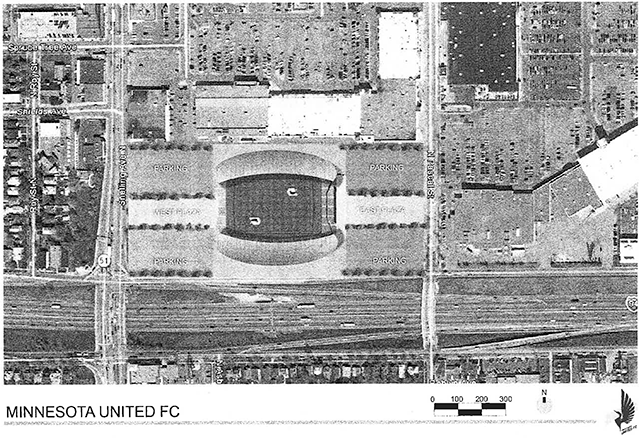 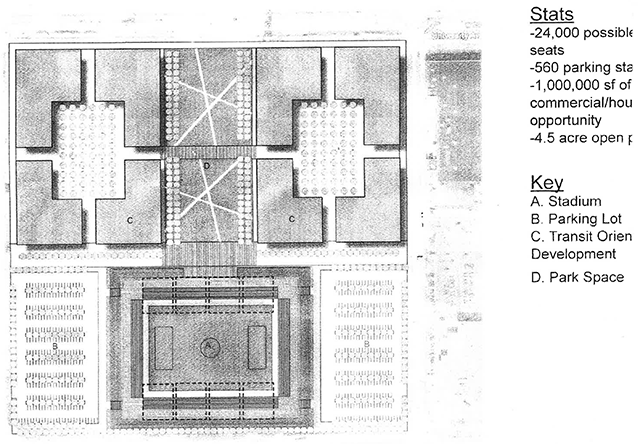 Courtesy of the City of St. Paul
Images of a stadium plan for a St. Paul site at Snelling Avenue prepared in 2013 by Bill McGuire and the Minnesota United group. They were sent to St. Paul officials June 5 of this year after a meeting between McGuire and St. Paul Mayor Chris Coleman to discuss shifting the stadium from Minneapolis.

“Councilmember,” replied Beckman on April 27, “you could tell John [sic] that the Mayor has not offered Bill McGuire anything other than a conversation.” Beckmann noted in another e-mail that she had given John Stiles, chief of staff to Minneapolis Mayor Betsy Hodges, a heads up about the meeting.

Three days before the Coleman-McGuire meeting, however, a staff memo laid out a “Possible assistance package for a new soccer stadium,” according to a memo from St. Paul business development and finance director Martin Schieckel to Sage-Martinson. The city could lead land assembly for the project since it had been working with public and private owners of land between I-94 and University Avenue at Snelling Avenue.

St. Paul could also provide tax increment financing for public infrastructure and parking, something that would require state legislation. It could lead efforts to rezone the site, support sales tax exemption for construction and property tax exemption, the memo stated. Those are the two requests McGuire made of the state and Minneapolis that have been rejected by Hodges, though she has since agreed to work with a task force of city staff and council members to consider the proposal.

Undated but released in sequence with the May 15 “draft offering package” was a 7-page powerpoint presentation on “University and Snelling” that contained details about the bus barn site and the adjacent RK Midway shopping center. It outlines the traffic on the Green Line and area roads and freeways as well as parking availability.

It also showed three schematics as to how a stadium could fit on the site, the Census demographics of the people within a 20-minute drive and those along the Green Line.

In an interview, Coleman’s communications director said the powerpoint was used in the meeting with McGuire but that the offer of help was not presented to him.

A thank-you e-mail from McGuire to Coleman sent shortly after the meeting contained plans McGuire’s group had produced in 2013 for how a 24,000-seat stadium would sit on the bus barn site.

A June 5 email to Beckmann from McGuire with the subject “Stadium discussion” included McGuire informing her of his request for information from the private owners of RK Midway. He also told her he had signed a nondisclosure agreement with them “but urgency seems to be lacking on their end.” He also congratulated Beckmann on the recent opening of the new CHS Field for the Saints.

Replied Beckmann: “That Thursday night was a great testament to the big things people can accomplish when there is a vision and determination to get it done!” She also warned McGuire that the city was hearing rumors of another private developer with interest in developing a project on the same site.

On July 9, when Coleman first went public with his aggressive attempt to win the stadium, he said he had waited until a July 1 deadline for action in Minneapolis — a deadline now insisted on by MLS, but one that wasn’t spelled out clearly when the announcement was made in March. Even McGuire said just weeks before that July 1 should not be considered a hard deadline.

“Given the passing of the deadline and the urgency of getting something done to get Major League Soccer in Minnesota really underscores the need to move forward quickly,” Coleman said during a press conference that day. He said his moving ahead was partly due to comments made earlier in the month by MLS Deputy Commissioner Mark Abbott that the league was interested in talking to St. Paul.

“This is really spurred specifically with the conversation I had with the deputy commissioner yesterday as well as the clear indication from him that the window of opportunity is closing pretty quickly.”

The documents also show how extensive discussions were between McGuire and the city in early 2013 — two years before the McGuire group was awarded the franchise. McGuire detailed a soccer stadium that would be oversized for the team he then owned, the lower-level Minnesota United. He also asked the city if it would be interested in leasing office space in related commercial development and whether it might complete the Ayd Mill road connection to and over I-94.

McGuire also asked then-economic development director Cecile Bedor about other sites, including one near Xcel Center that he considered too small and the Sears site closer to the Capitol.

McGuire met with Coleman and senior staff on March 13, 2013, to talk about a stadium for St. Paul.