Greece’s temporary bank closures — not to speak of its on-again, off-again negotiations over its debt and what to do about it — has been causing distress for the country’s people, who face limits on the amount of cash they can withdraw from their ATMs. The bank closures, ordered by Prime Minister Alexis Tsipras, came after efforts to renegotiate the massive Greek debt with European creditors reached a stalemate. On Sunday the Greeks will vote in a national referendum on whether to accept the creditors’ terms for a bailout deal.

Eighty-two years ago, Minnesotans faced similar distress when this state’s banks were closed in March 1933. Like today’s Greece, Minnesota was caught up in a nationwide financial crisis that was crippling the country’s economy.

In 1933, as the Great Depression deepened, financial pressures on U.S. banks intensified. Bank withdrawals mushroomed as depositors feared that their local financial institutions might fail. Faced with the prospect of a major run on their banks, states began ordering what were euphemistically known as bank “holidays.” Michigan, on Feb. 14, was the first to close its banks. In a ripple effect, the holidays quickly spread from one state to another.

The ripple reached Minnesota on March 4, the day Franklin Roosevelt was inaugurated as president in Washington.

In an effort to bolster local consumer confidence, the Minneapolis Journal maintained that the state-ordered bank holiday did not reflect on the solvency of Minnesota’s banks. Rather it was forced on Minnesota by the action of other states, according to the Journal. “With banks in New York and Chicago closed and Minnesota banks open, the outside world would have promptly withdrawn all its Minnesota deposits to meet its emergency needs, while Minnesota banks would have been powerless to protect their cash reserves.”

To lighten a somber mood, the Journal commented on the “laughter and myriad of jokes” that accompanied the bank closing. It also reported that “In downtown Minneapolis trade contracted immediately upon the closing of the banks but not nearly to the extent to which businessmen had feared,” the paper reported.

Extended nationwide the next day

On March 5, the day after Minnesota closed its bank, newly installed President Roosevelt extended the bank holiday to the entire country. Here, as elsewhere, the bank shutdowns had an uneven impact. Many lower-income and working-class people who relied on cash to meet their daily needs were in desperate straits. But Minnesotans with charge accounts at the local department stores could use their accounts to purchase what they needed. In St. Paul, an ad for Shunemann’s Department Store asked: “Caught Short of Cash in the Bank Holiday? Your Charge Account Will Tide You Over.” The ad went on to tell consumers they could even purchase streetcar tokens from Shunemanns and charge them to their store account. 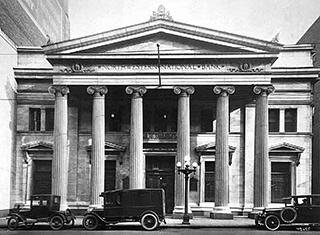 Courtesy of the Minnesota Historical Society
Northwestern National Bank, circa 1933

Even for the well off, the enforced holiday was a source of inconvenience. On the University of Minnesota campus, Walter Myers, an assistant professor of finance, had a run in with one of his colleagues over the bank holiday, according to the Minnesota Daily. On Saturday, March 4, the colleague burst into Myers’ office, waiving an accusing finger at him. “Friday night, you told me the banks were in no danger of closing,” the colleague told Myers angrily. “Now I am left with only 20 cents in my pocket. “Well,” replied Myers, “at least you can say I am consistent. I am in the same boat myself.”

During the first weekend in March, life in Minnesota went on more or less normally despite the national financial crisis. People who had a few dollars to spend could find some escape at the movies. At the State Theater in downtown Minneapolis, Buster Crabbe was starring in “King of the Jungle” with Frances Dee. The ad for the State showed a bare-chested Buster nuzzling Frances. At the Century, a very young Cary Grant was appearing in “Women Accused.” Soon he would be paired with Mae West in one of the big hits of 1933, “She Done Him Wrong.”

Less than a week after the bank holiday took effect, money began to circulate more freely as the Roosevelt administration started allowing banks to reopen on a limited basis. The immediate financial crisis may have eased in Minnesota in 1933, but this state and the rest of the country faced more serious economic problems as the Great Depression continued to worsen. That history has ominous implications for Greece in 2015.

An earlier version of this story appeared in the OLLI Scholar, published by Osher LifeLong Institute at the University of Minnesota, in 2010.