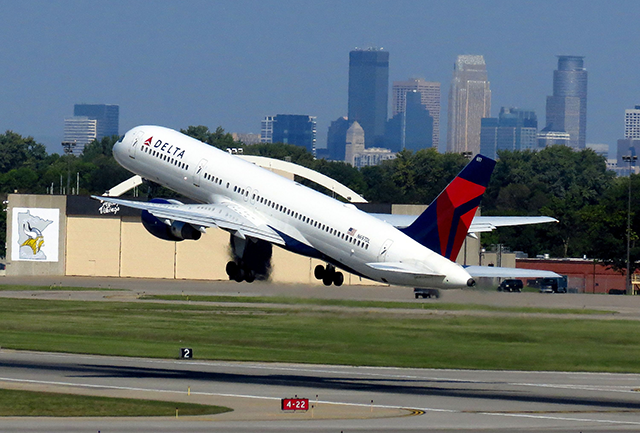 In a major decision aimed at reducing the risk of airline crashes, the Federal Aviation Administration has suspended arrivals on one runway at Minneapolis-St. Paul International Airport.

The order closes runway 35 — which runs roughly parallel to County Hwy. 77 —  to planes arriving from the south when flights are taking off from another runway, 30L, which approaches the northern end of runway 35 from the southeast. The reason: Arriving flights aborting a landing on runway 35 could fly north into the path of a plane departing from 30L.

“This ‘intersection’ in the sky poses potential risks if a landing aircraft must discontinue its approach and go around,” FAA spokeswoman Elizabeth Cory said in a statement. “This action could bring the airplane too close to an aircraft departing from the other runway, risking a mid-air collision.”

Runway 35 handles a minority of flights at Minneapolis-St. Paul, but the suspension could at times reduce the maximum number of planes that can land at the airport from 90 an hour to 60 or 64 an hour.

And though the suspension could provide some relief from airport noise for residents of southern suburbs of Bloomington, Burnsville, Apple Valley and Eagan, the move also means increased landings on runways that affect other communities around the airport. Cities southeast of the airport such as Mendota Heights could see an increase in flight traffic that otherwise would fly over more southern suburbs.

“The FAA and the National Air Traffic Controllers Association are evaluating options to increase arrival and departure rates while adhering to the new safety measures,” she added.

To speed up arrivals, the FAA may at times restrict departures to only 30R, and use 30L and 35 exclusively for arrivals.

In a statement made last week disclosing the July 24 FAA decision, MSP officials noted the likely reduction in flights over southern suburbs — but not the potential increase in arrivals on other runways.

“At this time we do not know how the FAA plans to operate the airspace, long term, with this requirement in place, so I cannot speculate to its impact on runway use,” said Melissa Scovronski, a spokeswoman for the Metropolitan Airports Commission.

But the FAA said it is looking into the possibility that the change will alter aircraft noise patterns around the airport.

The FAA also said the reduction in flight arrival rates could slow airport traffic between 5:45 p.m. and 6:45 p.m. on weekdays. “The arrival demand during this timeframe exceeds the arrival rate that can be safely handled with the [suspension] … so delays may occur. To maintain safety, the FAA moderates the number of arrivals entering the airspace, which results in delays.”

The FAA said no single incident prompted the suspension of arrivals on runway 35, but that the change was part of a nationwide effort to reduce the risk stemming from converging runways. The FAA said it hasn’t suspended a runway at any other airport for a similar reason.

MSP has had more air-traffic-control errors than other large U.S. airports in recent years, and some aviation experts have speculated that MSP’s runway layout may add a degree of complexity to controlling takeoffs and landings that contribute to air-traffic problems.

Minneapolis-St. Paul has at times ranked 13th in plane traffic but seen more problems than nine of the 12 busier U.S. airports. 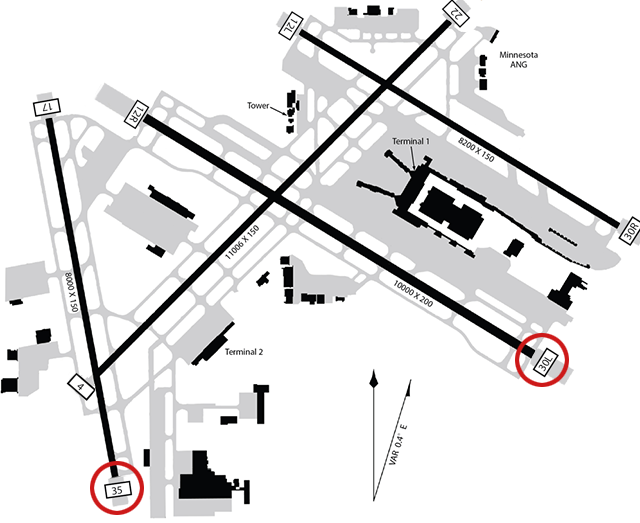 Federal Aviation Administration
Arriving flights aborting a landing on runway 35 could fly north into the path of a plane departing from 30L.

The airport tower recorded 34 episodes of planes flying too close together in 2012, according to FAA data. More than a third of them were considered significant enough to trigger a special risk analysis by the agency.

While the FAA hasn’t offered a specific reason for the higher numbers at the Minneapolis-St. Paul tower, agency spokeswoman Laura Brown has noted that each airport “has a unique set of operational procedures and runway configurations … .”