A Minneapolis-based company thinks its proposal for a new hydroelectric facility at St. Anthony Falls is exactly what the region is seeking: renewable and sustainable energy that could replace electricity now being generated by fossil fuels.

At the spot where the city’s industrial founders used water power to make Minneapolis the flour milling capital of the world, Crown Hydro has proposed “to provide clean energy for generations to come,” by redirecting Mississippi River flows to new turbines located near the now-mothballed navigation lock, the company states in promotional materials touting the project.

So what’s not to like? When an initial version of the plan was first introduced nearly 25 years ago, said Crown Hydro CEO William Hawks, “it was balloons and hot dogs.”

But that was two-plus decades and at least two iterations of the project ago. Now, at least according to some local governments and some residents, there’s quite a bit not to like.

The Minneapolis Park & Recreation Board and the Minneapolis City Council said last week that they have major concerns with the plan. For one, the project threatens the continued redevelopment of the area for parks and historic interpretation on the west bank of the river. Another concern: that construction of the underground water channels and installation of two 1.7 megawatt turbines could damage the sandstone and limestone foundations of the shoreline, including that under the Stone Arch Bridge.

A Minneapolis City Council member even raised the specter of the project causing “the total decimation of water flow over the falls. “It would make the falls dry for certain periods of the year,” said Council Member Jacob Frey at a meeting of the council’s Intergovernmental Relations Committee earlier this month.

The water-flow issue is in dispute. Crown Hydro proposes operating the turbines only during periods of average or above-average flows and shutting down during low-flow periods; it is a signatory to the Mississippi River System-Wide Low Flow Management Plan [PDF]. But raising the possibility of dry falls and a damaged Stone Arch Bridge is a fast way to counter Crown’s talking points, which include reducing carbon footprints and renewable energy.

The full City Council agreed with the Intergovernmental Affairs Committee recommendation to submit its concerns to the Federal Energy Regulatory Commission (FERC), which decides to approve or deny applications such as Crown’s.

“Generally speaking, there needs to be more clarity regarding the full range of impacts to this historic area including noise, vibration, visual, structural and accessibility, among others,” the resolution stated. “This is a vital natural and historic resource area and this project is potentially disruptive to it — both during construction and operation.”

The Minneapolis Park and Recreation board also voted Wednesday to submit its concerns to FERC — and to file a formal complaint over the way Crown Hydro’s application has been processed.

The proposal has taken a long and winding path to even get this far in the FERC process. Technically, Crown’s application is an amendment to a previous license application. In 1999, Crown was granted exclusive rights to develop a hydropower facility in the Mill Ruins area of the river. Initially the turbines and generators were to be installed in the basement of the historic Crown Roller Mill Building, adjacent to the upper falls.

Once considered one of Minneapolis’ finest mills, Crown Roller Mill stopped using water to power the mill in 1933 and stopped production in 1953. After a 1983 fire, the building was saved from demolition and renovated, complete with a reconstructed copper mansard roof. It’s now an office building.

When a deal couldn’t be reached with current owners of the building, though, Crown Hydro amended its plan — with Park Board encouragement — to locate the turbines on land owned by the Park Board near the former Fuji-Ya Restaurant. After FERC ruled that eminent domain powers that are sometimes available to help power projects could not be used against parkland (and after negotiations between Crown and the park board failed), that request was denied by FERC in 2005. 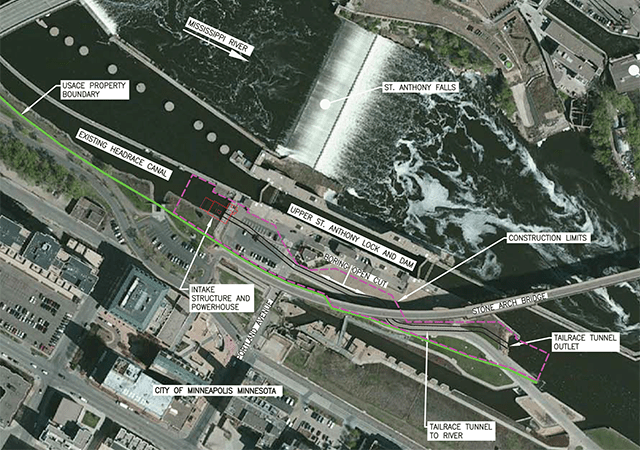 The current proposal would place the turbine and powerhouse underground on Army Corps of Engineers property adjacent to the lock control building. An intake structure would be located on the riverbank side of the guide wall at the lock facility. After passing through the turbines, 40 feet below ground, water would flow through a new 16-foot diameter conduit that would snake beneath the Corps property and the approaches to the Stone Arch Bridge before being discharged back into the river.

Hawks said he doesn’t fault the Park Board for not agreeing to the earlier plan, saying it lacks staff expertise that would have increased its comfort with overseeing a hydro project. “It’s the opposite with the Corps,” Hawks said. “They’ve done this all over the country. That’s why we feel good about it.”

Hawks said that once built, visitors to the area “won’t even notice” the facility. The turbines are vibration free and can’t be heard over the flow of the water. Crown has an agreement to sell the power generated — enough to power more than 2,000 homes — to Xcel Energy, which operates a generating facility on the east bank of the falls.

Hawks said he is prepared to answer the questions raised by commenters and FERC.

“That’s as it should be,” Hawks said. “But I can’t imagine there’s anything that would be a show-stopper.” If FERC gives approval, the $10 million project could be completed in six months. The turbine and generators have already been purchased, he said.

Another proposal to use water power for electricity is coming from the redeveloper of the Pillsbury A Mill, this one using the power generated to provide electricity to the new artists lofts being completed there. Another proposal to put turbines inside the lock, which closed to navigation in June, has been rejected by FERC but applicant Symphony Hydro is reapplying.

The Crown project has the support of the Minneapolis Regional Labor Federation, according to Crown’s website, and has attracted kind words from some environmentalists. Opponents, however, have both procedural and substantive objections.

Doug Verdier, of Minneapolis Park Watch, wrote that the project has changed so much since 1999 that Crown should be required to start with a new application and not be allowed to amend that earlier license. “It clearly is a new project and, as FERC has pointed out repeatedly, it should be submitted as a new project,” Verdier wrote on the Park Watch website. “An amendment of the existing license is not appropriate.”

The Downtown Minneapolis Neighborhood Association is also opposed the project, partly because Crown’s existing license allows much larger diversions of river water than the company is now proposing. In a letter to FERC, the group also expresses worries about damage to the Stone Arch Bridge from tunneling through the sandstone and limestone. Both a dry falls and a damaged bridge could threaten one of the city’s tourist attractions, which has undergone massive and expensive renovation and restoration since the original license was granted, the neighborhood group states.

Given that the group thinks there should be a new license application, plus its belief that Crown hasn’t been meeting FERC requirements and deadlines “and taking into account the actual and potential negative impact on the #1 tourist attraction in Minneapolis, the public good would be best served by terminating the existing Crown Hydro License,” wrote association board chair Chad DiDonato in November.