As Joe Atkins surveyed his beer options at the Minnesota State Fair, he was surprised to see not a single local offering on tap. When he chided the vendor about his selection, his server immediately launched into a tirade against the Legislature.

It was 2006, and at the time the fair was only licensed to serve 3.2-percent-alcohol beer. There were few breweries in Minnesota interested in making the low-alcohol beer, and the server was mad that lawmakers wouldn’t change state laws to open up the fair to better beer options.

“I think I know a guy,” said Atkins, before taking his beer and walking away.

That guy was, in fact, him. A Democratic state House representative from Inver Grove Heights, Atkins was regularly responsible for carrying the so-called “omnibus liquor bill,” which made changes to the state’s liquor laws, in the Legislature. The next year, he led an effort to pass a law allowing strong beer to be served at the fair. Then, in 2011, lawmakers passed the “Surly bill,” which allowed breweries to serve pints of their own beer in taprooms, a move that caused the nascent craft beer industry in Minnesota to boom. Nowhere have those changes been as noticeable than at the fair.

The most recent change to beer laws, made during the 2015 legislative session, allows brewpubs to serve their beers at the Minnesota State Fair. (Though brewpubs were around long before the Surly law passed, prior to this year they couldn’t serve their offerings anywhere outside of their own establishments.)

The change was a big deal for Dave and Mike Hoops, brothers who have been brewing beer in Minnesota for decades. Dave works for Fitger’s Brewhouse in Duluth, while Mike has been brewmaster at Town Hall Brewery in Minneapolis for the last 15 years — both establishments are brewpubs. But the brothers had never been able to serve their brews in the same location at the same time. Until now. This year, about 10 brewpubs will participate in the Minnesota State Fair.

“For us together, it’s a great thing,” said Dave. “For me personally, it’s huge because so many people have to drive so far to get our beer. No one can understand these beer laws and they can’t understand why they can’t buy our beers in the cities. Now, the fact that they can go to the fair and drink everybody’s beer, it’s just a nice culmination of many, many years of work to have our beer on the open market a bit.”

“It sounds like little change, but now that we can sell at one booth at the fair we are seeing really positive feedback from potential consumers who have never had our products before,” Mike said. “It’s been awesome to see the feedback and get our product out there more.” 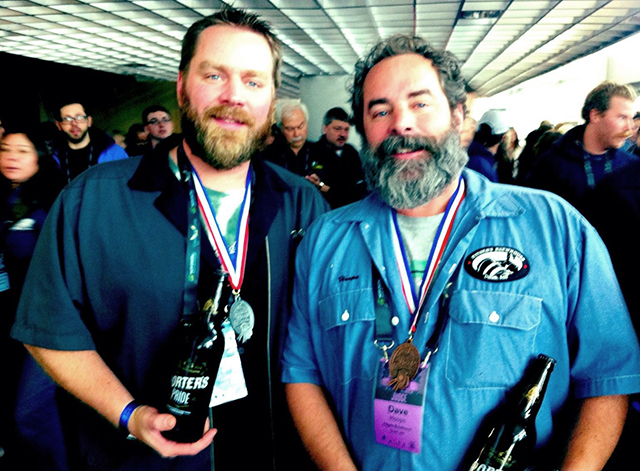 Courtesy of Nathan Bowie
Mike and Dave Hoops, are serving their respective employers’ beer at the Minnesota State Fair.

The Minnesota State Fair has come a long ways since its earliest days. For most of the state’s history, in fact, no alcohol was allowed at all at the fair. But much has changed, especially since the turn of the century. A timeline:

Initially slow to catch up, the Minnesota State Fair is now, in some ways, ahead of the rest of the state when it comes to liquor laws.

To get a sense of that, one need look no further than the Agriculture/Horticulture building, where, on recent day, fair-goers packed in for the “Land of  10,000 Beers” exhibit, presented by the Minnesota Craft Brewers Guild. Nearly 200 beers from about 60 establishments were up offered up. And through Labor Day, more than 100,000 fairgoers  a day will — if they so chose — be able to buy a craft beer and wander around on the 360-acre fairgrounds.

“We went from being 50 or 60 or 70 years behind the times and now they are a vanguard for beer at the state fair,” Atkins said. “We keep reaching further a little each year. There’s a lot of kids at the fair. It’s supposed to be a Garrison Keillor-esque, Lake Wobegon-ish place where everybody has a good time and nobody gets carried away. What you can do now is you can get a beer and you can get a Minnesota-made beer and you can support the economy.”

Outside the 12-day state fair, brewpubs still can’t distribute their product widely across Minnesota. They can’t even have so-called “guest taps” at other breweries. The Hoops brothers aren’t pushing hard for that change now. Neither has the capacity or equipment at their current facilities to start selling their product around the state, but they imagine, as trends continue, lawmakers will simply make the change on their own.

“I think it’s going to organically happen. My opinion is they are going to start issuing one brewery licence that isn’t separated by class,” Dave, of Fitger’s Brewhouse, said. “But being left out of the state fair sucked. For now, this is nice.”