The chairman of the Metropolitan Council is trying to head off a political conflict with Republicans in the Legislature over the final piece of funding for the Southwest Light Rail Transit project.

In comments made after a meeting of the project’s corridor management committee this week and in a letter to a GOP state legislator, Chairman Adam Duininck pledged not to go forward with the $1.74 billion rail extension without legislative approval.

Specifically, Duininck has now backed the council away from using a funding mechanism known as certificates of participation, or COPs, to come up with the state’s 10 percent share of the project. The certificates are a form of borrowing in which investors purchase them under the promise that they will be repaid with interest out of future government revenue. Unlike bonds, however, the Legislature would not have to specifically authorize their sale, and the Met Council is claiming that it already has the legal authority to use them.

The possibility of using COPs to replace more-direct funding from the state was raised during Met Council meetings earlier in the summer. Budget staff said they could be used if the Legislature, particularly Republicans who control the House, continue to block the final state contribution of around $138 million. The Met Council was not asked to approve the use of COPs to fill-in for the state share, but senior staff members said they could be back next year if the Legislature doesn’t act on permanent funding.

Those moves triggered a letter in June from state Rep. Tim Kelly, a Red Wing Republican, who is chairman of the House Transportation Committee. “The implications of the council’s proposed alternative funding scheme are staggering for taxpayers and state and local policymakers,” Kelly wrote. He expressed concerns over the legality of the mechanism, the wisdom of using it to keep  SWLRT moving forward in the face of the rising costs and the impact of the certificates on other public borrowing.

Since the COPs would have to be repaid with existing Met County transit funds, Kelly asked what other projects will not be built because funds targeted for those projects will be shifted to SWLRT.

While maintaining that the Met Council has the legal authority to use the certificates, Duininck said that he has pledged not to use COPs to replace the state’s share. He did, however, say they might be used to fill temporary funding gaps in order to keep the project moving ahead and to remain eligible for the federal matching money.

That is a different stance than he took in early July after the corridor management committee approved the lower budget and revised scope of the project. Duininck said July 1 that he and top staff would be presenting the new funding plan to federal officials and he would show how COPs could be used if the state continues to balk.

“The plan is to not use them until next year and we hope to not use them ever at all,” Duininck said then. “But it is an important mechanism to show that we can, if need be, provide a state share.” 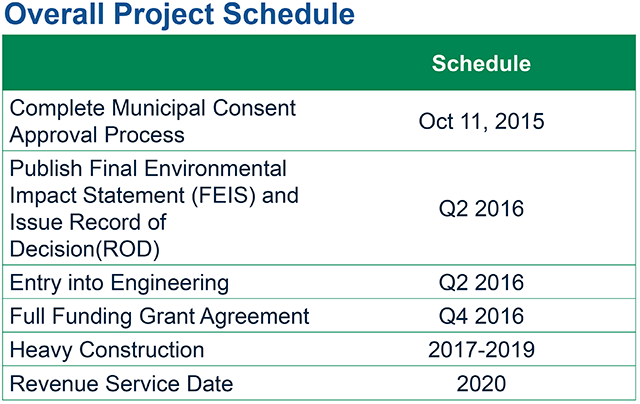 But when asked at Tuesday’s meeting by St. Louis Park Council Member Jake Spano what the council’s contingency plan is should the 2016 Legislatue fail to provide money or taxing authority for SWLRT, Duininck did not mention COPs. “In terms of having a contingency plan, there really isn’t one,” Duininck said.

The project has between $730 million and $750 million in local matching money secured and is in good position to qualify for $887 million in federal dollars. The state’s share would be the last funds contributed — but are crucial to capturing money already set aside for the project.

“My hope is that nobody’s going to stop those being the last dollars in to secure this project going forward,” Duininck said. “If it happens, then that’s when we’ll have to decide what we’re going to do.”

Waiting until 2017 to get funding from the Legislature would end up adding about $50 million to the cost of the project due to inflation, Duininck said. And giving up the project’s place in line with the feds could cost much more than that.

The federal government will be asked to pay 50 percent of the project costs. The remaining shares are already approved: 30 percent by the Counties Transportation Improvement Board (CTIB), and 10 percent by the Hennepin County Regional Rail Authority.

Avoiding a fight with Republicans

Duininck said he sent a letter to Kelly on July 22 that promised the Met Council wouldn’t act without legislative approval. “Should the Legislature ultimately choose not to fund the Southwest LRT project in a future legislative session, the project will not go forward,” Duininck wrote.

Tuesday he said he sent the letter to “avoid the fight” with legislative Republicans, something that he feared “could raise governance issues with the council and it jeopardizes us in the long run.” He said he was relatively optimistic about chances for light rail funding in 2016 either through a higher regional sales tax, direct appropriations or bonding. “It seems to me that both the House and Senate are really determined to get a (transportation) bill done.”

Perhaps it was with the legislative session in mind that project staff presented a map showing where workers on the Central Corridor project came from: 61 of the state’s 87 counties. Contractors and suppliers gave home office addresses in 40 different counties.

House Republicans have expressed opposition to further construction of light rail in the Twin Cities region. They did not go along with a plan by Gov. Mark Dayton that was approved by the Democratic-controlled Senate to increase the transportation sales tax authority in the five Metro counties that make up the CTIB and that would fund the state share of SWLRT among other projects.

In addition to the gap of $138 million in state funding, an effort to pass the hat among Hennepin County and the cities along the 14.5 mile line has so-far fallen short. Of the $30 million needed to close the final funding gap after $250 million in project cuts were identified, only $12.5 million has been raised — $8 million from Hennepin County, $2 million each from Minnetonka and Eden Prairie and $500,000 from Hopkins.

Lamothe said the staff would continue to seek help from the cities but would also continue making design refinements with an eye toward more budget savings.

The discussions about prospects for state and local funding were the two discouraging notes in an otherwise upbeat hour-long meeting of the committee of state and local officials, who advise the Met Council on the project. Staff briefings reported that the project is moving ahead with environmental review, legal challenges and federal approval.

Met Council staff submitted the revised scope of the now $1.774 billion project to the Federal Transit Administration in early August, and Project Director Craig Lamothe said FTA staff began “active review” of the revised paperwork. Hennepin County Commissioner Peter McLaughlin said the fact that federal staff acted immediately should be interpreted as a good sign. “When they get on it, the thing moves,” he said. 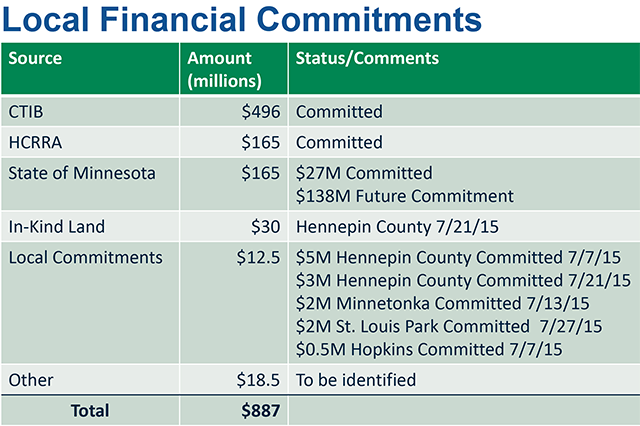 And the management committee passed an important informal milestone with its first briefing on the actual construction of the line. Project Manager Mark Fuhrmann told committee members there would be an open house for potential contractors in October and said the timing of construction — set to begin in 2017 — is fortuitous because it comes just after two other massive construction projects in the Twin Cities will be completed: the Vikings Stadium and the St. Croix River Crossing.

“They will be hungry for work,” Fuhrmann said of the state’s construction businesses.

After the meeting, Duininck said talking about construction was welcome after the recent months of crisis management and cost cutting triggered by a springtime announcement of a ballooning budget.

“Once we start talking about construction and hiring firms and talking about the workforce it begins to get really real to me,” he said.