Since it was closed to navigation June 10, the upper lock at St. Anthony Falls has just kinda been sitting there.

The U.S. Army Corps of Engineers closed the upper gates to hold back the Mississippi River, locking the lower gates in the open position. The now-drained lock is an empty box: 56 feet by 400 feet by 50 feet worth of air that bars upriver migration of invasive carp.

The water that once filled the lock to float traffic up and down the river now joins the flow either over the spillway or through an Xcel Energy hydropower facility on the east bank.

But a North Carolina engineer with Minnesota roots is hoping to reinvigorate a proposal to use the lock to generate electricity. Robert Schulte wants to mount two submersible turbine generators on panels inside the lock. Water passing through the turbines would generate 3.4 megawatts of power, or about 1,600 homes worth.

The plan, known as Symphony Hydro, was considered dead — or at least badly damaged — when federal officials rejected it earlier this year. The Corps objected because it still had the responsibility to use the lock for flood control, even though it had closed it for navigation. Since turbines in the lock would make it difficult to run ice-and-debris-laden stormwater through, the plan wasn’t workable, the Federal Energy Regulatory Commission (FERC) ruled in February.

But Schulte amended his plan in response to the Corps’ concerns. The turbines would be mounted on panels that could be lifted up and out of the way should high water levels occur. Schulte describes the mechanics as being like industrial-sized garage doors. The Corps no longer objects to the project, but told FERC that the existing lock gates might have to be replaced, and that Symphony should keep that in mind if its plan makes use of that equipment.

With the Corps no longer opposed, FERC granted Symphony a permit on Aug. 13 that gives the company first use of the lock for a hydro facility, pending completion of the studies required of any such project and final FERC approval. If all goes his way, Schulte estimated an in-lock facility could be producing power in four years.

Second in line for water

While it has a permit, Symphony doesn’t have something more valuable — the right to use Mississippi River flows to spin the turbines. That belongs to another power plant developer, Crown Hydro, which proposed building an electrical generating facility on the west bank of the river nearly 25 years ago. The project’s plans have changed at least twice — first by moving the proposed turbines from the basement of the Crown Roller Mill building to Minneapolis Park & Recreation Board land near the former Fuji-Ya Restaurant, and more recently to land owned by the Corps.

Crown officials want to place the generating equipment 40 feet below ground. Water would flow from intakes on the riverbank side of the guidewall at the lock, through the turbines and back to the river via a new 16-foot-diameter tailrace near the Stone Arch Bridge.

Opponents, of which there are many, are concerned about vibration from the turbines, damage to the foundations of the bridge from the tunnel, and disruptions to an area envisioned to be an expanded park in the Mill Ruins area called Water Works.

And there are also worries that Crown would draw so much water from the river that it could endanger one of the region’s top tourist attractions: the spillway at St. Anthony Falls. Both the city of Minneapolis and the park board have raised major concerns in comments to FERC. Both have cited FERC’s own staff conclusions that the project is so different from what was permitted in 1999 that Crown should be made to start over. If that is what FERC decides, Symphony would leap past Crown for first dibs on river flows. 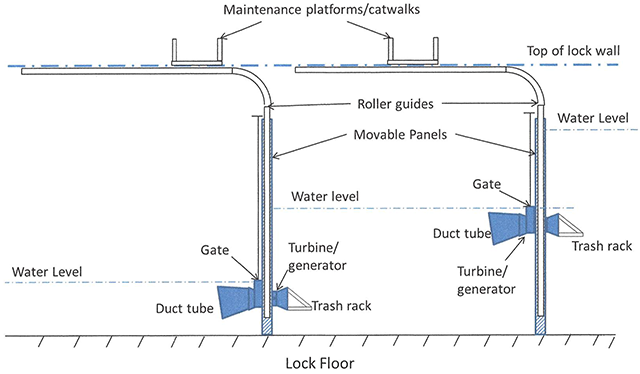 Schulte Associates, LLC
Conceptual illustration of new turbine/generators to be installed within the existing lock, shown in their lowered (operating) position. 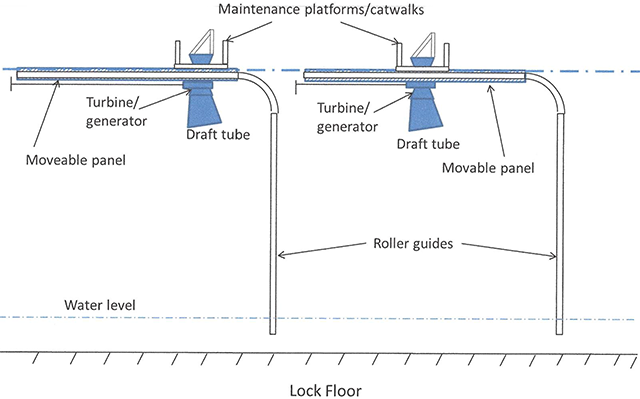 Schulte Associates, LLC
Conceptual illustration of new turbine/generators to be installed within the existing lock, shown in their raised (maintenance) position.

Schulte said he thinks his plan is superior to Crown Hydro’s: less visible, less disruptive but with the same power-generating capacity. “We feel putting it in the lock is the place it ought to be,” he said. But if Crown is allowed to move ahead, the Symphony project would go away.

“If Crown gets built, we don’t think there’s enough water to do ours too,” he said. “But it’s been 16 years and they haven’t built anything. That speaks for itself.” Yet the ongoing Crown process will delay some of the work Symphony must do make a full application. The Corps does not want to devote staff work to Symphony until Crown gets a decision from FERC.

“We request that the Federal Energy Regulatory Commission issue a decision on that action as soon as possible so that we can direct our efforts to the appropriate application,” wrote Maj. Gen. Michael Wehr, the Corps’ Mississippi Valley Division commander.

Schulte spent 30 years in Minnesota serving in a series of senior positions with Northern States Power, a precursor to Xcel Energy. He formed Schulte Associates with his brother Richard 15 years ago. Richard lives in Northfield.

The proposal for St. Anthony Locks is unusual but is similar to a proposal made for a lock further down the Mississippi at Quad Cities, Iowa. Schulte was a consultant to that plan but not the developer. Should Crown lose its first-in-line position, Schulte would move ahead with studies, tests, surveys and mapping — work he estimates would cost between $500,000 and $750,000. He estimates that if he gets the go-ahead, he could have the project generating power within four years at a construction cost of around $9 million.

Opposition to Symphony is not as vocal or passionate as it is to Crown Hydro, at least not yet. Friends of the Riverfront has asked to be an official intervener in the permit process. The group has been involved in commenting on various hydro proposals on the river and told FERC in its motion that it supports alternative energy in general and supported a proposal by Xcel to increase production at its St. Anthony Falls plant.

But in a July 31 motion to intervene, Edna Brazaitis, president of the organization, stated that the Symphony application is premature and should not be processed until Crown has received a ruling.

“FERC has well established rules governing the timing and procedure for evaluating competing applications,” she wrote. “It appears that Symphony is attempting to circumvent these rules with a very speculative project.”

Of the amended application, Brazaitis wrote: “While moveable turbines may not pose the same problems a fixed turbine would have, as the Corp(s) states in their response to this application, it would pose complications some of which may not be known at this time and which may render Symphony’s plan impossible.”

Doug Verdier is a Mill District resident who has been monitoring hydro development on the river for parks and river groups including Minneapolis Park Watch. In an October letter to FERC, written before the first plan was rejected, Verdier said the lock should remain available for navigation even if the current policy is to use it only for flood control.

“It is inconceivable that the lock would never again be needed for navigation,” Verdier wrote. “It is critical that the lock remain functional, controlled by the Corps of Engineers, and unencumbered by any sort of construction so that it is available immediately when needed in the future.”

The Park Board also raised concerns about the turbines interfering with future navigational use of the lock and said construction and maintenance vehicles would need to cross Park Board land, something that “would cause hazards to park users and undue wear and tear on MPPB land.”

Schulte said the Corps did not raise navigation issues in its comments. Still, he thinks the turbines could be raised high enough from the lock to allow barges and other traffic to pass beneath if needed. If the generators were installed toward the middle of the 400-foot lock, there would be enough room for a shorter vessel — 150 feet or less —  to pass beneath the generators and be well clear by the time the lock was filled and the vessel raised to the upstream level.

But even that would be difficult under the current state of the lock because the Corps tied back the lower gates when it mothballed the lock and removed the hydraulic cylinders needed to open and close them. In his comment letter to FERC, Wehr said it has “concerns about the reliability” of the upper gates that are needed for flood control. It is looking at replacing upper gate equipment — something it thinks will cost $3.5 million.

Wehr also noted in his letter that the Corps is investigating the impacts of not having flood control capabilities at the lock “and, if the induced flooding effects are acceptable, revising the current water control manual not to operate for flood control, and placing a permanent closure across the lock chamber.”

What about the carp?

Schulte said he doesn’t think the design of his proposal would provide an opening for the carp to migrate upriver, but he is sensitive to the question because that was the reason for the closure of the lock in the first place. Congress voted in 2010 to close the lock to keep the carp downstream from the falls.

“We feel confident but we’d need to demonstrate it so as not to defeat the purpose of closing the lock to navigation,” Schulte said of ways to keep carp downstream.

Finally, Schulte is well aware of the primary issue that will be raised about the project — its effect on the scenic spillway. In the application to FERC, Symphony promised that it “would use only that amount of water available in a manner compatible with existing navigational and operating conditions of the Corps and other pre-existing uses on the river.”

That is, if flows are too low, the lock gates can be closed and the turbines shut down.