Minneapolis Mayor Betsy Hodges unveiled her Working Families Agenda in April 2015, during her State of the City Address. The ambitious proposal called on Minneapolis businesses to provide more predictable work schedules and paid sick leave for their employees.

In justifying her new initiative, the mayor declared that “wages in the American economy for low-income and middle-class workers and families have stagnated in the last 40 years. As a result, the gap between low- and middle-income workers on the one hand, and the highest-paid people on the other, is the widest it’s been in nearly a century.”

“The expectation that if you worked hard you could get ahead is now more myth than reality for low-income people and many people of color,” Hodges noted in her April address.

But over the next few months, the mayor watched opposition to the Working Families Agenda build as local business owners began to assess the impact of the plan on their bottom lines. With irate calls and emails pouring into City Hall, Hodges said in mid-October that the plan’s work scheduling provisions would be shelved, at least temporarily, while policymakers took a fresh look at that issue. Then, a week later she announced that action on the sick leave requirements would also be delayed, pending a review of those requirements by a locally appointed task force.

Hodges is not the first Minneapolis mayor to face a political pushback for making worker rights the centerpiece of a municipal agenda. Nearly 100 years ago, another civic activist was elected to the top post in City Hall after drawing attention to the large gap between the “haves” and the “have nots” in Minneapolis.

When he was elected mayor in 1916, Thomas Van Lear represented a sharp break in the string of mainly wealthy businessmen who preceded him in office.

Neither wealthy nor a businessman 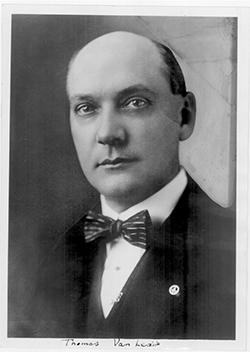 Van Lear was not wealthy and he was not a businessman. He had been a skilled factory worker and union organizer before his election in 1916. But it was his political affiliation that set him apart from his mainly Republican predecessors. Minneapolis’ newly elected mayor was an avowed socialist, a label that greatly disturbed the city’s conservative business leaders.

Van Lear had run for the city’s highest office twice before. Both times, he had come close to toppling establishment candidates. During those earlier campaigns, the labor activist had used his powerful oratory to build a loyal following in Minneapolis’ working-class neighborhoods.

In 1914, he told a group of enthusiastic supporters “when fat, slick, well-dressed men, who never missed a meal in their lives, come down here and tell you workingmen that you should be patient and satisfied with things as they are, I think you ought to tell them to go to hell!”

A focus on fares

As mayor, Van Lear had few policy levers he could pull in an effort to promote workers’ rights. But he and the members of the Minneapolis City Council were able to weigh in on one issue that greatly affected the pocket books of Minneapolis residents: the fare they paid each day to ride the street car to and from work.

In the early years of the 20th century, the privately owned Twin City Rapid Transit Company (TCRT) operated the streetcar system in Minneapolis and St. Paul under franchises granted by both cities.

In 1916, TCRT and its franchise had emerged as a major issue in Van Lear’s mayoral campaign. That year, Minneapolis officials were preparing to renegotiate the city’s agreement, which had been scheduled to expire in 1923. Under the terms of a new state law, the city and the company were able to negotiate a new agreement prior to 1923 if both parties chose to do so.

The election-year controversy revolved around the value of the TCRT’s assets, which determined the rate of return the company was entitled to receive under any new franchise agreement. The company’s prescribed profit, in turn, helped determine the streetcar fare paid by TCRT’s riders. During the campaign, Van Lear maintained that the company had artificially inflated the value of its property by more than $20 million in order to maximize its profits.

In his inaugural address on Jan. 2, 1917, the newly installed mayor called for an outside valuation of TCRT’s property and an option to convert the streetcar system to public ownership. Van Lear’s address also dealt with the need for publicly managed employment bureaus that could provide free job referral services for the unemployed.

Van Lear had hoped to focus on the workers agenda outlined in his inaugural address, but only months after taking office, he was faced with a major new issue that cast a shadow over his administration when the U.S. declared war on Germany. 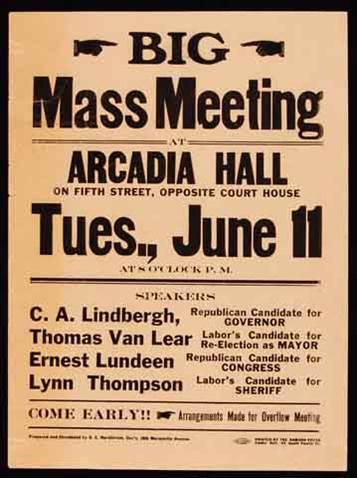 As war fever swept through the country, Van Lear found himself under attack from his political opponents, who equated his ties to the anti-war socialists with disloyalty that bordered on treason.

Van Lear was careful to voice support for the war effort even while criticizing those big-business interests that sought to benefit from it, but he was not willing to disavow the Socialist Party platform that called the war “a crime against the people of the United States.”

In 1918, as he sought a second mayoral term, Van Lear campaigned with former Rep. Charles Lindbergh, the father of the famous aviator. That year, the elder Lindbergh was running to unseat Minnesota’s incumbent governor in the Republican primary, with backing from the agrarian-based Nonpartisan League.

During an increasingly bitter city election campaign, Van Lear tried to deflect the loyalty issue by charging that his opponents were using the issue as a cover to defeat him because of his views on economic issues. “They had to have some excuse to defeat the working-class candidate so they say this fellow Van Lear is not quite loyal,” he told his supporters at a campaign rally at the Minneapolis Auditorium.

In the end, Van Lear’s socialist ties proved to be his political millstone, and he was narrowly defeated for re-election in November, only a week before the armistice brought an end to World War I.

Thomas Van Lear may have served only one term as mayor but he helped lay the foundation for a progressive urban rural alliance that would evolve into Minnesota’s Farmer Labor movement. Today, his legacy is reflected in the name of Minneapolis’ dominant political organization, the Democratic Farmer Labor Party, which claims Minneapolis’ current mayor and 12 of her 13 City Council colleagues as its members.

An earlier version of this article appeared in the summer 2015  issue of Minnesota History.