It was probably for the best that David Sullivan-Nightengale was sitting in the middle during the campaign season’s only forum for those running for St. Paul City Council Ward 5.

The likable independent candidate created space — physically and politically — between the other two candidates, first-term incumbent Amy Brendmoen and challenger David Glass, in a campaign that started personal and is getting more so.

There are smaller issues, of course, ward concerns like crosswalks and boarded-up houses. And citywide topics like soccer stadiums and parking meters. But what is never far below the surface is the soap-opera-like story of how the city pushed Glass’ business out of a public space at Como Lake Pavilion, replaced his Black Bear Crossings cafe with the more-popular — and for the city, more lucrative — Como Dockside Restaurant; about how the city will pay much of the extra revenue back to Glass and his wife as part of an $800,000 settlement of litigation over the closure; about how the decision was made by Mayor Chris Coleman with Brendmoen’s support and worked on by Parks director Mike Hahm, with whom Brendmoen is in a romantic relationship that raised possible conflict-of-interest issues.

“I think his motivation for running is revenge,” Brendmoen said this week of Glass’ challenge, which was announced the month after the settlement was reached. “The rest is just infill.”

Counters Glass: “I’m not gonna say it didn’t make [me] angry that [we] had a contract and you expected the city to honor it. You’d have been mad too. But I would have run either way.”

And yet, somewhere along the way the Ward 5 race become a proxy war for broader political themes in the capital city and nationally. Brendmoen, just three-and-a-half years in office, is being made a stand-in for the political establishment in an insider-vs-outsider campaign.

That theme is present in other ward races, as well, including Tom Goldstein’s challenge of council president Russ Stark in Ward 4. But it dominates in Ward 5. 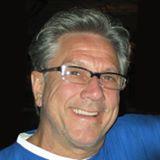 Glass — and to a lesser degree Sullivan-Nightengale — accuses the city council and Mayor Coleman of being insular and opaque, of making decisions privately, of catering to big business and emerging millennials who think St. Paul should make a faster foray into the 21st Century.

More bike lanes? A more-vibrant restaurant and entertainment scene? More options for downtown living? While some voters see those as exciting changes that will make the city more attractive to more people, others see them as threats to the St. Paul they know and love.

Brendmoen, who took office after defeating incumbent Lee Helgen in 2011, considers herself among the former, saying she is excited about the growth in the city including the vitality of neighborhoods like Lowertown. The fact that St. Paul is becoming more attractive to young adults is a good thing, she says. And she often turns accusations about her role in the demise of Black Bear Crossings into opportunities to explain her excitement about the popularity of Como Dockside.

“I’m for moving forward with a city that’s for everybody — for young people and for old people — and we’re fortunate that those things turn out to be pretty much the same,” Brendmoen said. To her, that means, “walking friendly, grocery friendly, local. Planning around people instead of planning around cars.”

Said Glass: “I’ve watched politicians look outside the city and say, ‘I wish we could be like Minneapolis,’ This mayor and this city council have taken it a step further. They say, ‘We need to be like Copenhagen or Portland or Seattle.’ But St. Paul likes being St. Paul.” 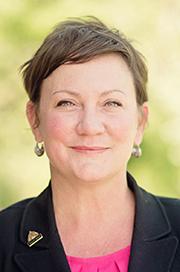 Brendmoen, currently the only woman on the council, defends the city’s public processes, saying issues are taken to district councils and other groups when still in the formative stages. Full public hearings are held before votes are taken and are not-infrequently sent back to staff or city boards for more work.

Of her role as the incumbent, Brendmoen says: “I have a record, not a magic wand.”

Glass, in a viewpoint echoed by a newly formed group called Saint Paul Strong, thinks the council needs to counter the mayor’s power. Instead, he said, they abdicate authority to Coleman; he calls the seven council members, “the bobbleheads,” who just vote yes.

Generational politics are also in play in Ward 5. Glass takes up the cause of defending the position of some longtime city residents and accusing the city of pushing a “Millennial initiative” and packing city commissions, committees and work groups with like-minded people. He said he sees the use of city grant money for Mayor Chris Coleman’s 8-to-80 Vitality fund as an example of that agenda; that the city sacrificing basic services, like snow removal and parks, for expensive projects the city can’t afford to maintain once built.

“If you lived here 10 years, you’d have the same gripes everybody else has,” Glass said.

Yet Brendmoen sees the same spending as a positive change. She voted for the Vitality Fund, calling it a “huge win” for the city’s neighborhoods. The money became available when the city retired bonds on the River Center. Some of the money will be spent on such projects as road repairs that include space for walkers and bikers, the first phase of a proposed downtown bike loop, the Palace Theater renovation, more green space along the Green Line and completion of the Grand Round parkway system envisioned a century ago. 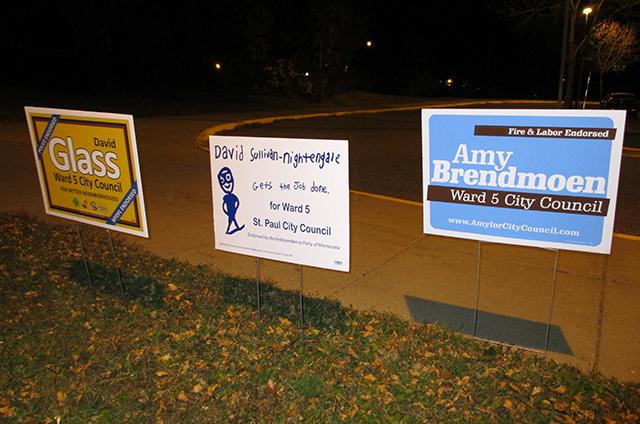 MinnPost photo by Peter Callaghan
The Ward 5 race will be a test of the city’s recent conversion to ranked choice voting.

And on it goes. Brendmoen said she would likely vote against Coleman’s call for expanding parking meters into the Grand Avenue commercial districts, saying Coleman’s office knows it “bungled that process.” But she has supported rethinking parking policies. Glass calls the move a revenue grab that was forced on merchants and residents of Grand Avenue.

Brendmoen also supports an expansion of bike lanes, including the downtown loop. Glass, who says he is a bike rider himself, said he prefers separated lanes and “calm back-street routes” to painted lanes on arterials that raise safety concerns.

How about the proposed stadium for a new Major League Soccer franchise? Glass attacks it as a giveaway to some of the state’s richest people, arguing that it should come with a commitment to build and maintain youth fields. Brendmoen said “the devil is in the details,” but that she thinks it could boost development in the Midway area and would be on Metro Transit land that hasn’t been taxed for decades.

Glass says Ward 5, which includes parts of the Como, North End, Payne-Phalen and Railroad Island neighborhoods, hasn’t received the same investment that other wards — especially downtown — have received. He puts much of the blame on Brendmoen, who chairs the city’s Housing and Redevelopment Authority. Brendmoen responds by saying few projects were “in the pipeline” when she took office and that it takes time to get the going. But she cites projects like the police training facility and the Rice Street Library to support her claim that “it’s an exciting time in Ward 5.”

Will ranked choice voting be a factor?

The Ward 5 race will be a test of the city’s recent conversion to ranked choice voting. One theory promoted by backers of RCV is that it discourages negative campaigns, because winning might depend on being the second choice of your opponent’s supporters. But neither Glass nor Brendmoen expect to be the second choice of voters who support the other.

Which brings us to the third candidate, Sullivan-Nightengale. Assuming he comes in third when the votes are initially counted, the question of who — Brendmoen or Glass — his supporters favor as their second choice could be very important in a close race.

Sullivan-Nightengale is running to promote niche issues such as rail safety and increasing the number of council members so each can represent fewer residents. At last week’s forum, he engaged the other candidates only when questioned and gave some support to the Glass complaint that the city doesn’t listen well to residents, but was far less critical of Brendmoen than Glass.

Finishing in the top-two might be difficult for Sullivan-Nightengale. He is spending very little on the race and running a low-key campaign. Brendmoen, by comparison, reported Tuesday that she has raised $85,000, which includes money from her last election $19,000 on hand. Glass has raised $60,000 and has $13,000 on hand. Glass and his wife have loaned his campaign nearly $20,000. The part-time council job pays $62,000.

From the mayor to millennials, big issues define council races in St. Paul