If the Minneapolis City Council adopts a fair scheduling ordinance with provisions anything close to what is contained in a the draft plan, it won’t just be the second such ordinance in the nation, it will also be the most-sweeping.

Only San Francisco has anything similar: a local or state law that requires employers to give advance notice of work schedules and pay employees extra for changes made within the notice period. But while the Minneapolis draft would cover every employee in the city, the San Francisco ordinance covers relatively few. Only workers for franchises — chain stores, restaurants, national banks and national supermarkets for example — that have at least 40 outlets worldwide are covered in the California city (though it does cover janitorial and security contractors for such businesses).

City estimates are that it covers less than 10 percent of workers within the San Francisco city and county limits. If the same rules were applied to Minneapolis, for example, workers at Caribou Coffee would be covered but those at Spyhouse Coffee would not. Pizza Hut, yes; Punch Pizza no.

Yet limiting the numbers and types of employers covered in the Minneapolis law is not among the changes endorsed Tuesday by Council Vice President Elizabeth Glidden and Mayor Betsy Hodges, though Glidden does not rule out further changes.

The two primary supporters of the rules said they favor shortening the time for advance notice of scheduling from 28 days to 14 days; not imposing rules that would eliminate alternative work weeks such as four 10-hour days; but adding protections against requiring an employee to both close the business at night an opening it in the morning if there isn’t adequate rest time in between.

Glidden and Hodges also support phasing in the ordinances for small businesses and offering city help in implementing the rules and using technological solutions for scheduling and forecasting work loads. Glidden said the changes result from what she called a “robust conversation” with both workers and employers. All council members and the mayor have heard from employers about the ill effects the proposed rules could have on their businesses, especially restaurants.

“It is a moving conversation and we’ll see where it all goes,” Glidden said. Backers of the fair scheduling issue — part of what is called the Working Families Agenda — say the version being discussed by the council are not yet formal ordinances. Those will already look different than the drafts initially prepared by staff.

“I will keep meeting with businesses and workers to craft a strong, workable set of policies,” Hodges said in a statement released Tuesday. “And I look forward to working with the city council as we continue to incorporate feedback from all parties into the Working Families draft proposal.”

Only chains affected in San Francisco

Glidden also expected further changes, but was not ready to limit the workplaces covered by an ordinance, as was done in San Francisco. “Part of the theory is that these are widespread practices and we are asking how do we change these practices more broadly,” Glidden said Tuesday after a council study session on the proposals.

San Francisco does not impose the rules if a workplace doesn’t open or shuts down because of loss of utilities, a threat against employees or the workplace or acts of God such as earthquakes or storms. It also does not apply when an employer needs a replacement for a worker who is sent home or was unable to work a scheduled shift without giving at least seven days notice. 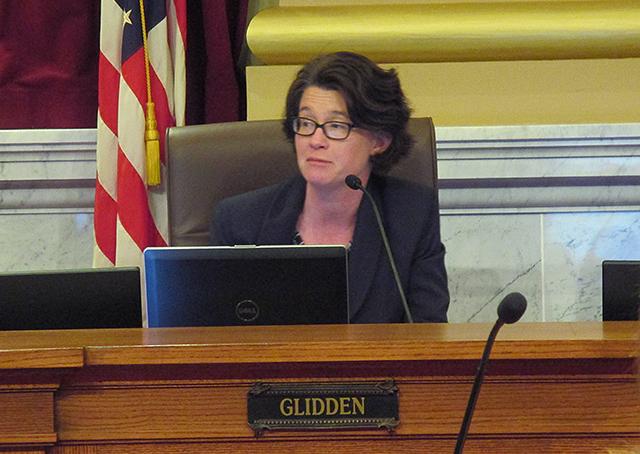 MinnPost photo by Peter Callaghan
Council Vice President Elizabeth Glidden: “It is a moving conversation and we’ll see where it all goes.”

Both the San Francisco ordinance and the Minneapolis draft exempts workers with collective bargaining agreements that often provide better worker protections. San Francisco’s law, however, does not apply to exempt employees and managers while Minneapolis’ does.

San Francisco is the only state or local government with a fair scheduling law but city staff reports that 11 state legislatures — including in Minnesota — have seen bills filed on the issue.

While limited to what it terms “formula retail” establishments, San Francisco covers more than chain stores and fast food restaurants. As defined in city code, it is any business that has at least 40 similar outlets worldwide and has at least 20 workers in the city. That would cover most familiar chain stores and restaurants but it also could include movie theaters, liquor stores, bank branches, supermarkets, financial services like tax preparation offices.

As first passed, the ordinance covered chains with at least 20 outlets. That was increased in an amendment adopted over the summer to 40.

A University of Chicago professor who has studied fair scheduling and its possible effect on businesses endorsed some of the changes being supported by Glidden and Hodges. Susan Lambert, an associate professor in the school of social service administration, told the council Tuesday that phasing in the rules is a good practice, that 14 days is adequate and that while large businesses have ready access to staffing forecasting models, small business might not.

Lambert has studied scheduling issues among large employers — mostly in retailing — and found that the types of flexibility employers think are needed don’t really change the bottom line. Lambert said employers use so-called just-in-time scheduling including last-minute cancelation of shifts and the use of on-call shifts because it helps control the number of hours worked and, in turn, costs. Without laws such as the one being considered in Minneapolis, there is no reason for employers to stop their scheduling practices.

But Lambert found that the employers she studied can predict workloads further in advance and that variations in the number of staff hours needed change over the year much less than employers think.

In response to questions from council members, Lambert said she doesn’t have good research on small businesses and there is no research on the impacts of fair scheduling laws because on San Francisco’s exists and it just took effect. But she called the reaction from the business community in Minneapolis a positive result of the drafts.

But she disagreed with those who call predictability pay a penalty. Lambert said giving employees extra pay when they must react to short-term scheduling changes is a way for the employer to share the impacts such as having to find last-minute child care. “It is like overtime pay,” Lambert told the council. “It is a premium to workers for their extra commitment and flexibility.”

Health benefits of having paid leave

“There is a strong link between health and access to paid leave,” Ayers said. “Those without paid leave — 40 percent of workers in the city (or about 133,000 people) — tend to work when sick, not take advantage of health care for themselves of their family members, not get as much preventative care.” The lack of paid leave tends to fall on lower-paid jobs that have disproportionate numbers of women and people of color, Ayers said. 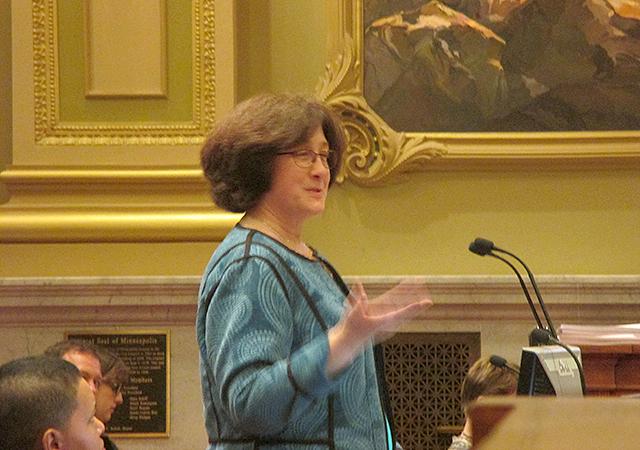 MinnPost photo by Peter Callaghan
Jeanne Ayers: “There is a strong link between health and access to paid leave.”

“It’s really something your mother told you,” Ayers said. “When you’re sick, stay home. Don’t spread it around.” There also are economic consequences as more and more workers are exposed to illnesses.

Two statistics presented by city staff show just how Minneapolis is intertwined with the regional economy, something that complicates the impact of a sick leave ordinance. Minneapolis has the largest share of jobs in the Twin Cities but even at that, the city has just 17 percent of the region’s employment. And just a quarter of the people who have jobs in the city also live in the city.

Unlike the fair scheduling issue, Minneapolis would be less of a pioneer on mandatory paid sick leave. According to A Better Balance, a proponent of the policy, four states, 19 cities and one county have paid sick leave laws.