Twice a day, in the morning and in late afternoon, the Dorothy Day Center in downtown St. Paul undergoes a transformation. Not exactly a magical transformation. But a necessary one.

During the day, a building that lies within sight of the Xcel Energy Center at one of the city’s main entrances provides meals, showers and social service counseling to hundreds of the region’s homeless and nearly-homeless.

About 5:30 p.m., following dinner, nearly everyone is sent outside while staff and some residents clean the center and prepare it for its next use. Once cleaned, hundreds of thin mats are laid out of the floors and the doors of what is now an emergency shelter are opened. Then, after what is often a fitful night’s sleep, people are awakened around 6:00 a.m., and again sent outside — regardless of the weather — so the building can again morph into a drop-in-center.

For about 250 people a night, this is home. Others are turned away because the floors are already filled, something that began happening in 2011. Another 100 or so take advantage of the meals and social services provided during the day at the center but sleep elsewhere.

The two uses for one building equals chaos, center staff say. And what was meant to be a temporary solution in the winter of 1999-2000 has become permanent.

“What you see at Dorothy Day are failed systems that show up here,” said Tim Marx, the president and CEO of Catholic Charities of St. Paul and Minneapolis. “A failed mental health system, a failed education system, a failed criminal justice system and failures in our health-care system.”

It is in response to those failures that led to Thursday’s ceremonial groundbreaking for a new Dorothy Day Center, along with an announcement that a private fundraising campaign is 60 percent toward its $40 million goal. Combined with a hoped for $60 million in state and local government funds, the money will pay for two new buildings — one devoted to emergency shelter and permanent housing and the other used for meals and social programs to help get people out of homelessness.

Phase one, the five-story Higher Ground shelter building, which will back up against the freeway off-ramps near Seven Corners, is already under way. Once completed, the center’s clients will no longer sleep on mats on the floor; they’ll be assigned bunks and lockers.

Once that building is done, in late 2016, the existing Dorothy Day Center will be demolished, with construction of a new opportunity center to begin thereafter. The six-story building will hold social services — health care, housing, mental health and education — similar to those currently offered. It will also have space for entities that partner with Dorothy Day: Ramsey County and the Veterans Administration, among others. The upper floors of the building will hold 170 units of permanent housing. The new complex will more than double the emergency and permanent housing provided in the old.

“I think everybody knows we have outgrown the facility, that the need is great, and we are not stepping up in the proper way as a community,” said Doug Baker, the CEO of Ecolab, who is co-chairing the fundraising committee. “And we aim to fix that with this campaign.” 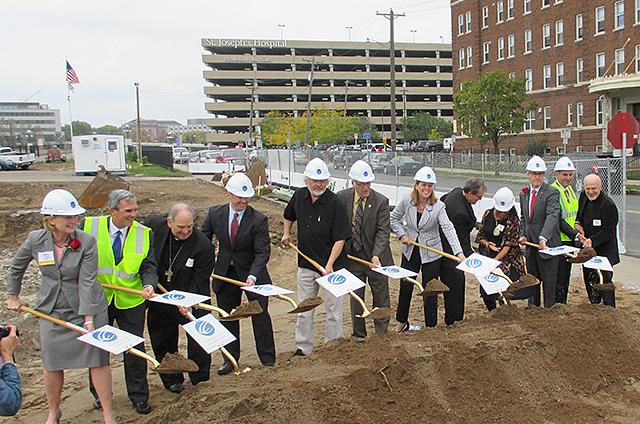 The others co-chairs are HealthPartners CEO Mary Brainerd and U.S. Bank Vice Chairman Andy Cecere. Big gifts have come from the Richard M. Schultze Foundation, The Frey Foundation, the Pohlad Foundation, the Saint Paul Foundation, the Bigelow Foundation and the Mardag Foundation. Thursday, Baker announced a $2 million donation from Target.

Gov. Mark Dayton complimented Catholic Charities and the private fundraising and pledged to support completion of the state’s contribution.

“In the midst of the growing prosperity in downtown St. Paul, this is so fitting that we set aside this space for the least of these, our brethren,” Dayton said.

Mayor Chris Coleman is leading a delegation cities in Japan and China. Before he left, he said he had confidence that the fundraising goal can be met. “The generosity of the community is so strong,” he said. “The CEO’s are taking it personally upon themselves to meet this challenge.”

A temporary solution, 15 years on

During a tour of the center, Marx tells a story of how increasing numbers of homeless people led to mission creep for Dorothy Day. The center opened at nearby Assumption Church in 1981 in response to the then emerging issue of homelessness.

The drop-in center moved into its current building in 1993. But  during the winter of 1999-2000, the city asked if Catholic Charities would be willing to open one of the rooms as an overnight shelter. It was supposed to be temporary. 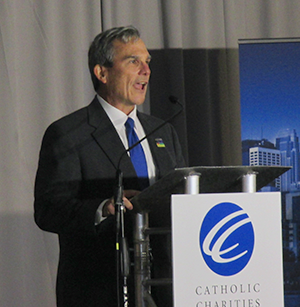 But homelessness continued to increase and the center was asked to maintain its shelter function year round. Then it was asked to retrofit part of the center to house homeless women. When homelessness continued to climb, the center was asked to open the bigger main room for people to spend the night. The use increased — especially after the Great Recession struck in 2008 — to the point where in 2011 Dorothy Day Center had to turn people away. The capacity, defined by the number of thin mats could fit side-by-side on the floors of the center, had been reached.

“There was no more room at the inn,” Marx said. “It stunk so bad in here, it was so undignified that some people wouldn’t come in and little camps sprung up outside.” A smaller brick building next door was opened up for the winter months but Dorothy Day was well over its capacity for a service it wasn’t designed to deliver.

“Catholic Charities called time out, and said we have a crisis here and called the community to action,” Marx said. Coleman convened a task force with St. Paul Foundation president Carleen Rhodes and St. Paul Chamber president Matt Kramer in the lead. The result was a plan for a new Dorothy Day Center at a different location, near Railroad Island on Lafayette Road.

It would be bigger to provide more emergency and permanent housing. It would have more room for medical care, counseling, the women’s housing center and meal service. And it would be near existing social services.

But residents of that part of St. Paul objected, arguing that the city was overloading it with too many social services. What city leaders saw as a logical co-location was seen by others as creating a dumping ground where people in need would be out of sight.

Coleman relented, fearful that a long fight would delay and possibly kill the pending plans. Going to the Legislature for state financial help while a location fight was ongoing is never a good idea. So a different approach was taken — build in and around the current center.

“Democracy works,” Marx joked of the decision not to build on the East Side. But because services had to be maintained while construction took place, a phasing was needed.

The Higher Ground shelter in Minneapolis is on the edge of downtown, west of Target Field. The Dorothy Day Center is within downtown — and is much more visible.

“It really presents specific opportunities and specific challenges,” said Marx, who is a former deputy mayor of St. Paul and state housing commissioner. “We are going to have to work extra hard and have worked extra hard on how we design and how we integrate our programs and our buildings so it can be positive advance for the city.”

What he means is that while some in the community don’t like seeing people gathered on the sidewalks and parking strips around Dorothy Day, the clients have told staff that they don’t especially like being seen, either. The new buildings are designed to be oriented toward each other with open spaces in between on either side of North Main Street. There will be canopies for weather protection.

“When the shelter closes and the opportunity center opens there is kind of an internal courtyard where people can have their own space and be dignified and not have to be on display for the rest of the community,” Marx said. And, as is currently required in Minneapolis, residents sign a good neighbor agreement not to panhandle, not loiter, not to be a nuisance in the neighborhood.

“Obviously we have to be smart and compassionate with how we enforce that,” Marx said. “But our experience and our philosophy is if you treat people with dignity and also have expectations of them they will treat their surroundings with dignity.” 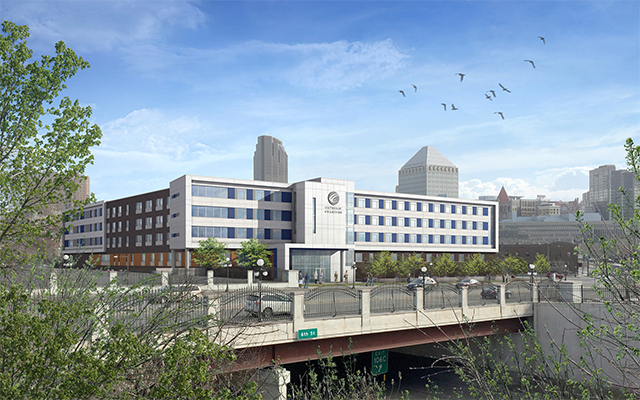 Coleman said the designs for the new center meet two seemingly conflicting goals. “The leadership of the city said we need to do something about the problem but we don’t want to hide people and pretend the problem doesn’t exist,” Coleman said. But the design lets people who need the services of the center have the privacy they say they want.

Contrary to concerns, maintaining Dorothy Day at its current location hasn’t discouraged private investment. The long-neglected area of downtown is in the midst of a construction boomlet.

Directly across the street is the parking lot that the city calls the Seven Corners Gateway site. The Opus Group is working with the city to complete a proposal to build a mixed use development to include a hotel, market-rate apartments, retail and public spaces. And just down West 7th Street, Opus has begun construction on a an apartment and retail complex on a block that long held 7 Corners Hardware.

Coleman said the private investment in the area shows that the two uses can co-exist. “There’s no question it will work,” Coleman said.

A new day for the Dorothy Day Center