It’s a little hard to have a dialogue about a controversial set of proposals called the “Working Families Agenda” when participants can’t even get past the title.

The agenda itself, put forward by the Minneapolis City Council, contains a series of proposals that would require that workers in the city have the ability to earn paid sick leave. It also calls for detailed rules about how workers are scheduled. The ideas are all part of a national movement to prod local governments to do what federal and state government haven’t done or can’t do: increase protections for lower-wage workers.

But at two different meetings of small business owners Thursday, concerns were raised even before anybody got to the details of the draft proposal.

One of the meetings was a listening session with Council Member Elizabeth Glidden and business owners that was sponsored by the Southwest Business Association. In her introductory remarks, Glidden said she had heard from some who object to the use of the name Working Families Agenda because it implies a divide between employees and employers.

The other meeting was a press conference by a group of small business owners who support the concepts in the agenda, but want a voice in making the details more practical. The event turned into more of a debate when business owners opposing the proposal — who had also shown up — voiced objections.

‘Let’s talk about how we can do this’

The Main Street Alliance, which has affiliates in 14 states, has supported issues such as higher minimum wages and paid sick days and opposed fast track authority for the Trans-Pacific Partnership trade agreement. The Minnesota branch generally supports the draft proposals released last month by city staff, but says the plan did not have adequate involvement from business owners.

The alliance has also proposed changes to the proposals. For example, while the current draft says employers must post schedules 28 days ahead and pay employees extra when schedule changes are made, Main Street suggests 14 days would be more workable. It also would like the requirements phased in for small businesses, perhaps over 18 months.

The Working Families Agenda is a response to complaints about just-in-time scheduling, in which employees might have little notice that they will be called into work or who have work shifts canceled at the last minute. The first puts pressure on workers with other jobs or with children who must find child care. The second costs workers income.

“Let’s talk about how we can do this,” said Danny Schwartzman, who owns Common Roots Cafe on Lyndale and is part of the Main Street Alliance. “Let’s not say ‘no.’ Let’s say what can we do. What’s practical. What works for employees and employers, especially small businesses in our community.” 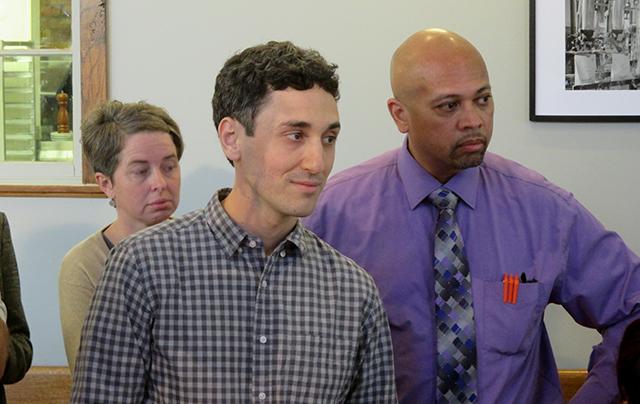 But business owners who are not members of the alliance but who showed up at Schwartzman’s cafe saw little in the drafts of the Working Families Agenda that they supported. Toledo mentioned the effects on restaurants with large patios, such as Psycho Suzy’s Motor Lounge in Northeast. The restaurant might schedule wait staff and kitchen staff in anticipation of a crowded patio but have to close it because it rained that day. A tow-truck operator told Glidden at her meeting that he doesn’t know the weather four weeks ahead of time and risks not having enough workers for a snow emergency.

According to the current draft of the rules, workers would be able to refuse shifts that were not on the 28-day schedule without fear of retaliation, and would have to give written consent should they choose to accept the hours. Even then, they would get an added hour of “predictability pay.” They would be owed predictability pay totalling four hours or the duration of the shift, whichever is less, for shift cancellations made with less than 24-hours notice.

‘Why does everything have to be a penalty?’

The concepts have the backing of most, likely a majority, of city council members as well as Mayor Betsy Hodges.

“Why does everything have to be a penalty, and such a one-sided penalty?” said Deepak Nath, a partner in Empire Entertainment. “Are they going to pay us predictability scheduling pay if we schedule them and they don’t show up?”

Nath also complained that the city had not reached out to small businesses, and that council seems intent on passing the ordinances by the end of the year. The comment period on the city’s webpage ends Oct. 16, and Glidden has said she would like ordinances voted on by December.

“We want to be the industry that this is our business model and we build our business and we have to take care of our employees,” said Nath, who said he was representing the Workforce Fairness Coalition, a Minneapolis Regional Chamber of Commerce-sponsored coalition of business groups, whose stated goal is to “push back against a ‘solution’ in search of a problem.”

“There’s a lot of good that can come out of this, but there’s also a lot of bad,” Toledo said. The bad, he said, was that it could hurt their businesses so drastically that “we have to make changes that affect our employees so much that it hurts their livelihood, it hurts their incomes and it hurts their families. So now this is the working AGAINST families agenda.”

At times, Schwartzman became a stand-in for city officials or backers of the drafts, something he resisted. “The ordinance isn’t written yet, so I don’t support what isn’t written.”

At the earlier meeting, at City Church, about 100 people filled a small meeting room to tell Glidden how the ordinances would hurt their businesses. Molly Broder, who has owned restaurants at 50th and Penn for 33 years, said she offers health insurance and paid time-off to her workers.

“But I could not have done that in the first five years or even the first 10 years of my business,” Broder said. Gail Mollner, co-owner of Blackbird Cafe, said she recently staffed up for a large dinner party that cancelled at the last minute. She kept the staff working, but said “I lost money that day. Where’s my predictability pay?”

Main Street Alliance members tried to respond to the angry response of those opposed to the proposals. Julie Kearns, who owns Junket: Tossed and Found, said during the back and forth with other business owners that she understood the emotions they expressed, but asked for some patience.

“It’s a draft, so it is not done yet,” Kearns said. “So we’re here. It’s later than it should have been. The language was poorly written, and the language talks about burdening us and absolutely we’re responding with fear. It’s a normal response. It’s a fear response.” But she asked the business people to think about the workers who would benefit from the changes.

“This will change how I do business, but it’s not about me,” Kearns said. “And it’s not about my employees … It’s about thousands of other employees that other businesses are employing in our city that don’t have the protections they need.”