It looked exactly like a public forum on affordable housing, complete with a congressman and a cabinet secretary listening to concerns and complaints from residents and activists.

What it turned out to be, though, was something else — more like the opening session of a peace conference between warring factions.

That’s more of what U.S. Rep. Keith Ellison (DFL-Minneapolis) seemed to have in mind last week, anyway, when he invited experts and residents to talk about two approaches to the same crisis. Before the forum began, before Housing and Urban Development Secretary Julian Castro could speak to the several hundred people gathered at southeast Minneapolis’ Mayflower Church, Ellison urged them “to come here today not with an eye toward pushing your own view, but with an ear to listen to what others think. Allow the process of engagement to work on you.”

Why would Ellison need to tell people who all agree that there’s an affordable housing crisis in the Twin Cities to listen to the other side?

Because while nearly everyone at the event seemed to support more investment in affordable housing, they were split over a question that has become central to housing policy in the Twin Cities and across the country: Should regional planners push for more housing in mostly white suburbs to give low-income people the same choices others have; or should they continue to build that housing primarily in areas where low-income people already live?

On one side are the integrators: those who think affordable housing policy and funding should be spent in ways that reverse the over-concentration of low-income housing in increasingly segregated neighborhoods. Such areas are already struggling with low economic prospects, high crime and poor-performing schools, the argument goes. At the same time, so-called high opportunity neighborhoods and suburbs don’t have enough affordable housing for those who who want to move there.

The integrators have been heartened by two recent federal decisions. One was a Supreme Court ruling upholding the legal authority of plaintiffs to assert that housing policies and practices can be illegal even if they aren’t intended to discriminate. If policies have a disparate negative impact on racial minorities, they can be found in violation of fair housing laws and statistics can be used to demonstrate such impacts.

The other favorable decision was new HUD rules requiring state and local housing programs to “affirmatively further fair housing,” which means those programs must  act to reduce segregation and assure that minorities can live where they want.

Critics of this approach are what might be called the equity-in-placers: those who think policies that create affordable housing in high opportunity areas (think mostly white neighborhoods and newer white suburbs) will end up moving money there along with people. Such disinvestment could sentence inner-city and first-ring suburbs to continued decay. Such advocates also argue that new affordable housing projects in the city— especially those near new transit lines — are helping revitalize neighborhoods. Those projects should be praised, not criticized.

As Castro summed it up: “We cannot forget our older, urban, distressed neighborhoods and the people who live there. At the same time we know that mobility is important.” 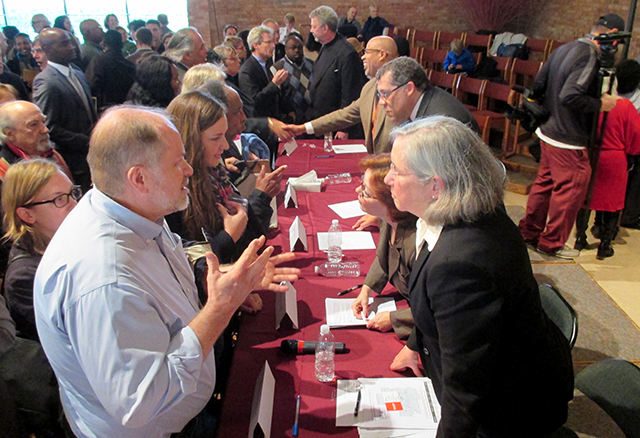 MinnPost photo by Peter Callaghan
Panelists at a recent forum on affordable housing speaking one-on-one with some of those who attended. From right foreground, they are state commissionor of Housing Finance Mary Tingerthal, Richfield Mayor Debbie Goettel, Project for Pride in Living President Paul Williams and Met Council Member Gary Cunningham. Standing at the rear of the table is St. Paul NAACP Vice President Yusef Mgeni.

In a phone interview from Washington, D.C. Wednesday, Ellison said that both methods are necessary. “There are people in North Minneapolis who might want to live in Plymouth or Eden Prairie or Edina or Wayzata, and therefore those places should be doing affordable housing too,” he said. “But if all we do is mobility strategies, what happens to the neighbors who are left behind, and what happens to the social capital of those who don’t want to move?

In the Twin Cities, the debate has been intensified by two formal complaints filed with the Department of Housing and Urban Development. One is focused on the cities of Minneapolis and St. Paul, as well as their joint Housing Finance Board, on behalf of three Minneapolis neighborhood groups and the Metropolitan Interfaith Council on Affordable Housing (MICAH). The other is against the Metropolitan Council and the Minnesota Housing Finance Agency, on behalf of MICAH and three first-tier suburbs: Brooklyn Park, Brooklyn Center and Richfield.

Both complaints raise the same issues: that the government entities are violating federal housing law by placing too much of the region’s affordable and subsidized housing in areas that already have most of that housing. The effect is to exacerbate economic and racial segregation and therefore is in conflict with federal requirements to “affirmatively further fair housing.”

At the Mayflower conference, Ellison tried to broaden the discussion beyond the issues that have been raised in the complaints. “One of the reasons I wanted to have this conversation today is to lift us outside the confines of the complaint and discuss the broader issues of how affordable housing can enhance prosperity across the Twin Cities,” Ellison said. “I urge you to not be chained to the complaints … the complaints lock us into a zero sum where some win and some lose.”

Ellison said he doesn’t see solutions in the HUD complaints, though he said he doesn’t oppose them either. “No matter what happens, we’re still gonna be left with trying to figure out and plan for how to move forward in our community,” Ellison said Wednesday.

That’s often easier said than done, as the panelists chosen to talk at the event last week demonstrated. One panelist, Richfield Mayor Debbie Goettel, is a lead complainant against the Met Council and the Housing Finance Agency. Another, Paul Williams, the president and chief executive officer of Project for Pride in Living, has been involved in building many of the projects at the center of two HUD complaints: new affordable housing projects in inner-city neighborhoods.

Goettel said first-tier suburbs like Richfield have taken their fair share of affordable housing, and Minneapolis and St. Paul have taken more than their share. But white suburbs haven’t taken enough. “These city neighborhoods and first-ring suburbs experience greater poverty, lower housing values, which translate to a lower tax base,” said Goettel. “They erode the quality of life and our schools.”

Maybe the political mantra of equity shouldn’t be the goal, she argued: “It’s not about equity. It’s about access. Equity could lead to separate-but-equal and the segregation we’re seeing in our communities today. Access is about opportunities, higher-paying jobs, better schools and safe communities. That is what is needed.”

She said that developers — both governmental and private — build in already impoverished areas because it is easier: “It’s harder to produce units in affluent communities. It costs more. They complain. They protest. They threaten lawsuits.” But if state and federal governments withheld funding for parks and infrastructure from communities that don’t increase their affordable housing stock, things would change.

Williams took issue with suggestions that groups like his are doing something wrong — or that they build in the inner-city and older suburbs because it is easy. Instead, the former deputy mayor of St. Paul said they do it because it can make those communities better.

And then he touched a sensitive spot, asserting that a change in housing policy would require people to leave places where they grew up and still live and move to wealthy and white areas, where they aren’t comfortable. “Why is it always my folks who gotta get shipped out?” he asked to loud applause and cheers.

That brought a quick response from Ellison. Cheering is tempting, he said, “but when you start whooping it up real high the people who don’t agree with that, they harden. And then you harden. And now we have that ugly, bifurcation going.”

A few other speakers supported increasing integration in the region through affordable housing and fair housing laws. Met Council Member Gary Cunningham is the president and CEO of the Metropolitan Economic Development Association, a program that helps entrepreneurs of color. He spoke of the region’s “embarrassing and shameful situation” reflected in statistic that show vast disparities between blacks and whites in education, economic prospects and health. The homeownership rate for blacks, at 24 percent, is among the nation’s lowest. “While we pat ourselves on the back for what we’ve done, people are suffering in our community,” Cunningham said. He blamed a lack of political will for changing housing policies.

“Most of us know that people fought and died for our right to live where we wanted to live,” Cunningham said.

St. Paul NAACP vice president Yusef Mgeni said in his neighborhood of Summit-University, one in four housing units is subsidized. Yet in adjacent neighborhoods, the rate is one in 50. Such segregation leads to other problems, particularly in education. “When you stack poor people upon poor people like cordwood,” the schools they attend have “significant challenges for those students, for those staff and for those communities.”

A survey of affordable housing clients showed that a vast majority place safety and quality schools at the top of their priority list.

“We need to keep that in mind as we locate affordable housing and homeownership,” Mgeni said. And he added: “I’m not in favor of people being forced to live anywhere. But the difference between diverse communities and inclusive communities is that one has narrow geographic options and the other provides choice, options, alternatives, access and affordability.”

On Wednesday Ellison said he wasn’t sure how many people changed their minds after listening to the panelists and residents who spoke. But he thinks he did get some to think about the problems more broadly.

“We’re talking about how, not whether, so there has to be some common ground,” Ellison said.

A lot of people believe the Twin Cities needs more affordable housing; a lot fewer agree on where to build it