While seniors in Minnesotans enjoy a comparatively good health-care system, it is expensive, fragmented and complicated, panelists said during an event designed to explore how Minnesota can better care for its aging population. And it reflects doctors, patients’ and families’ inclination to take all possible measures at the very end of life, spending enormous sums of money when death is likely near.

The panel discussion, entitled “Preparing for the ‘Silver Tsunami,’ ” drew more than 120 people to the Northrop’s Best Buy Theater on the University of Minnesota campus.

The panelists, five leaders from various sectors in the state’s health and aging-services community, tackled where the Minnesota health-care system stands now in comparison to other states — and what should be done to prepare for the approaching retirement of the baby-boom generation. Mary Jo George of AARP, state Sen. Tony Lourey, Gayle Kvenvold of LeadingAge Minnesota, Dawn Simonson of Metropolitan Area Agency on Aging and Dr. Thomas Klemond of Park Nicollet Health Services also put forward ideas to educate consumers in navigating the system, to encourage an affordable model of person-centered care and to advance relationships between doctors and families.

Organized by MinnPost, the event was sponsored by UCare and moderated by Susan Albright, the managing editor of MinnPost.

“Minnesotans — through state, community and individual actions — must get ready for what we know is going to be a gigantic wave of elders,” Albright said in her opening remarks before she asked the panelists to assess how Minnesotans are doing in preparing for the demographic change.

“We’re not doing all that bad if you look at some of the data,” George said. Citing a study, she added that Minnesota has in fact the best health-care system in the nation: “It’s impressive that Minnesota, over all, is No. 1. And I think we have to be proud of that.”

A need for livable communities

A closer reading of the study, however, shows some troubling concerns about the long-term health-care system, George said. Many older people with low care needs live in nursing homes and others are unnecessarily hospitalized.

“Our system is way too fragmented, way too expensive and way too complicated for consumers to navigate,” George told the audience. “We have to create the livable communities so that we have the supports so that people can live in their homes, because that’s what people want to do.”

Lourey said that he’s concerned about the future of Minnesota’s health-care system, especially since more and more people are retiring and fewer people are replacing them in the work force. Kvenvold echoed the sentiment: “I’ve been traveling the state for the last couple of weeks, and we have pretty deep shortages of caregivers in regions of our state — and that’s the flipside of what we call the ‘silver tsunami.’ ” 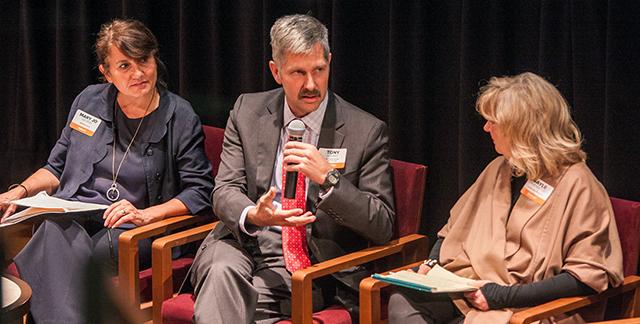 And when Minnesota loses workers, Lourey added, the consequence is that taxpayers won’t be able to sustain the system that’s currently in place. “About two-thirds of the long-term care falls on the public support system,” he said. “And that becomes unsustainable as people age and need the supports.”

Lourey encouraged more engagement with communities and aging individuals to improve the system. “It’s a system that we all have to take ownership of and do our best to move away from,” he said.

‘We are a fighting culture’

Panelists also discussed end-of-life care planning, with some of them encouraging the public to consider engaging in more such conversations.

Lourey said people are fearful of the conversation and of getting old. “The words that we use are very important. And when we start talking about choices about how we die, you know, you’re going to say, “No, no, no. I’m not going to go there.”

He added: “It’s more about choices about how we live as we age. And that’s some of the things we’re really trying to deliver through the legislature.”

Lourey shared a story with the audience about his grandmother, who “didn’t have much time left” and whose physical and mental health had dwindled. One day, Lourey said, his grandmother fell and broke a hip.

Three days after the hip was replaced, she died. “This was a complete misuse of the health-care system and not one that she would have chosen,” Lourey said.

Dr. Klemond, who chairs the Palliative Medicine and Community Care Department at Park Nicollet, expressed both hopefulness and worry about the current care system.  “We’re a fighting culture,” he said. “We are a culture that responds to challenges. And that’s what gives me hope, as I look at all the good work that has been done already.”

“But the fighter culture is also a bit of an enemy to us, especially in a world where everyone does die ultimately,” he added. “And we have this sort of phenomenon of the unwritten rule that you must do what you can to live or else you’ll be perceived as weak or a failure. And we’ve set up our system with that in mind. Our system is a product of our culture and product of our values. So there’s often no honor in a choice not to continue treatment. And there’s a lot of fear.”