What has been something of an abstract idea — how do you improve transit connections between downtown St. Paul and the airport? — is about to become a lot more specific.

And with specificity comes controversy.

The idea of running something other than the No. 54 bus along the river bluff somewhere around West 7th Street, crossing the Mississippi River and getting into the airport has been around for decades, of course. But an advisory committee taking a reinvigorated examination of the various modes and routes possible for what’s known as the Riverview Corridor is finally getting close to making recommendations.

At a meeting last week, the project’s staff presented various options and asked a committee of elected officials and key regional players if they could focus attention on items that have a chance of making it into the locally preferred alternative next fall. In a month, the committee will narrow those choices ever further.

“We’re trying at this initial level to get rid of the ones that are bad,” said Mike Rogers, manager of transit projects for the Ramsey County Regional Rail Authority. “So if it’s a bad one that can’t meet the purpose and need at this initial level, it should just go away so don’t we spend any more time, any more resources looking at it.”

The options include just about every idea for upgrading transit on the 12-mile corridor: How and where should the system cross the Mississippi River? How should it get from St. Paul’s Union Station to the western edge of downtown? Which route should it take from there to a river crossing? How could it serve the planned redevelopment of the massive Ford plant property? And how should it get into the airport — by tying into the existing Blue Line or some other way, such as along the inbound roadway?

No decisions were made last week, but the staff work done so far — measuring each of the choices against the “purpose and need” of the project (enhancing mobility and access to jobs, education and to further economic prosperity) — does provide some clues to where it’s headed.

The route that appears to meet most of the criteria, for example, is West 7th Street. Using I-35E doesn’t have much economic development potential, and has limited access. Shepard Road is hemmed in by the bluffs which limits economic development. And the existing Canadian Pacific rail tracks have limited access because of Shepard Road, the bluffs and the limited number of cross streets.

As far as mode of transit, arterial and dedicated-lane bus rapid transit (BRT), light rail transit and something called diesel multiple unit trains were said to meet all the service criteria. (Diesel multiple unit trains are self-powered multi-car trains that can run on existing rail lines or new track without the need for electrical power connections.) Highway BRT, modern streetcar and commuter rail meet most but not all of the criteria.

The ‘gorilla in the room’

Running light rail on West 7th and crossing the river on the Hwy. 5 bridge has been the consensus view from members of the public who attended open houses and other community meetings. West 7th is how the No. 54 bus currently takes passengers from the city to the airport. But the closer the committee gets to that choice, the louder the concerns will be, said St. Paul Council Member Dave Thune.

Any LRT route that takes away parking on West 7th Street or leads to lengthy construction-related closures would be fought aggressively by businesses there, he said, referring to the potential loss of parking as the “gorilla in the room.”

In fact, discussion about using West 7th as an option 15 years ago ended when neighborhood opposition coincided with budget cuts at the state level. Backers are aware of the history, and have been hoping to head off similar opposition this time.

“We talk about residents, bicyclists, historic sites, housing, but I don’t see any consideration for existing businesses in this initial screening,” said Pat Mancini, the owner of Mancini’s Char House and Lounge and a business representative on the committee. “It looks like the analysis is showing that West 7th Street is a very favorable option for whatever mode we choose.”

A river runs through it

Other options raised other concerns. Matt Kramer, president of the St. Paul Chamber and a member of the committee, wondered why the group wasn’t considering potential capital costs as it whittles down the choices. If an alignment requires a new bridge over the river, for example, that would likely make it unaffordable. So why, he asked, should it stay on the table?

Rogers said that since there has been no engineering work on any alignment, there is no basis yet to make decisions about cost. But Hennepin County Commissioner Peter McLaughlin said it wasn’t a good idea to make a significant decision on alignment, which is expected to happen sometime next summer, without knowing how to cross the river. The staff and consultants have not yet examined whether the existing bridges can carry the load of light rail or streetcar. 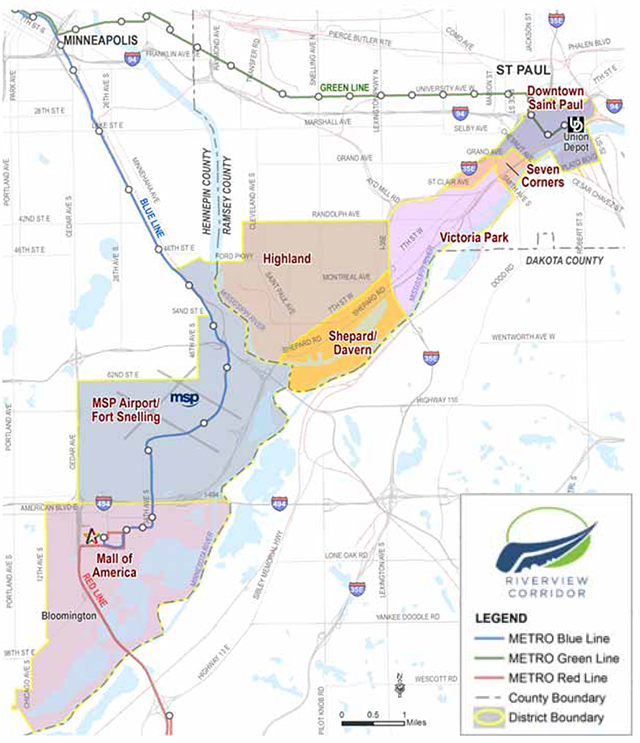 “If there’s something that’s gonna blow this thing up, it’s getting across the Mississippi River,” McLaughlin said. “We could do a tremendous amount of work and then run into this dead end in terms of how you get across the river … I don’t know how you have a locally preferred alternative before you have some notion if your bridge option actually works.”

April Manlapaz, the project manager for engineering consultant AECOM,  said there will be more information available on bridges before the committee makes final recommendations on route and mode. For example, she said staff will look at existing bridge inspection reports to assess whether they can bear the weight of light rail or streetcars. If not, the committee will have an estimate of the costs to enhance the bridges available before the locally preferred alternative is chosen.

All alignments are complicated by the need to cross over and through two significant historic and cultural sites of the region — the Mississippi National River and Recreation Area and Fort Snelling.

Some alignments could also have impacts on Minnehaha Park. Kristin Beckmann, deputy mayor of St. Paul, said the mayor’s office has been receiving calls of concern over disruptions to the national park areas. Rogers said early talks with the park service and the state historical society did not identify any “deal killers” as far as the bridge crossings. Talks are continuing, he said.

Getting into the airport present other issues. Bridget Rief, director of airport development for the Metropolitan Airports Commission, said the airport will be supportive of any route that ties into the existing Blue Line tunnels. It would not be in favor of any rail lines on the inbound roadway. Such an alignment would be “a non-starter,” she said.

“We just don’t have the space available for rail to come in off Highway 5,” Rief said.

Some committee members said the solution might come via some sort of hybrid system. While modern streetcars are often used for shorter trips and have less capacity and lower speed, they don’t have to be limited to those factors. Peter Wagenius, policy director for Minneapolis Mayor Betsy Hodges, said there are streetcars that can run on the same tracks as current light rail trains and at greater speeds..

“There’s a difference between the tool and what you choose to do with it,” Wagenius said.

McLaughlin said a streetcar-type vehicle could run amidst traffic on West 7th and therefore not require removal of parking. It could then move to separated tracks and run at higher speed once it reaches the river. The Blue Line, for example, makes frequent stops downtown and then picks up speed and stops less frequently as it gets closer to the airport. And Tim Mayasich, director of the regional rail authority, said technology for rail equipment is improving. Dallas uses cars with battery packs so that the electrical power systems that are needed for most systems could have gaps — over bridges, for example — that make them more flexible.

Thune said he was encouraged by what he heard. He assumed streetcars would not be chosen because they are more common on shorter routes but that LRT would take up parking on W. 7th and lead to crippling public opposition.

Ramsey County Commissioner Rafael Ortega, who also chairs the county regional rail authority, said he thinks the group can find the answers. “Not every line is the same and this one is more difficult than the others,” Ortega said. “We have to be creative…if we have to study another option that mixes and matches, then we will do that.”

At one time, Riverview could have been one of the first light rail projects in the region. Now it would have to get in line behind two other pending projects: the Southwest extension of the Green Line into Eden Prairie and the Bottineau extension of the Blue Line into Brooklyn Park. If the committee recommends a system such as light rail, BRT, a streetcar or some hybrid, it will be reviewed by the local governments along the corridor. If they approve, the Metropolitan Council will decide whether the project should be included in the region’s Transportation Policy Plan and be taken over by the Met Council.

As with the other projects, funding is undetermined. A new president may have different views about funding rail projects than President Obama. And Republicans in the state Legislature continue to oppose any state transportation money for Twin Cities transit projects.