The people putting together the Twin Cities’ fourth light rail project, the one currently known as the Bottineau LRT, knew the cost was going to go up — and they’ve known it for months.

One reason is that the previous estimate of $1 billion was always something of a place saver, put there only after preliminary calculations were done early in the planning process. As almost everyone involved knew, subsequent scoping and engineering would produce a more accurate, and higher, price tag.

And from there, political decisions added both benefits and costs. Towns want more stations and more park-and-ride facilities and overpasses rather than surface crossings. That $1 billion was never going to be enough to build the line.

During a July bus tour of the route for members of a Metropolitan Council committee, Dan Soler, project director for the extension, said: “The main message that we’d like to get across … is that we are at a very early stage, that the dollar amount that’s been set for the estimated cost of the project is based on a very preliminary identification of risks and scope items, and as we continue to develop this we’ll continue to update those.”

In fact, the political backers of Bottineau — an extension of the Blue Line that will run between Target Field Station and Oak Grove Parkway in Brooklyn Park — said in midsummer that the number for the 13.5-mile, 11-station line would probably be closer to $1.5 billion when the project was updated.

But those disclaimers didn’t really take. And attempts to inoculate the project against criticism that, like Southwest LRT, it was facing cost overruns and budget bloat, didn’t make much difference. “Blue Line estimate jumps by $500M,” read the headline in the Star Tribune. “New price tag for Bottineau extension stands at $1.48 billion.”

All true. And the article included quotes from Met Council officials saying how this was predicted and just part of the process. But members of the committee of council and local officials charged with overseeing the line reacted as much to the news coverage — and the public reaction they feared it might spur — as the budget number itself.

“I have absolutely no problem with these new estimates at all,” said Met Council member Lona Schreiber, who also serves on the corridor management committee for Bottineau. “But it always opens us up to criticism that there is some cost creep that’s going on and that’s not at all what happens.” 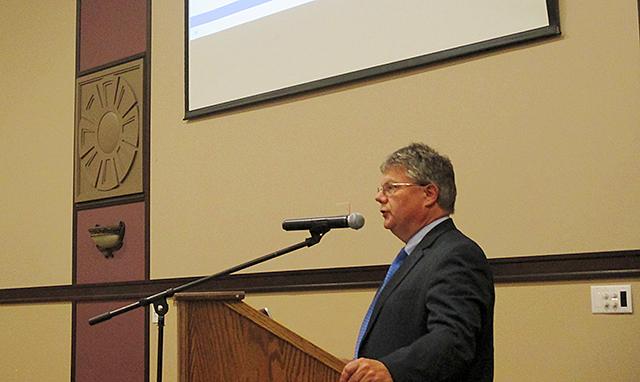 MinnPost photo by Peter Callaghan
Dan Soler, project director for the extension: “The main message that we’d like to get across … is that we are at a very early stage, that the dollar amount that’s been set for the estimated cost of the project is based on a very preliminary identification of risks and scope items, and as we continue to develop this we’ll continue to update those.”

“It’s unfortunate that the media wants to pick up that there’s some spending going on that we weren’t aware of, and that’s not true,” Schreiber said.

And Peter Wagenius, who represents Minneapolis Mayor Betsy Hodges on the corridor management committee, said the mayor agrees with Schreiber that the budget numbers are not surprising. “We just know more than we knew before,” Wagenius said. “Obviously this kind of number makes news.”

Some of the increase reflects construction challenges that were revealed by what project staff calls advanced engineering. For example, the wetlands next to BNSF tracks north of Olson Highway do not make for a solid foundation for a rail line, and the staff now proposes sinking pilings into the soft soils beneath the ponds and building a bridge on those pilings.

The route will also need eight light rail bridges instead of five. Plans also call for four park-and-rides rather than three; an overpass between a parking facility and the station at 63rd Avenue to make it safer to cross freight tracks; and the reconstructing of five roadway bridges instead of one.

And rather than a partial rebuild of Olson Highway to accommodate light rail tracks down the center, staff now thinks it will need a full reconstruction between I-94 and the BNSF right of way that runs between Golden Valley and Minneapolis.

So while a lot of the added cost is due to unknowns discovered as the project advanced, some are add-ons to enhance service, safety and relations with the cities along the line.

So if the $1 billion number wasn’t realistic, why use it at all, wondered Schreiber?

Soler said it would be hard to imagine describing the alignment of the proposed line being studied in the draft environmental impact statement without someone asking how much it would cost. The Federal Transit Administration also requires an estimated cost when the draft EIS is submitted for review, he said. 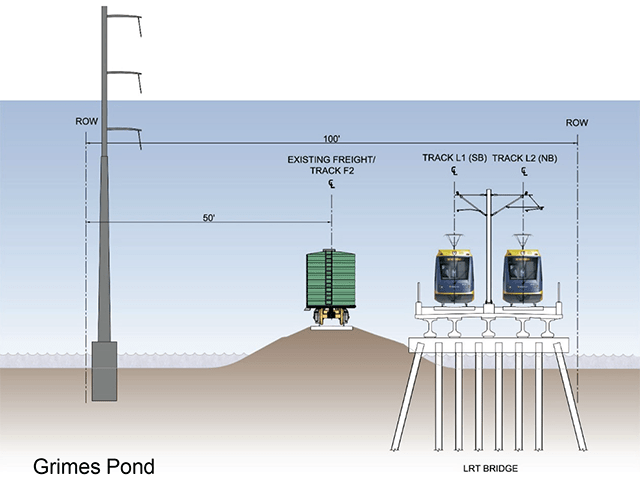 Courtesy of the Metropolitan Council
The Met Council hopes to minimize floodplain impacts by retaining freight rail on the existing embankment and constructing new LRT bridges across Grimes Pond.

Like other regional light rail projects, this one began under the sponsorship of a county rail authority, this time, Hennepin. It was the county that crafted the $1 billion cost estimate in conjunction with the draft environmental impact statement.

At least one committee member was alarmed by the higher budget number. Anoka County Commissioner Scott Schulte represents the Counties Transit Improvement Board, the five-county agency that collects and distributes the quarter-cent transit sales tax.

“C-TIB is in for 31 percent of this, so this is a hit to C-TIB of $143,000,500,” Schulte said. “I know my colleagues on C-TIB are going to ask me if everyone in the room understands that this is $143 million additional dollars that we weren’t expecting in our budget and wondering if this  $1.448 billion should be a top number now and it shouldn’t go any higher.”

From the experience with the other light rail lines, cities that must give municipal consent to the alignment often get concessions in exchange for that consent, Schulte said. “C-TIB is going to have a problem with that. So I think we need to have a very frank discussion at some point as to whether 1.448 billion is the top or whether it’s going higher than that.”

Schulte’s comments were not speculative. Earlier in the same meeting, Golden Valley Council Member Andy Snope had said he would like the project to include a complete rebuild of the intersection at Theodore Wirth Parkway and Golden Valley Road. 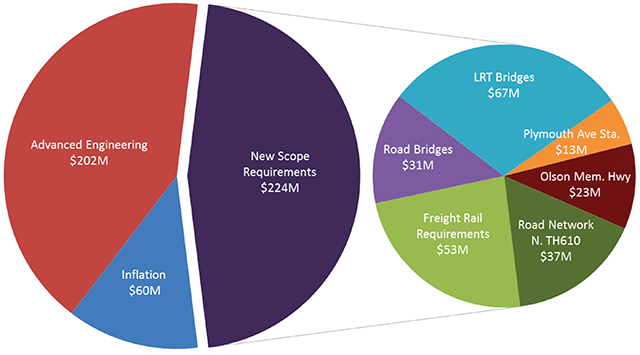 “We think this is a must,” Snope said. “There’s vehicle traffic, pedestrian traffic, bicycle traffic and now with light rail going through there it’s going to be even more.” He also asked for better bike and trail connections, something echoed by Minneapolis Park & Recreation Board member Meg Forney. (The Park Board will consider a resolution Wednesday asking that both stations, the rebuilt intersection and park and trail connections be funded as “critical elements of the project.”)

Later, Snope asked that Sochacki Park, which will be used for construction staging, will not only be brought back to its existing condition, but be improved as part of the project.

And while the budget includes costs of meeting whatever demands are made by BNSF to use its freight right of way, those negotiations have not been completed.

The corridor management committee will vote on the final alignment and budget on Nov. 12. That plan will be presented to the Met Council Dec. 9. The schedule for municipal consent will also be approved then, something that will happen over the first quarter of 2016.

If approved by the federal government and funded by the state of Minnesota, Hennepin County Regional Rail Authority and the Counties Transit Improvement Board, construction could begin in 2018 with an opening set for 2021. It is forecast to carry 27,000 weekday riders by the year 2040.