When the Minneapolis City Council last talked about the National Initiative for Building Community Trust and Justice (NIBCTJ), community-police relations was a significant issue in the city — but not yet a crisis.

That was in June, when the council heard how Minneapolis was one of just six cities nationally chosen for a three-year, $4.75 million Department of Justice initiative aimed at finding ways to rebuild trust between police departments and their communities, especially communities of color.

But what had been an academic discussion in June has gotten much more real. And when the council’s committee of the whole received an update on the program on Wednesday morning, the death of Jamar Clark and the resulting protests permeated the discussion as a clear and obvious example of the problems that the national initiative is intended to respond to.

The death of Clark also makes what was already a high climb for the program even more difficult. Within hours of the committee of the whole meeting, at a city council budget hearing Wednesday evening, Mayor Betsy Hodges proposed an amendment that would have put more money into training police in procedural justice and implicit bias. Yet the amendment also would have put $605,000 “in one-time spending for safety and accessibility improvements at the Fourth Precinct to better serve officers and the community.”

To those who have been protesting the death of Clark, the money looked like it was meant to fortify the precinct, and most of those who testified during the budget hearing were adamantly opposed to the measure.

When the council later began considering amendments, the training money passed. But the precinct money didn’t — it was never even offered for consideration. There was no debate among the council and no vote taken on the proposal.

While Wednesday’s earlier meeting — called to given an update on the national criminal justice initiative — had the appearance of a routine session of the committee of the whole, it was hardly routine. The committee, which all 13 council members serve on, typically meets to review the agenda of the upcoming regular council meeting and to hear general briefings on topics that aren’t before other committees.

The announcement of the committee’s agenda, therefore, isn’t normally the subject of a press release issued by the city. And its meetings do not often, if ever, draw the attendance of Mayor Betsy Hodges. Nor are they normally opened up for public testimony. 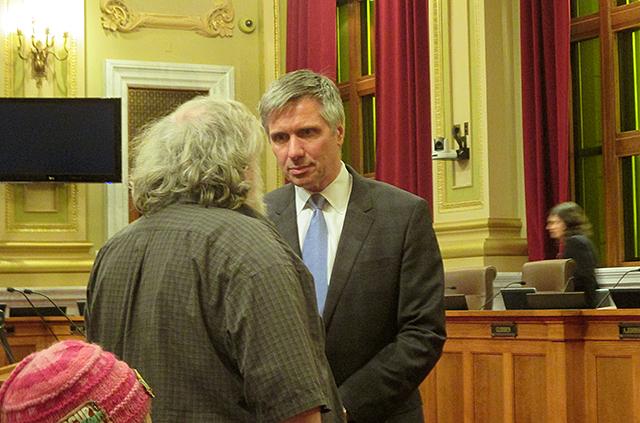 The timing, too, was unexpected. A more logical time for an update might have been in mid-November, when the academics leading the program had returned to Minneapolis for another round of talks and meetings. No council briefing was scheduled then, and the professors left town just days before Clark’s shooting.

But this week is the last chance this year for the council to talk about the issues arising from the shooting and the protests that followed. And it became an opportunity to respond to complaints that the council had not made itself available to hear from residents.

Hodges, taking her seat on the council dais, stressed that while the meeting was being held after the protests, the city’s involvement in the initiative began in January when it was one of 100 cities to apply to take part in the program.

“I think it’s important to note in light of recent events that this is something that we as a city have been involved with since March,” Hodges said. But it has been a struggle, she said, “to get the word out” on the national initiative.

“It’s not flashy. It’s not one thing all at once. It’s not where there is some magic way we can snap our fingers and have the kind of systemic change we wish would occur,” she said. Instead, it will take what she called long-term and difficult work. Hodges said Minneapolis was selected because it had already been addressing issues of trust and cultural change within the Minneapolis Police Department, citing the city’s efforts to outfit all officers with body cameras and its implementation of an early intervention program to identify officers with troubling tendencies.

Public testimony was both supportive of the overall project — and skeptical that it would make a difference.

Claudio Rivera, who lives in North Minneapolis, said he doubted police officers could identify and learn not to be governed by their implicit biases, one pillar of the initiative, after only one day of training. 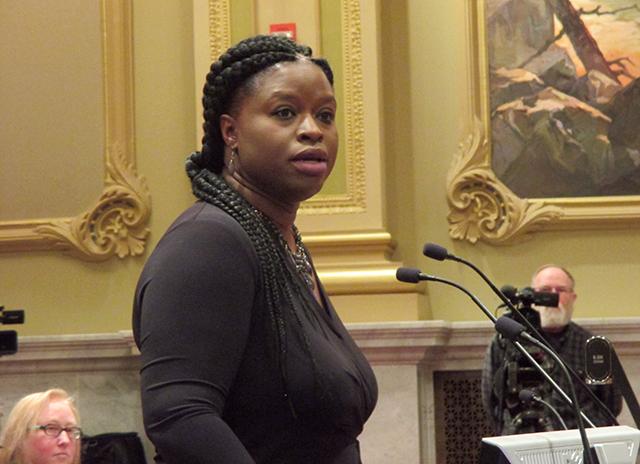 MinnPost photo by Peter Callaghan
Nekima Levy-Pounds: “If we are serious about regaining community trust so that this initiative can be successful, there are steps that need to be taken now to rein in the police department.”

Mike Spangenberg said he saw good things in the initiative, but said it will come down to “the extent to which white people are willing to hold other white people accountable for our role in perpetuating systems of white supremacy.” He also said it was unacceptable for officers who have racially hostile views to stay on the police force. “If you hold that level of racial animus toward the people you serve, you have no business being anywhere near a community of color with a badge and a gun. None.”

Nekima Levy-Pounds, a University of St. Thomas law professor and the president of the Minneapolis NAACP, said she supports the national initiative and pledged the organization’s support to help it be successful and effective. But she said she continues to hear reports of residents being abused and mistreated by police. “If we are serious about regaining community trust so that this initiative can be successful, there are steps that need to be taken now to rein in the police department and to send the message that this body will no longer tolerate abuse at the hands of the Minneapolis Police Department.”

The intent of the NIBCTJ is to gather data on what works and what doesn’t, as well as train departments in how to recognize implicit biases and to improve what’s known as procedural justice.

The program was begun well before Clark’s death, but did come in response to controversial police shootings in other cities, especially the death of Michael Brown in Ferguson, Missouri. The project grew out of President Obama’s My Brother’s Keeper campaign.

“There has never been a more formative time where our country has looked at this issue of police and community trust,” Mark Kappelhoff, a deputy U.S. assistant attorney general, told the council in June.

The initiative is based on what organizers call three pillars: implicit racial bias, procedural justice and reconciliation. It is led not by cops or politicians but by academics from UCLA, Yale Law School and the John Jay College of Criminal Justice (as well as several institutes, ranging from UCLA’s Center for Policing Equity to the National Network for Safe Communities).

To measure attitudes and biases, the NIBCTJ team will conduct surveys of both police department members and the public. It plans to follow up with a subset of officers to match up their responses with their service records — to see if there are any connections between attitudes and actions that could predict certain bad behaviors.

It also will run officers through training in procedural justice, which is based on the theory that gains can be made in community support of law enforcement if there is a perception that people are treated fairly and respectfully. Officers will also go through training to help them identify and compensate for implicit biases against people of color and other groups. 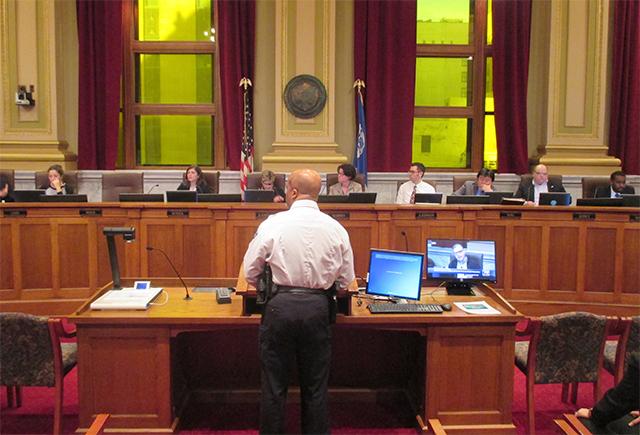 Another aspect of the process is something called racial reconciliation. That would involve police and political leaders listening to historic complaints about how police have treated less powerful groups and apologize for them.

Finally, the initiative hopes to learn what works and what doesn’t in the six cities and share those results with other police department.

“We can be a model — the city of Minneapolis and the Minneapolis Police Department — in terms of showing other cities how to have best practices in a wide range of areas,” said MPD Deputy Chief Medaria Arradondo.