In both cases, the proposed amendments led to hours of acrimonious testimony and marathon meetings over a relatively small slice of the city’s $1.24 billion budget. And in both cases, the proposals exposed rifts usually hidden by a scrim of party identity: the fact that all but one of the council’s members identify with the DFL. (The one who doesn’t — Green Party member Cam Gordon — is more liberal than most of the Democrats.)

The big difference between 2015 and 2014 was the position of Mayor Betsy Hodges. A year ago, those who rallied at the council’s final budget meeting supported Hodges’ efforts to fend off a proposal to fund a property tax reduction. At risk then was some money for several of Hodges’ priorities: the Clean Energy Partnership; a program to promote leadership skills among people of color; a racial equity study; and home-ownership counseling.

In 2014, Hodges and her allies managed to reinstitute some of the spending, and she ended up supporting the final budget. The compromise budget passed 12-1, though not before a litany of tears, accusations and threats promising to exact political revenge on those who had prevailed.

This year, however, Hodges was the target of the protests, which were triggered by a proposed amendment that was announced in a brief and vague press release issued just a few hours before the final budget meeting. One of the amendments, supported by Hodges and Public Works and Civil Rights Committee chairman Blong Yang, would have boosted police training under a federal initiative to improve police-community relations. But there was also another proposal: to spend $605,000 on “safety and accessibility improvements at the 4th precinct to better serve officers and the community.”

There were no other details, which allowed the void to be filled with speculation about what the money would pay for at the precinct, where members of Black Lives Matter and other protesters staged an 18-day occupation following the shooting of Jamar Clark by a Minneapolis police officer last month.

Nekima Levy-Pounds, the president of the Minneapolis NAACP, called supporters via Twitter to show up to oppose the measure, adding the hashtag #BlongNBetsysFortress.

‘Kiss your baby and slit your throat’

Council chambers were filled to overflow capacity. More than 60 people testified, nearly all opposing the money for the 4th precinct. But it was also an opportunity to lay out the frustration, anxiety and anger over the shooting of Clark and the city’s response to the protests that erupted in the wake of the 24-year-old’s death.

“For a long time it was said that Minneapolis was one bullet away from being Ferguson,” said Rod Adams. “That day is passed, that bullet has been shot.” Given the economic, educational and health inequities between whites and blacks in the city, Adams said, he could not fathom putting $605,000 to fortify a building that he said doesn’t need to be fortified. “The police have no reason to fear the community,” Adams said. “We have a reason to fear the police.”

When Jeremiah Ellison was called to testify, he walked to the front of the podium between it and the council where he turned and spoke to those in the audience. “I know a lot of people on the council,” said Ellison, the son of U.S. Rep. Keith Ellison. “I’ve met a lot of people on the council; But the one thing I’ve learned is that as nice as a nice handshake is, someone will shake your hand, kiss your baby and slit your throat at the same time.”

Levy-Pounds said the city’s political leadership shouldn’t have been surprised by the reaction to Clark’s death, since she and many others had warned about the effects of inequities and police abuse. “The only reason that this city didn’t burn to the ground was because of that occupation,” she said. “We served as a container for the raw emotions of the people of the city who are sick and tired of being sick and tired.” 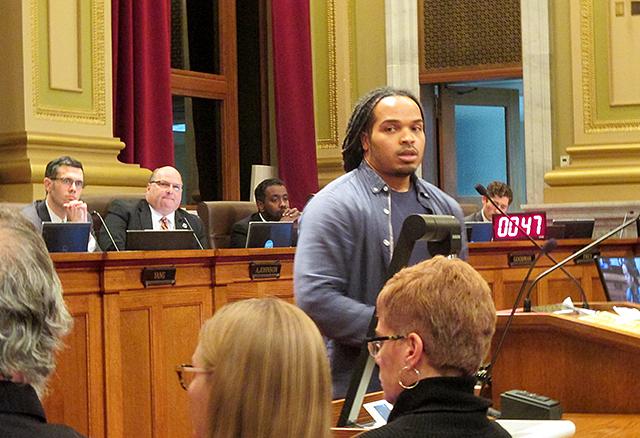 MinnPost photo by Peter Callaghan
Jeremiah Ellison testifying: “I’ve met a lot of people on the council; But the one thing I’ve learned is that as nice as a nice handshake is, someone will shake your hand, kiss your baby and slit your throat at the same time.”

Several of those who testified pledged to work to defeat current council members and the mayor. One asked Hodges when she was going to resign. Levy-Pounds pointedly noted that she lived in Yang’s 5th Ward. Others spoke of feeling betrayed by Hodges and others.

Nicque Mabrey said she was an active member of the DFL who is well known to the members of the council. “Betsy, you sat on my couch and you promised me a vision of equity. One Minneapolis,” Mabrey said. “Billy clubs in our ribs and violence in our streets. You lied. You lied. This is not the One Minneapolis we were promised.”

On it went. Passionate and profane. A few of the threats veered from the political to the physical. As is their protocol, council members listened without responding. That led to further accusations that they were uninterested or unmoved. And the anger was aimed not just at Hodges and Yang but at all of the elected officials on the dais, even those who were unlikely to support the money for the precinct.

There was another difference between this year’s political drama and that which occurred in 2014. Last year, the budget amendments that drew protests were actually offered up for consideration. On Wednesday, after the council returned to the chambers from a recess and began considering amendments, the $605,000 for the 4th precinct was off the table.

No explanation was given. It was as though it had never existed. And only when Council President Barbara Johnson said there were no further amendments to be considered did those who came to protest realize they had won. Afterward, neither Yang nor Hodges would comment. Johnson said Hodges and leadership decided to hold off on the amendment, and told MPR the measure would be revisited next year.

Only later would it be revealed what the money would have paid for: Repairs at the Plymouth Avenue station were to include new windows, new cameras and  graffiti-proof coating on the exterior stucco, according to Johnson.

Gordon said council members were told a security door was damaged and the windows needed to be replaced with bullet-proof glass. But he said he only learned of the proposed amendment a few minutes before the press release was sent out.

Without the precinct money in the budget, the council managed to find something else to fight about. Yang and Council Member Abdi Warsame sought $50,000 to help start a mechanic training program at Roosevelt High School, which would train low-income youth to repair fire department equipment and has already received a grant from the state to pay for the equipment. A small part of the money, $8,000, would go to the Midtown Safety Center in Council Member Alondra Cano’s Ward 9. The money would have come out of funds dedicated to the Green Zones program, which helps small businesses adapt to the green economy, but which also hasn’t gotten up and running yet.

But Cano opposed the change, partly because she didn’t like money coming out of funds targeted for the Green Zones program, which she had worked to adopt. But her reasons also were personal. She was unhappy that she had not gotten advance notice from the sponsors, even though it impacted her ward.

After noting that Green Zones would help small business, including minority owned businesses in Yang’s and Warsame’s wards, Cano said: “So, I’m looking forward to the day that the misogyny on the council can end.”

That drew applause and shouts from those watching the proceedings. And when Yang and Warsame’s proposal — an amendment meant to employ young, low-income minority residents — was adopted on an 8-5 vote, with four members joining Cano because they said it came at the last minute, the result was jeered. Who was for it and who was against it was more telling than what the amendment was meant to accomplish.

Once the budget was adopted 13-0, Hodges spoke of her budget’s many advances for equity programs. And then it was over. As residents filed out to the chants of “Black Lives Matter,” one woman added another, “Cano for Mayor. Cano for Mayor.”

Cano had won the room, if not her colleagues on the council.

One Minneapolis? You wouldn’t know it from last week’s budget hearing