Minnesota’s budget surplus has swelled to nearly $1.9 billion, setting off the debate in St. Paul about what to do with the extra money next session.

In an early release Thursday, state budget officials said the forecast improved from previous estimates “despite a weaker economic outlook.” The surplus has grown by $1 billion since lawmakers adjourned last spring, leaving $865 million on the bottom line. Law requires nearly $600 million of the surplus to go automatically into the state’s budget reserves, leaving about $1.2 billion of the surplus available to legislators next session.

In spending the extra cash, many lawmakers want to pick up where they left off earlier this year, when Republicans in control of the House and Democrats in control of the Senate clashed over spending the surplus on tax cuts or approving new funding for transportation. Gov. Mark Dayton has said he will renew his push for universal preschool in Minnesota.

Senate Republican Minority Leader David Hann was the first to respond to the budget forecast, calling for lawmakers to “immediately” approve a GOP-backed spending package for roads and bridges put forward last session and “give the rest of the surplus back to taxpayers.” This week, advocates for long-term caregivers and those who care for people suffering with mental and physical disabilities asked lawmakers for $90 million to boost worker pay. 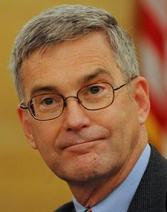 State economists, budget officials and lawmakers will address the projected surplus Thursday afternoon. Check back at MinnPost for updates.