In its final meeting of the year, all the St. Paul Council did was pass its 2016 operating budget and adopt sweeping changes to how the city regulates liquor service in restaurants.

Oh, and it also condemned Republican Presidential candidate Donald Trump for his “anti-Muslim, anti-refugee and anti-immigrant speech,” though it stopped short of banning him from the city. It also paid tribute to two council members who were serving at their final meeting.

And it managed it all in less than 90 minutes.

Mostly it was done via unanimous votes, though such unanimity wasn’t just desired for the change to the city charter that governs liquor provisions — it was mandatory. The charter change, which sought to lift caps on the number of restaurants with full liquor service, hasn’t been controversial. The only dissent came from some residents who objected to the accelerated process for the change, which moved the amendment through the charter review commission faster than normal. The faster pace was sought so it could be adopted by the council before the end of the year, before two newly elected members are sworn in to replace Dave Thune and Bill Finney.

But to be adopted by the council — rather than a vote of the public — charter changes must be unanimous, and approved by the mayor. The soonest a public vote could have been held is next November. Coleman has already expressed his support.

Last week, Council Member Dan Bostrom, of the city’s 6th Ward, expressed reservations about the charter change to the Pioneer Press, telling the paper that lifting the license cap to allow more cocktail service in wards 2, 3 and 4 could hurt his ward. But on Wednesday, Bostrom said that his concerns had been resolved and voted yes. The law would take effect 90 days after Mayor Chris Coleman signs the bill.

The caps are a vestige of earlier era. There is no cap on the number of restaurants with full bars in downtown St. Paul or in a handful of other commercial development districts. But outside those areas, different wards having different limits. In parts of Ward 2 that are outside the downtown zone, the cap is 41 licenses. In Ward 3, which includes Highland Park and Macalester Groveland, the cap is just seven. And in Ward 4, which covers the northwest part of the city, the cap is set at 16.

In wards that have reached the caps, restaurant owners have opted for licenses that allow service of beer and wine only. Of the 91 such licenses in St. Paul, 67 are in capped wards. Many of those restaurant owners support the change so they can offer cocktails to customers. The lead council member on the change, Chris Tolbert, of Ward 3, said the combination of the charter change and a revised city alcohol ordinance passed earlier this month would balance the desire of patrons for drink options and the desire of neighbors for controls on alcohol-induced rowdiness. That is why restaurants that seek liquor-by-the-drink licenses under the new system must close by midnight.

There are other controls in the new regulations — the licensed establishment must be primarily restaurants and not bars or nightclubs — and they also get rid of the so-called 60-40 rule. The old rule forced restaurants to capture 60 percent of their sales in food, which restaurant owners often complained about: Given the high prices for craft beer and better wine, hitting the 60 percent threshold became a tough task. Under the new rules, a restaurant must gain “a substantial amount of its income” from food and non-alcoholic beverages.

The council also adopted the city’s 2016 budget, mostly as Coleman presented it in August, but with some agreed-upon changes. The general fund portion of the budget is nearly $260 million and includes a property tax levy increase of 1.9 percent. The total budget is $548 million.

Among the additions are $150,000 in public money for the previously privately funded youth ambassador program, which employs trained workers to engage with young men in the city’s parks during the summer months. The city thinks that the program has reduced juvenile arrests during those months.

The budget also sets aside $330,000 to begin to craft a unified garbage collection system. Currently, St. Paul residents contract with private haulers, which means that a given alley can have many different trucks serving various residents. Council President Russ Stark said the plan is to follow programs in Bloomington and parts of Minneapolis, where a consortium of private haulers contract to provide service, but with just one hauler serving any one neighborhood.

The budget also maintains last year’s number of 615 sworn police officers — a historic level for St. Paul — and includes $25 million in street repair and reconstruction. The city will also maintain expanded library hours, a point of disagreement between the mayor and the council last year.

Not liked in St. Paul

Donald Trump isn’t liked in St. Paul (at least by the city council), but he isn’t banned either. That was a change made to a previously announced resolution that condemned his views on immigration, refugees and Muslims — and declared him officially unwelcome in the city.

Council Member Dai Thao said he changed the resolution to “condemn” Trump after it was criticised. In the revised form, it passed 6-1 with Bostrom voting no, not because agreed with Trump, but because he believed in free speech. 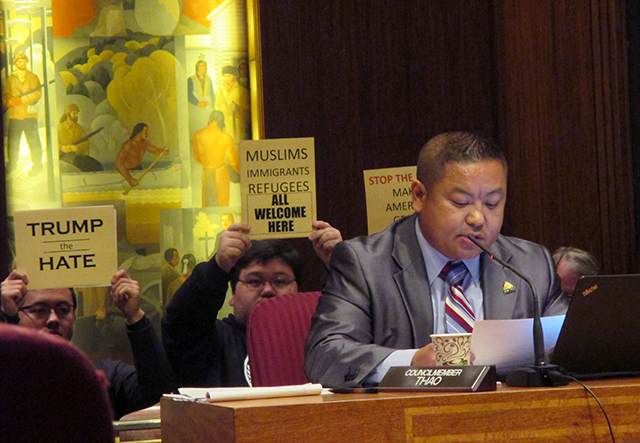 Thao, a Hmong American and refugee himself from Laos, said he experienced racism when he arrived in the country and received racist condemnations and threats after media reports about the proposed resolution.

“I understand free speech is an incredible tool Americans can use to shape our destiny but hate speech that incites harm, fear and structural racism and division disguised as free speech is hurtful and cuts into the core fabric of our nation built by natives, slaves, immigrants and refugees.”