The group of residents charged with making recommendations about paid leave policies in Minneapolis is just about finished listening and has started talking — and disagreeing.

On Monday, with all but four of the 14 public meetings dubbed “listening sessions” completed, members of the Workplace Partnership Group began to talk about what they might ultimately recommend to the City Council. The meeting at city hall was the first indication of the conflicts among the appointed members, who represent both employee and employer groups, unions and management, large businesses and small.

While the chair of the task force was careful to steer clear of anything that looked like decision-making until the final listening sessions are completed Thursday, some members expressed concern that a key decision had already been made. That is, the “policy decision outline” presented to members seems to presume that the group will recommend that the council adopt an ordinance with some form of mandatory paid leave. Though the outline laid out policy choices for what an ordinance would look like, it did not include a “no recommendation” option.

“At some point we should say, ‘It’s an ordinance, it’s a mandate that will have ramifications,’ or, ‘It’s incentives or best practices,’ ” said Bruce Nustad, a work group alternate member who works for the Minnesota Retailers Association.

The conversation became a bit contentious when Steve Cramer, a member representing the Minneapolis Downtown Council, said if the group has already decided to recommend mandatory paid leave, he didn’t have reason to keep attending the meetings.

“Personally I have an incentive to stay here at the table to try to work through these various issues in order to set what would be a reasonable standard for Minneapolis,” said Cramer, the Downtown Council’s president and CEO. “And we can disagree as to whether it should be mandated or promulgated in some different way. But if right off the bat this is going to be an ordinance, period, ‘We’re going to mandate this despite what we heard from so many employers,’ I don’t have much of an incentive to stay here.”

But Danny Schwartzman, the owner of Common Roots Cafe and work group member representing small employers, questioned the alternatives to a mandatory plan, such as policies that would encourage employers to offer paid leave but not mandate it. “Steve, if you’re planning on suggesting that this be an incentive based system or voluntary or something else,” Schwartzman said to Cramer, “wouldn’t it be helpful, if you’re threatening … ”

“I’m not threatening anything,” Cramer interrupted.

“You were saying that if we decided this wasn’t voluntary, that you might think that you shouldn’t be here. I think it would be helpful to have a concrete suggestion as to what an incentive system would look like. I haven’t heard that yet,” Schwartzman said.

While some business people suggested an incentive system that could award businesses with paid leave policies with a certification for display, Schwartzman said he also heard from businesses who fear that would lead to them competing with businesses that don’t offer benefits. 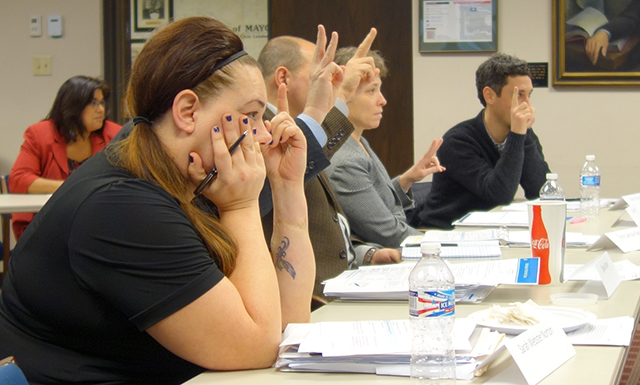 MinnPost photo by Peter Callaghan
Left to right: Sarah Webster Norton, Steve Cramer (partially obscured), Tony Lacroix-Dalluhn, Susie Brown and Danny Schwartzman expressing their opinions on some of the decisions points by holding up between one and six fingers.

Work group Chair Liz Doyle acknowledged that the decision-making outline does presume that the group will recommend an ordinance. “But if there’s interest in having one of those votes be ‘this is either an ordinance or a voluntary system’ instead, we could put that on the list of items to be voted on.”

Luke Weisberg, the facilitator for the work group, said it will ultimately be up to the council.

“They make laws,” he said. “So our assumption is that we’re going to give them recommendations that they’re going to turn into an ordinance. But there’s a range of ways to structure that ordinance so that certain things are required or maybe something softer than a requirement — an expectation with an incentive. Either way, there’s an assumption that council is looking for us to say, ‘You ought to do something and that something ought to include these things.’”

Asked Sarah Webster Norton, an alternate member representing employees: “So we can’t have the recommendation to do nothing. Or is that one of our choices?”

The task force did signal one key decision: If an ordinance is recommended it will cover not just those who work for employers based in Minneapolis but instead will cover all employees who work within the city limits, regardless of the location of the employer.

The group of 15 members and four alternates has at least four more meetings with a goal of having a recommendation to the City Council by Feb. 24.