One of the virtues of the designated location for a new Major League Soccer stadium in St. Paul could also be its biggest challenge.

That virtue — a location just north of I-94 near the intersection of Snelling and University Avenues — is easy access to transportation options, better yet its recent incarnation as a center of  “multi-modal transportation.”

Cars had long been kings on Snelling and University, at least until recently. In 2014, Metro Transit started service on the region’s second light rail route, the Green Line, on University. And in the spring of 2016, the Twin Cities’ first bus rapid transit service, the A-Line, will begin servicing Snelling. Meanwhile, pedestrian improvements were part of last summer’s rebuild of Snelling between Pierce Butler Route and Selby Avenue.

As such, it’s hard to find a mention of the so-called Bus Barn site as being ideal for a soccer stadium that fails to include those transportation investments, suggesting that soccer fans would have multiple choices to get to and from games starting in 2018.

There’s just one problem with those merits as it relates to the stadium: The piece of ground where all that transportation infrastructure comes together is already one of the region’s most congested and complicated intersections. Snelling carries 36,000 vehicles a day, while another 24,000 vehicles a day share University with the Green Line. Both arterials are fed in part by I-94, where 150,000 cars pass by each day.

Add in increases in daily volumes that might come from a 25-acre mixed-use redevelopment at the nearby RK Midway shopping center and 20,000 or so soccer fans arriving to and departing from 25-to-35 games a year, and an obvious question arises: Can the area handle it?

“The existing Snelling-University intersection is busy, unsafe and confusing,” concluded the Union Park District Council is its just-released Midway Center Community Visioning report. “Some neighbors report feeling unsafe and fear increased criminal activity while others are concerned with simply crossing the street.”

Said Eric Molho, co-chair of the community advisory committee examining the issues arising from the stadium plan: “Like much of our infrastructure, it wasn’t built for all of our modes to be successful and now we’re going to layer in some new challenges.”

There are high expectations for transit in the vision for the site laid out by both St. Paul Mayor Chris Coleman and Bill McGuire, the primary owner of what would be the stadium’s main tenant, Minnesota United. Both men predict significant transit use by gameday fans, and say existing parking could be supplemented by any parking added for the RK Midway redevelopment. But neither are talking much about significant new stand-alone parking ramps.

“One of the cities we compare ourselves to — sometimes with envy — is Portland,” McGuire said at the October pep rally/press conference where the team and the city announced their official betrothal. “Seventy percent of the people go (to Portland Timbers games) on public transit; there is no adjacent parking.”

Added Coleman: “I really believe that we can achieve 50 percent of those coming to this facility taking the Green Line, taking the A-Line, biking, walking.”

So how would the existing infrastructure handle 10,000 soccer fans sans cars? A three-car light rail train can carry 600 passengers at so-called crush load. The new 40-foot BRT vehicles on Snelling can carry about 80 sitting and standing though the A-Line platforms are big enough to accommodate larger, 60-foot buses.

Those numbers suggest that fans will have to wait as trains and buses fill and depart every 10 minutes. Unlike platforms near existing stadiums that were in place or in planning when the Blue Line and Green Line were designed, however, no one expected those types of loads at Snelling. And the two platforms on either side of Snelling are already among the most-popular on the Green Line, according to Metro Transit, with 2,000 to 2,500 daily boardings. 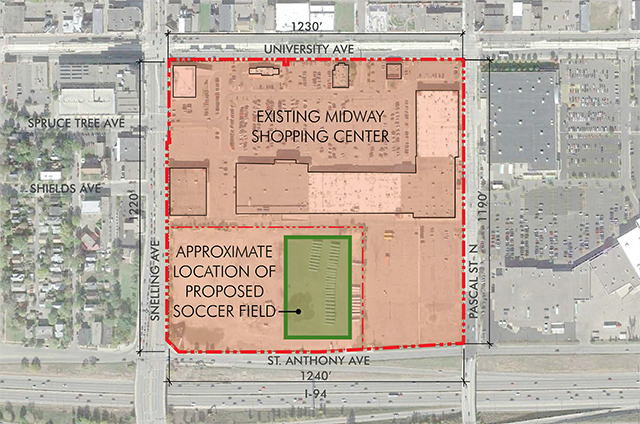 The number of soccer fans using the stadium could also increase over its lifespan. McGuire has said the stadium being designed by Populous will be engineered to accommodate future expansion, pointing to inaugural-season crowds of 32,847 in Orlando and Seattle’s league-leading average of 44,247. (The Orlando attendance numbers have already led team owners to bump capacity of its new stadium by 6,000 seats —  to 25,500 from 19,500.)

And then there’s the problem of getting to those platforms. In addition to the light rail tracks in the center of University, the intersection has through lanes, right turn lanes and left turn lanes — giving pedestrians plenty to watch for.

“The safety (and perceived lack of safety) at the Snelling/University intersection and the Snelling LRT station are a concern for numerous residents,” said the Union Park District Council report, which requested a safety plan be developed for the area. “This could include redesigned station platforms and connections between bus stops and transit stops that do not involve at-grade navigation of University Avenue.” The community group also suggested better sidewalks, better signage for pedestrians and bike riders, better lighting and changes to policing.

Brian Funk, director of rail transportation for Metro Transit, said the agency has already begun thinking about what it can do to live up to the expectations for transit use to the stadium. Relying on lessons learned from serving fans at TCF Stadium and Target Field, Funk said he thinks there are ways to accommodate game-day crowds with existing infrastructure.

For example, the agency knows that fans must cross at least one busy arterial, University (and perhaps another, Snelling) to get to the Green Line. But it would not make pedestrians rely only on lights and walk signs. As with the other stadiums, local police and Metro Transit police likely would be on hand to direct drivers and pedestrians. Agency staff would be available to help fans find their trains.

“We need to maintain road access so we have to do it in a controlled atmosphere rather than let the traffic lights control the operation,” Funk said. “We’re doing it in a very orchestrated, very deliberate process.”

As with the other stadiums, the agency would probably develop protocols to make sure only a train load of passengers would be allowed onto the platforms with others held back until there is room. At Snelling, for example, Funk said large pedestrian walkways lead to the platform from Frey Street to the West and Simpson Street to the east. They are separated from the tracks with fencing and could be used to hold riders waiting to get on the platform.

Metro Transit also has the capacity to run extra trains for special events. Those do not stop at intervening stations and arrive at the platform empty, ready to load up with fans.

“We’re trying to use the experience we have,” Funk said. “We think we’re able to serve these large events effectively. If you’re not the first one out of the stadium you might not be on that first train but we try to provide as much service as we can and do it safely.”

The problem for pedestrians

Bill Goff, a project manager for the Minnesota Department of Transportation, said Snelling is better for pedestrians than it was just a few years ago. A 2013 study of multi-modal needs on Snelling resulted in recent sidewalk, lighting and beautification improvements that made the street more welcoming to those on foot.

The study, Goff said, was a reaction to an earlier analysis that focused mostly on motor vehicles. “Snelling was a concrete river, it was a concrete divide,” is how he summarized the viewpoint of neighbors. The purpose of the study was to answer the question: “How do we get across Snelling?” 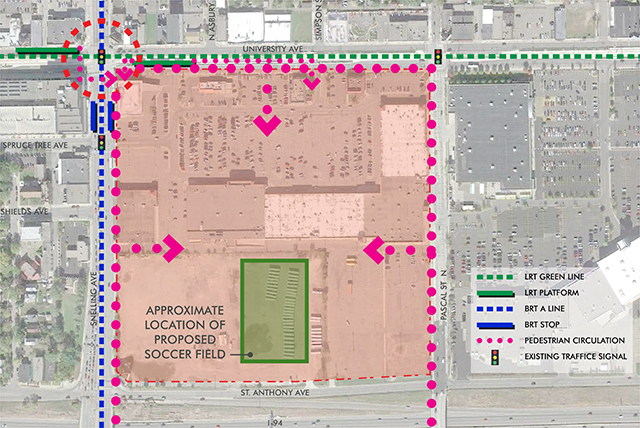 S9
Potential transit patterns in and around the proposed stadium site.

But that study didn’t consider a sports stadium because it wasn’t on the table at the time. It did, however, have in mind the impacts of a new use for the shopping center. Goff said MnDOT will wait until the city’s transportation consultant, SRF Consulting, completes its study of potential impacts of a stadium and repurposing of RK Midway before looking into further improvements on Snelling.

Coleman thinks bikes will play a role in the transportation story of the project. But one bicycling advocate thinks the solution might be to avoid Snelling and University. Mike Sonn, co-chair of the St. Paul Bicycle Coalition, said he thinks bike access to the site might be better placed on Pascal Street, the arterial to the west of RK Midway. It has its own bridge over I-94 and could be used to make safe connections to primary east-west bikeways on Marshall Avenue south of the freeway and Charles Avenue north of University.

“My perspective is to use a backdoor approach using Pascal rather than try to shoehorn a bike lane onto Snelling,” Sonn said. While that could serve the stadium and the shopping center repurposing, it would also provide a badly needed north-south bikeway in that part of St. Paul, Sonn said.

St. Paul city staff has no illusions that a new stadium and a major redevelopment of an antiquated auto-oriented shopping center can be plopped down at Snelling and University without improvements to the infrastructure.

“The redevelopment of the Snelling Midway site could potentially necessitate changes to existing infrastructure and also the creation of new infrastructure,” stated minutes from the December 17 meeting of the community advisory committee. One change could entail continuing through the site the street grid that exists around it. For example, Spruce Tree Drive could be an east-west street between Snelling and Pascal, staff has suggested.

The community advisory committee will continue to meet through March. A public open house will be held Tuesday, January 26 beginning at 7 p.m. at Concordia University’s Buenger Education Center.