By now, Adam Duininck’s presentation is etched mostly to memory, but he uses a few slides as a visual aid. The slides show existing and proposed train lines — orange, blue, green, red — shooting out from downtown Minneapolis and St. Paul like veins carving through the metro, connecting places like the Twins ballpark to the state Capitol, and the University of Minnesota to the corporate headquarters of Target.

“Why do people take trains?” Duininck, chair of the Metropolitan Council, said at his 20th presentation to a group in four months. This crowd included nearly 40 members of the Regional Council of Mayors. “It’s not just to move people around because it’s some kind of a social experiment. We want to accommodate future growth, we want to connect people to jobs, which means into the city and out into the suburban areas.”

Duininck is meeting with labor unions, chambers of commerce, planning commissions, legislators — basically, anyone who will listen — to make the pitch that the state should invest more in transit in the upcoming legislative session.

It’s not an unusual position coming from the council, the strategic planning agency for the seven-county metro area, but 2016 is a critical year for its priorities. The council needs to secure $135 million for the local portion of the controversial Southwest Light Rail Transit line, Duininck says, or risk losing out on $887 million in federal funds backing the project.

The project aims to connect downtown Minneapolis to the rapidly growing southwestern communities and businesses in St. Louis Park, Hopkins, Minnetonka, and Eden Prairie, known as the Southwest Corridor. But it’s already a tough sell to Republicans in control of the state House, who told voters on the 2014 campaign trail that Democrats put money toward trains in the metro at the expense of roads and bridges across the state. The project has been a headache for Democrats, too, with escalating construction costs, legal battles and disagreements between the very communities the line aims to serve.

Man in the middle

At the center of the transit debate is Duininck, the first-ever full-time chairman of the council, appointed by DFL Gov. Mark Dayton last January. After just three months on the job, Duininck was confronted with some bad news: the cost of the Southwest LRT project had climbed about $341 million to nearly $2 billion.

The budget bombshell dropped right in the middle of the 2015 legislative session, where legislators were debating whether to raise the state’s gas tax, as well as sales taxes in the metro area, to pay for billions of dollars in road, bridge and transit projects over the next decade. The news gave fuel to critics of Southwest LRT, and even Dayton and Duininck questioned the long-term viability of the project. 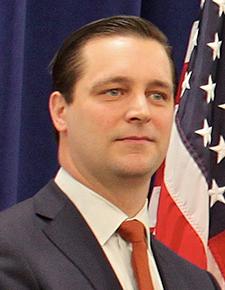 Talks stalled on an overall transportation package during session, but in the meantime, Duininck went to work to cut down the total cost of Southwest LRT. After weeks of meetings and discussions with various stakeholders along the proposed line, the Metropolitan Council voted to cut two of the 17 planned stations along the line, some of the station furnishings and landscaping and the total number of train cars, among other things. That brought cost back down to $1.7 billion, a position that Duininck thinks situates the project nicely in the upcoming session.

“Not just Southwest, but all the corridors had technical issues to overcome,” said Duininck, 35. “I’m cautiously optimistic. We’ve gotten to a position where we understand the need pretty well. Now it’s a question of if can we come together and compromise.”

Duininck and most Democrats want legislators to authorize local county commissions to raise sales taxes in the metro area by a half cent to fund the state’s portion of Southwest LRT, as well as future projects in the region. Proposed by Dayton and Senate Democrats last session, the sales tax increase would keep local governments from having to come back to the Legislature for money each time there’s a new project proposed. But there’s also a projected $1.2 billion budget surplus on the table next session, and it’s also a major bonding bill year, meaning legislators could fund the project through borrowing as well.

First, Duininck and Democrats have to convince House Republicans the project is a good idea. Talks of expanding train lines fell with the overall transportation package last year, but there were huge gulfs in the debate all session. A Republican transportation package dedicated $16 million to metro and rural transit per year over 10 years, while Dayton and Senate Democrats proposed closer to $3 billion over the next decade for transit development across the state.

Rep. Jim Nash, R-Waconia,  said he hasn’t noticed a major shift in Republican’s feelings on transit since last session ended. “I don’t think the sentiment has changed. I’d say if you ask the average Minnesotan what they are most concerned about, it’s roads and bridges, and the Republican caucus is going to support that,” Nash, who is vice-chair of a subcommittee on reforming the Metropolitan Council, said. “I can’t think of one of my Republican colleagues that’s interested in light rail and I just don’t envision that coming out of this session with a green vote from the House.”

That’s not exactly the message coming from Tim Kelly, the Republican chair of the House Transportation Committee. “[Transit is] clearly a piece of the puzzle that we just ran out of time with last session,” said Kelly, of Red Wing. “I’m fully aware of the importance of that transit piece in getting a complete transportation picture put together on the long-term side.”

But when it comes to the Southwest LRT project in particular, Kelly is more cautious about predicting its chances with the Republican-controlled House. “I think that one is yet to be determined,” he said. “I certainly have to test the waters with our own caucus to see.”

DFL Sen. Scott Dibble, chair of the the Senate Transportation Finance Committee, said Republicans are trying to use transit as leverage in the transportation debate to get more for roads and bridges, but his caucus won’t support a bill this year that doesn’t include some money for transit, including Southwest LRT.

“If we don’t do something substantial for transit in the metro area we don’t have a transportation bill at all. We won’t pass a bill that won’t serve the entire state,” Dibble, of Minneapolis, said. “In this debate, it’s time to stop pretending we can somehow leverage transit against whatever. The choice is we do something that serves everyone or we do nothing. Let’s just stop the silliness.”

Duininck, who has plenty more meetings lined up before session starts, is still hopeful. He was particularly encouraged that the federal government passed a comprehensive transportation bill late last year. That will make it easier for the state to rely on funds from the federal government for future projects.

And, he added: “If the federal government can do it, Minnesota can do it.”

Why the 2016 legislative session will be critical for Southwest LRT