That’s when crews began laying the wooden panels on the cage of posts and beams at the Minneapolis site of what will eventually be the seven-story office building known as T3 (Timber, Technology and Transit). When it’s finished sometime in this fall, the building will be the first modern tall wood building in the United States.

Not everything in T3 — which was designed by Vancouver’s Michael Green Architecture and Minneapolis’ DLR Group and is being developed by the Houston-based Hines — will be made of wood, of course. The elevator core as well as the parking level and foundation of the structure, which sits across the rail lines from the Designers Guild Building and behind Dock Street Landing in the city’s North Loop neighborhood, are concrete. But atop that deck are large glue-laminated timber posts and beams that will be covered by the NLT panels to form the flooring and ceilings of the office building.

Modern version of an old method

The construction method is actually a modern version of an old technique, said Lucas Epp, an engineer for StructureCraft, the Vancouver company that collaborated with the architects and MKA engineering in thedesign and built the timber panels, posts and beams that make up the building’s structure.

To create the NLT panels, two-by-eight wooden boards are stacked together on end and nailed together to form flat panels that can be up to 10-feet wide and 42-feet long. No glue is used in the process. Plywood is then attached “to give it shear capacity, a structural diaphragm,” Epp said.

“It’s a very old technology in a lot of ways,” Epp said. “We’ve taken it and kind of reinvented it.” Rather than nailing the boards together on site, the panels are prefabricated in a factory in Canada and trucked to the building site. They are then lifted by crane and placed on the glulam beams, where they are attached with quarter-inch and half-inch screws that can be as long as two feet. That’s the process that began Monday. 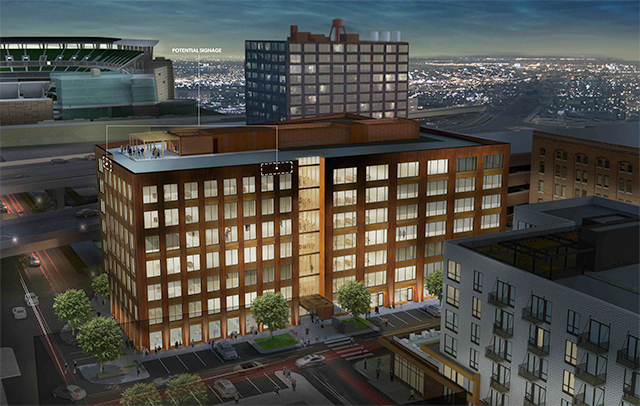 Michael Green Architecture
The site for T3 is surface parking behind the Dock Street Flats at 333 Washington Avenue N., a trapezoidal parcel that abuts the I-94 ramps from 3rd Street N. and the Cedar Lake Trail.

“It’s essentially like assembling a bunch of Lego blocks,” Epp said. “That’s one of the big things about building with timbers. You can erect significant components of a structure just one crane pick at a time. We’re planning to erect this structure in two and a half months. For a 220,000 square foot structure, that’s pretty fast.”

The panels do not need fire-proofing. During a fire, the timbers and panels would char and form a protective layer, according to StructureCraft, which allows the wood to remain exposed and visible inside and outside the finished building.

T3 will be the first mass timber construction building in the U.S., but such structures have been built in Canada and Europe for several years. A taller wooden building is being designed for the Pearl District of Portland, one of two structures — the other is in New York City — that will split a $3 million prize for winning the U.S. Tall Building competition, sponsored by the U.S. Department of Agriculture to encourage the construction method. 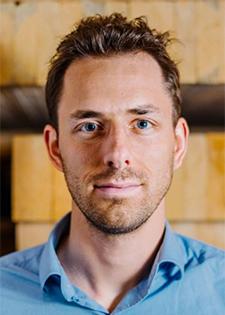 Epp said T3 likely would have won that prize had the timing been right for the Hines project, which will be the first mass timber building in the country to open. Of T3, Epp said it was a highly competitive bid environment. “All the big timber players in the world were bidding on it,” he said.

Robert Pfefferle, Hines’ director of development, said the construction process – led by Kraus Anderson – does present new challenges for the builders. While engineered wood panels are well understood, the size, height and configuration of the materials for T3 are unusual. And because so much of the material will be exposed, Pfefferle noted, it must be handled with particular care during assembly.

T3 architect Michael Green has become one of the leading advocates for mass timber construction. His firm designed one of the first such buildings in North America, the Wood Innovation and Design Center in Prince George, British Columbia, and his paper “The Case for Tall Wood Buildings” goes deep on the process and the benefits of the technique.

In a TED Talk on the topic, Green makes the case that wood is more sustainable than steel and concrete with a lower carbon footprint. He also asserts that using blow-down timber or trees killed by pests is a way of sequestering the carbon that might otherwise be released through decomposition. 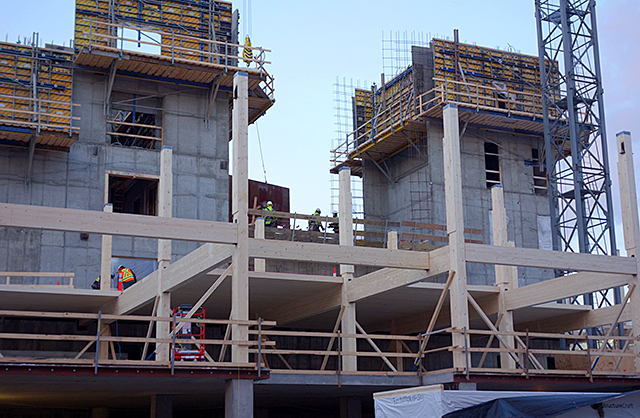 MinnPost photo by Peter Callaghan
On Monday, crews began laying the wooden panels on the cage of posts and beams at the Minneapolis site.

Epp said a substantial amount of the lumber used in the materials for T3 were from trees killed by the mountain pine beetle. That, he said, contributes to the sustainability of the project because the dead timber might otherwise not have been used. The beetle lives under the bark and leaves a bluish stain on the wood. That stain can be seen in some of the panels, Epp said.

Part of the allure of the technology is that much of the wood is left exposed to tenants and visitors. In his TED Talk, Green said, “I’ve never seen anyone walk into one of my buildings and hug a steel or concrete column. But I’ve actually seen that happen in wood buildings.”