The work group trying to write a paid sick leave ordinance for the Minneapolis City Council had spent nearly two hours discussing the policy Monday morning when they became distracted by something completely different.

What if, rather than haggle over the details, a program similar to workers compensation was created as a way to pay for private employers to offer sick leave in Minneapolis? (Workers compensation pays for health care and time loss for injured workers through a payroll tax and deduction.)

The idea, presented as one of four ways to overlay a mandatory sick leave law with employers’ existing sick leave policies, could be “administered by the city through a payroll tax into a fund that pays for sick days for all workers in Minneapolis.”

What could have been considered an academic exercise instead received serious consideration during the meeting, even after the group’s facilitator, Luke Weisberg, concluded that the option was “potentially aspirational, but probably not gonna be appropriate for this moment.”

“This was raised by some of the small employers — for the same reasons — in terms of, ‘How do we make this more universal across the city,’” said Liz Doyle. She is the chair of the work group as well as the associate director of TakeAction Minnesota, a statewide organization with membership from labor unions and progressive groups.

While Doyle said it was outside the sick leave models adopted in other cities, it was a way to “scoop up” some of the challenges facing a Minneapolis ordinance, such as how to deal with employees who move from one employer to the next; those who work limited hours; and contract employees.

“It feels like a direction this group isn’t likely to head, but it is something I know I would support further down the road,” Doyle said.

But others weren’t ready to wait. “I would go as far as to say that [the payroll tax idea] is actually what we would like to see happen,” said Molly Glasgow, a small-business owner representing the Twin Cities Metro Independent Business Association. “My first recommendation to the council would be [that option]. My second recommendation to the council would be everything else we’ve been talking about.”

Chelsie Glaubitz Gabiou, the president of the Minneapolis Regional Labor Federation, said the system might look like plans used in construction to cover benefits such as pensions and health insurance for workers who move from employer to employer, depending on the project. 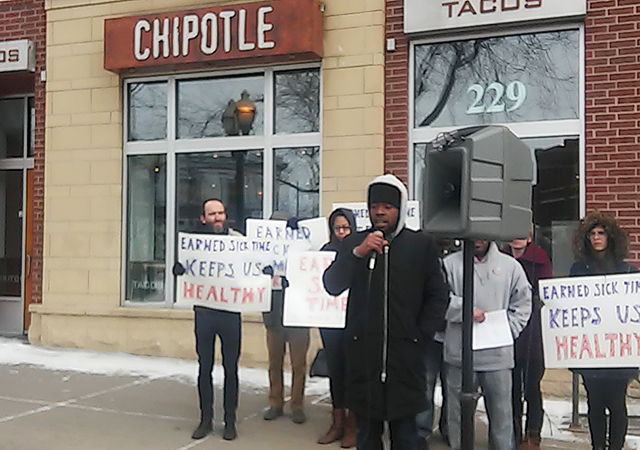 Steve Cramer, president of the Minneapolis Downtown Association, said it was okay to include in the report that the group considered the idea, but added that there are two “impassable barriers” to such a city-run system. The first is that it would require authorization from the state Legislature. The second is no models exist for administering such a system.

“I agree with Steve on this,” said Wade Luneberg, who works with local 17 of the UNITE HERE union. Luneberg said while such a plan could be a long-term goal, getting a sick leave ordinance passed in the short term is more important now.

Weisberg suggested the group’s report to council reflect the conversation: “It’s a bigger solution than we anticipate the council was looking for now,” he said. “We can note that it’s one of 18 other brilliant, big ideas we came up with that nobody’s going to do right now.”

But Ron Harris, an organizer for Neighborhoods Organizing for Change, said he wanted the recommendation to be stronger, based on his sense of strong support among work group members. “I don’t think it’s something we just say ‘Oh yeah, it’s a good idea but we’re not going to pursue it,’” he said. “There was a lot of head-nodding going on.”

“There was a lot of head shakes too,” said Sarah Webster Norton, a waitress appointed as an alternate representing employees who described herself as speaking for the restaurant industry. “I’m not on board.”

The group did not take a vote on how the idea of the payroll tax/city run sick leave program would be presented to the council, if at all. It has at least two more meetings to finish discussing details of an ordinance, with its report due to council by Feb. 24.