In early February, when lawyers from Maslon LLP announced that were filing a lawsuit in Ramsey County Court on behalf of the ACLU of Minnesota and NAACP Minneapolis in order to force the state of Minnesota to release video related to the shooting death of Jamar Clark, the move was met with a fair amount of skepticism.

Why not wait until the investigation of the shooting of the 24-year-old Clark by a Minneapolis police officer is complete, the leaders of the two groups were asked. Couldn’t the release of videos potentially taint eye-witness testimony? Might it subject the city to civil suits? Isn’t the footage exempt from disclosure under Minnesota’s Data Practices Act (DPA)? Why not trust the system?

To those questions, ACLU Executive Director Charles Samuelson responds: “We are trusting the system.”

In fact, the two organizations are using a novel provision of a state law that is particularly relevant to the facts in the Clark case, Samuelson said, to argue that the video footage should be made public — an effort that may not be as farfetched as it initially appeared.

The DPA declares that data about the police’s ability to “cite, arrest, incarcerate or otherwise substantially deprive an adult individual of liberty shall be public at all times.”

And while the same law does provide a temporary shield for investigative data “collected or created by a law enforcement agency in order to prepare a case against a person,” that exemption has its limits.

First, as the suit points out, the DPA makes such data nonpublic “only while that investigation is active.” Moreover, even when an active investigation is under way, the law creates an opening for challenging the failure to release information, a process that allows a judge to “consider whether the benefit to the person bringing the action or to the public outweighs any harm to the public, to the agency or to any person identified in the data.”

That’s the provision under which the NAACP and the ACLU are looking to have the Clark videos made public.

“This is not a law that we and the NAACP created,” Samuelson said earlier this month. “This law is 50 years old. You guys use it all the time — the press does — to get information from government. And the community is also entitled to get that information. This is public information.”

The meaning of an ‘active’ investigation

The day after the lawsuit was filed, the state Bureau of Criminal Apprehension, which took over the Clark investigation from the Minneapolis Police Department, announced that it had completed its investigation. Its report was delivered to Hennepin County prosecutors on Feb. 10. But there is no word yet as to when the video recordings that might have captured the shooting will be released.

The DPA defines an investigation as active up until one of several possible things happen: either a decision is made not to file charges; the data is presented as evidence in court; or — if the data was not used as evidence — all court appeals have been exhausted.

Which means there is plenty of time that the videos could continue to be considered nonpublic by the BCA, barring a court ruling to the contrary.

No precedent in Minnesota

Haley Schaffer, a Maslon attorney working on the lawsuit, said there is no precedent for using the court review clause to win release of investigative data. But there are cases in other states where public-information laws were used to gain release of police-shooting video. While those cases can not be used to show precedence in Minnesota, they can be cited because they have similar aims: to overcome privacy or investigative exemptions if the public benefit outweighs those considerations.

The most-prominent case is from Illinois, where a freelance journalist filed a lawsuit under that state’s freedom of information law for all video related to the shooting death of Laquan McDonald in October of 2014. A court ordered the release of video from a police dashboard camera of the shooting last November. It was released just after the officer who fired 16 shots at McDonald was charged with murder. (For his trouble, the journalist, Brandon Smith, was blocked from attending a press conference where the mayor and police chief talked about the released videos.)

In separate actions, news organizations in Chicago — including the Chicago Tribune — used the open government law to win release of other videos, such as those from security cameras in and around nearby fast-food restaurants.

In a New Hampshire case, the state’s open government law was used by media organizations to gain partial release of videos showing the death of Hagen Esty-Lennon, who was shot by two police officers. In that case, the dead man’s family sought to prevent release on privacy grounds. A judge reviewed the video in chambers and decided that all but four minutes of the video and all of the audio should be released. The footage that was released showed the most graphic aspects of the shooting.

An evolving attitude about releasing data

The release of any video showing the Clark scene, which took place on Nov. 15 near a North Minneapolis Elks Lodge, has been one of the demands made by the NAACP, Black Lives Matter and many community members interested in the case. After Minneapolis officials were pushed to release the footage, those officials said they didn’t possess the recordings, since the investigation had been turned over to BCA. BCA brass, meanwhile, repeatedly cited the active investigation exemption under DPA as its justification not to release them.

In the lawsuit, the plaintiffs argue that if there was ever a set of circumstances that would trigger the court to conduct a balancing test, it’s the Clark case. “It is in the public’s interest to know what happened to Jamar Clark,” said NAACP President Nekima Levy-Pounds. “We should not have to wait over a year, as in the case of Laquan McDonald in Chicago, for us to find out what happened between the Minneapolis police department and Jamar Clark.”

As the lawsuit argues: “Secrecy and lack of transparency has served to deepen the chasm between police and the community by reinforcing the community’s fear that police will not be held accountable for their acts of misconduct.” 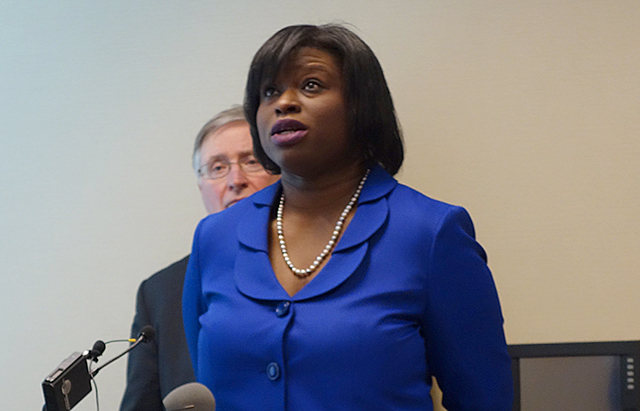 MinnPost photo by Peter Callaghan
NAACP President Nekima Levy-Pounds: “It is in the public’s interest to know what happened to Jamar Clark.”

After pointing out that there are several different, and conflicting, versions of the shooting — from eyewitnesses and the officers involved (via comments made by the president of the MPD police union) — the suit asserts that the release of the videos “may help the community to come to a collective understanding about what occurred the night Jamar Clark was killed.”

“Until the community is given some measure of transparency through the release of the videos, the relationship between the community and the police department cannot begin to be repaired,” notes the suit.

There has also been a change in the views of some police and politicians regarding when video evidence should be released. Chicago Mayor Rahm Emanuel endorsed a task force recommendation that video and audio recordings be released to the public within 60 days of an incident. And the Star Tribune recently quoted Minneapolis Police Chief Janeé Harteau supporting a more flexible policy. “People tend to create a narrative they want to create, and the sooner we can release the videos along with the facts, the better,” said Harteau, who wasn’t speaking specifically about the Clark case.

The plaintiffs have yet to get before a Ramsey County judge, though Schaffer hopes that happens soon. “We are available and willing to take this to the judge as soon as they are willing to hear us,” she said.