Thursday, during a meeting of the citizens advisory committee looking at issues related to the stadium  — including the redevelopment of an adjacent shopping center and the former Metro Transit bus barn — the lead owner of the expansion team unveiled plans for the site.

While they are still preliminary, the plans showed that the stadium itself is no longer confined to the bus barn property. Instead, it has moved to the center of the property, and now has a north-south orientation, which means that while part of the stadium would sit on the bus barn property — owned by the Met Council — another part would actually sit on what is now private property, a parcel currently home to the RK Midway shopping center.

Since the land and the stadium will ultimately be owned by the city of St. Paul under an agreement between the Federal Transit Administration, the Met Council, the city and the team, moving the stadium location adds another bit of complexity to an already complex deal.

City of St. Paul Finance Director Todd Hurley said the team will purchase the land from RK Midway owner Rick Birdoff on both the northern and eastern edges of the bus barn land and give it to the city.

The stadium itself will be built by team owners and given to the city. The city’s lease costs will be reimbursed. In exchange, the team wants the state Legislature to exempt the facility’s construction from sales taxes and the land from property taxes.

Under previous plans, the city was able to make the case that because the bus barn site hadn’t been on the tax rolls for decades, there would be no loss of existing revenue flows. Under the new plan, some land that’s now part of the shopping complex would be taken off the tax rolls after it is given to the city. The site plan also shows some commercial uses could potentially exist on bus barn property.

It’s unclear what the property tax implications of the changes would be. Would private business located on the bus barn property also be exempt from property taxes? Or would they be assessed an amount equal to what owners would pay on privately-owned land — in the same way that lessees of the St. Paul Port Authority land pay assessments in lieu of taxes? (UPDATE: City staff confirms that any private development on bus barn property would be taxed.)

Mayor Chris Coleman’s communications director Tonya Tennessen said the new arrangement, despite the potential loss of some property taxes from the RK Midway property, remains a good deal for the city. “We believe the overall economic benefit generated off of this redevelopment site will be a huge win for the neighborhood, city and region,” Tennessen said.

Team spokesman Eric Durkee said the stadium was reoriented from sitting east-west in the center of the bus barn property to the current location in order to fit within the reconstituted urban street grid. As presented, both Spruce Tree and Shields Avenue would be extended through the development on an east-west orientation; two new street extensions, designated as Snelling Place and Simpson Place in the site plan, would move through the site on a north-south orientation. The new location also provides a stronger connection between the green space and the stadium. 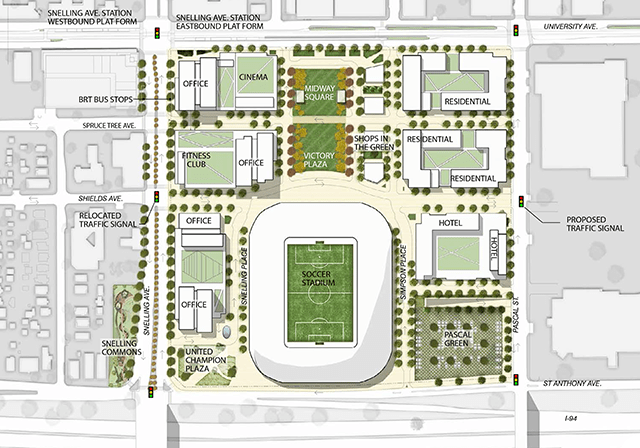 S9
While they are still preliminary, the plans showed that the stadium itself is no longer confined to the bus barn property.

The plan would require demolition of retail space in the shopping complex that now houses a Rainbow supermarket, since the stadium would extend north to what would be the extension of Shields Avenue. “I think there’s been a plan in place. Rainbow has to decide what they want to do,” said principal team owner Bill McGuire. “I think eventually Rainbow was thinking about not being there and maybe coming back in a new space.”

It was McGuire who presented the site design, which was crafted primarily by architects hired by Birdoff, S9 Architecture. Birdoff, who like McGuire is a member of the advisory committee, did not attend Thursday’s meeting.

“What you will see is sometime in the future,” McGuire said of the commercial development north and east of the stadium. “It is not next week.”

The plan would revamp the 60s era shopping center back into traditional street grids, matching the rights of way of the surrounding neighborhoods. He said the buildings will be mixed-use with retail on the ground level and residential, commercial or hotel uses above. Parking will be in the interior of building complexes, he said, and all will be connected with sidewalks 15 feet in width and bike lanes.

Of the 35 acres encompassing both the bus barn and RK Midway properties, the design proposes that 7.1 acres be open space and parks. While the streets will be wide — between 70 and 90 feet — “I don’t think any of these are meant to be a major thoroughfare,” McGuire said. After accounting for open space, streets and stadium, 11.4 acres would remain at the site for new private development. 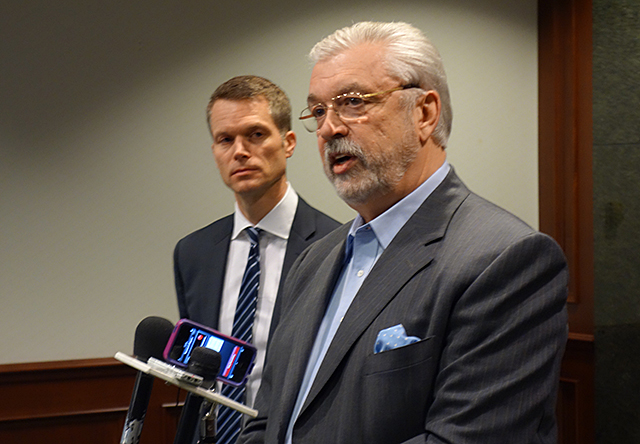 The stadium itself is being designed by Populous. McGuire said he expects to unveil renderings of that stadium by the end of February. Should the stadium construction begin sometime this summer, it would be ready for the opening of the 2018 MLS season, which begins in March. But the league may ask the team — now known as Minnesota United FC — to start league play a year earlier, which means it would need a temporary home. Both Target Field and TCF Stadium are being considered.

McGuire did say that while the redevelopment of RK Midway could happen over many years, he expects a few of the features shown in the site plans to be ready for the stadium’s 2018 debut. Those would be two parcels of open space between the stadium and University Avenue, some of the structures in the northeast corner of the shopping center property, and parcels to the east of the stadium, which could include some surface parking.

Jonathan Sage-Martinson, St. Paul’s director of planning and economic development, said the tri-party deal between the federal transit agency, the Met Council and the city should be ready within a few weeks. The land was originally purchased with money from the FTA for transit uses. The arrangement will allow it to continue to benefit transit because the lease payments will go to the transit agency.

Sage-Martinson said Thursday the city would not be asking for state government money for infrastructure improvements — such as the new streets, sidewalks and stormwater. Adding those will depend on the phasing of development over time. “Obviously the city is in the business regularly of investing in public infrastructure,” he said. “We’ll be reviewing and trying to understand what needs to go in and what that cost will be.”