Ohio Gov. John Kasich has claimed repeatedly that he “led the historic effort to balance the federal budget for the first time in a generation.”

But if history agrees with conventional analysis, it will show that Sabo, not Kasich, led the congressional drive to eliminate deficit spending in the 1990s. Indeed, Kasich actively fought the measures now credited with stopping the red ink.

“In Congress, Martin was reserved, but when he spoke the room went silent because everyone knew something worth hearing was about to be said,” Rep. Betty McCollum, D-Minnesota, said in a statement on Sunday.

Sabo’s chairmanship of the House Budget Committee in the 1990s, she continued, “set the country on a course that resulted in a federal budget surplus that was unfortunately squandered.”

Both Sabo and Kasich hit the pinnacles of their congressional careers during the ‘90s when they served as leaders for their respective parties on the House Budget Committee. Covering Congress at the time, I watched them come to stand as icons of the titan clash between Republicans and Democrats over taxing and spending.

Their personal styles were as far apart as their ideological bases. Reflecting his Norwegian roots in the Upper Midwest, Sabo was forceful but restrained, careful not to overstate and unfailingly courteous. In contrast, Kasich bubbled over with loquacious enthusiasm and bold claims for his party’s goal of slashing the size of the federal government, taxes and deficit spending all at the same time.

Both men also could fairly claim the title “deficit hawk.” Who wasn’t one of those creatures at the time of national alarm over a deficit that stood at $290 billion in 1991 and was projected to top $350 billion before the end of the decade? Texas industrialist Ross Perot had spurred the sense of urgency with his independent presidential bid in 1992. (Much of the alarm faded away during the 2000s when deficits soared once again, but that’s another article.)

Where is credit due?

Kasich is correct in saying that the budget did come into balance while he chaired the House Budget Committee in 1997 and actually returned a surplus in 1998.

The debate begins over the question of what led to that achievement.

Most economists look back to three factors that came into play years before 1997, said analysis by the New York Times:

The backdrop to those three factors was constant sparring between Democrats and Republicans, between Sabo and Kasich, over budget priorities.

After Sabo’s victorious drive to pass the 1993 budget, his Democratic party took a beating in the 1994 mid-term elections, losing its majority hold on the House. Thus, Kasich replaced Sabo as Budget Committee chairman and pushed hard for the pledges set out by then-Rep. Newt Gingrich and other House GOP leaders in a document called the Contract With America. It called for sweeping tax cuts along with deficit reduction. 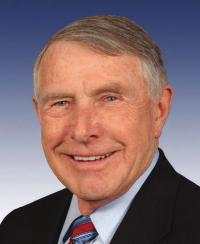 Sabo was diminished in his rank on the Budget Committee, but not in his drive to keep the focus on the deficit reduction side of the equation. When other Democratic leaders decided not to put forth an alternative to the GOP tax cuts, Sabo split off from them and joined forces with a bipartisan effort to delay tax cuts until the budget was balanced. That surprising maneuver drew substantial media attention to his arguments.

At the same time, Sabo broke his pattern of low-key rhetoric to accuse Republicans of offering ideologically driven promises rather than serious efforts to shrink the deficit. Sabo publicly warned Kasich that he ultimately would be judged “by whether you have the capacity to move away from ideology to practical reform.”

Sabo also warned that the Republicans had pledged themselves into a position where they would be unable to pass a bill that Clinton could accept.

The upshot was a partial shutdown of the federal government in 1995, resulting in months of chaos.

Working relentlessly on several fronts, Sabo made a rare appearance on CNN’s Larry King show to needle the Republicans about their tax-cut plan, saying it was “rather strange” to try to balance the budget by going deeper in debt with a tax cut. Sabo also pushed the Clinton White House to back away from tax cuts until the deficit was erased.

Come 1997, when Kasich claims to have led the drive to balance the budget, Sabo kept up the punishing pressure. He led a group of House Democrats that tried to force floor action on the budget by mid-May, long before Kasich and the Republicans could agree on their strategy.

Truth be told, both sides at that point could see that the deficit was approaching zero.

Later in 1997, Kasich and Gingrich negotiated a balanced budget agreement with the Clinton White House.

“But little of it had actually kicked in when the government’s red ink had disappeared and surpluses swelled,” the New York Times said in its analysis.

Throughout that fractious, prolonged battle, Sabo often attacked Kasich’s goals and tactics but never Kasich himself. And Kasich responded in kind, frequently expressing deep respect for the civility displayed by his foe from Minnesota.

On May 18 that year, just before the House voted on its preliminary plan, Kasich took the floor to say, “Martin Sabo is as class an act as we can find in public life. He is a wonderful human being. I love Martin because he has fought the good fight, and he’s a man of conviction, and a man of courage and a man of principle. He will be a friend of mine forever.”

Kasich’s remarks drew a 30-second standing ovation from both sides of the aisle.