While the agendas adopted by councils and commissions usually run on at some length, those are the big asks. Yet because of the continuing impasse from divided government at the Capitol, those asks look much like what local governments requested — and didn’t get — a year ago.

That doesn’t mean the mayors, council members and commissioners can’t hope. Optimists lay out a scenario in which Republicans who control the House and the Democrats who control the Senate work out a grand compromise, especially on transportation. Republicans would get increased funding for the roads and bridges they’ve been promising voters in Greater Minnesota in exchange for allowing metro governments to increase local taxes for transit projects.

It could happen, even though the same compromise scenario was floated last year and never came to pass. Sessions in election years tend to harden positions rather than foster deal-making. And the renovation of the Capitol might cause lawmakers to get in and get out ASAP.

“We have to be honest that it is challenging,” said Minneapolis Council Member Elizabeth Glidden, who is chair of the Intergovernmental Relations Committee. “But I do think there are some opportunities. It is a short session, but you can still accomplish things if you have the will.”

St. Paul Mayor Chris Coleman took a different angle on the 2016 session’s unique dynamics, coming in a year during which all 201 seats in the Minnesota House and Senate are on the ballot.

“I don’t think they want to go back to their voters and say they went another year without achieving anything,” said Coleman. “That isn’t a good message to be running on.”

A big session for transportation

The 2016 session is vital for backers of the region’s next light rail project, Southwest LRT. If the session comes and goes without lawmakers providing for the final 10 percent for the $1.774 billion extension from Target Field to Eden Prairie, it will fall out of line for federal funds that would pay half the project’s cost.

That money could either be from a direct appropriation from the state or via an increase in the five-county transit sales tax — from .25 percent to 1 percent. If that increase is passed, backers have said the state match for SWLRT as well as other transit projects would come from the region rather than the state.

But House GOP leaders have expressed opposition to additional light rail projects, and have said they want transportation spending to fall more heavily on roads and bridges. 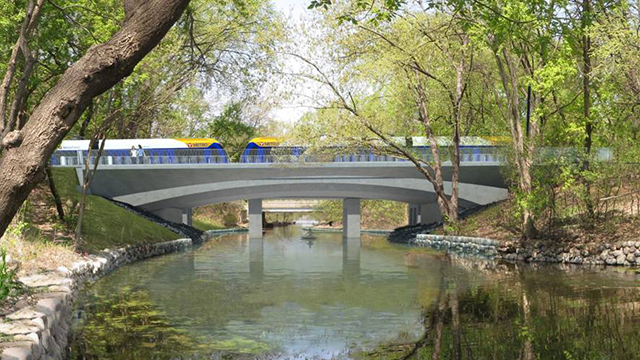 Most of the local governments in the region support increases in funding for roads and bridges as well as transit. After giving municipal consent to the alignment for the Blue Line LRT extension to Brooklyn Park, known as the Bottineau Line, the Minneapolis council passed a resolution expressing concerns that big transit projects would take money from smaller projects with more impact on racial and economic equity.

“If Southwest and Bottineau are built at the expense of other, less costly projects, that will engender opposition to Southwest and Bottineau,” the council resolution stated. It went on to endorse the .75 cent sales tax increase for the five counties that make up the Counties Transportation Improvement Board (CTIB).

On a related issue, governments in the region are battling with one another — rather than with the state — on calls to reform the governance of the Metropolitan Council. The makeup of the council has been an issue since even before it was formed. Currently, the governor appoints all members, who serve until renominated or replaced — an arrangement that has been in place since the early 1990s, when it was approved by the Legislature and signed by then-Gov. Arne Carlson.

But the unelected nature of the regional board still rankles some, especially local elected officials who have to live with the directives of the council on transportation, housing and growth. A coalition of elected officials from the so-called collar counties — Anoka, Carver, Dakota and Scott — have called for a new board made up of elected officials from the cities and counties that make up the region. This council of governments format is used in other regions, even if they are usually only planning bodies that also divvy up federal dollars.

That idea is opposed by Metro Cities, the organization representing cities in the region. While that group favors Met Council commissioners serving staggered terms, which would limit how quickly a new governor could replace them, it endorsed the current system of gubernatorial appointment. It does favor a stronger role for local officials in the committee that nominates council members, however.

In 2015, some Republicans suggested that rather than increase local government aid funding, they would reduce it as well as alter the distribution of current allocations. Three big — and mostly DFL — cities would see smaller checks, while smaller towns would see larger ones if the formula change were adopted. That idea didn’t get very far, with big-city elected officials saying it would only cause them to repeat the response the last time LGA was cut: increase local property taxes.

This session, the cities are worried again about reductions in LGA but also about a potential GOP legislative response to their response — a restriction on how much cities can increase those property taxes.

Tax breaks for a professional soccer stadium is another issue that was around in 2015 and went nowhere. A lot has changed since then, though.

Last year, the idea of property and sales tax breaks for a new stadium for a Major League Soccer expansion franchise was an orphan. Minneapolis officials hadn’t embraced the idea of tax exemptions for a stadium intended for the Farmers Market area — and no legislator introduced a bill to provide them.

Over the last 12 months, the team’s owners turned their attention to St. Paul, which last week approved agreements to locate the stadium on a former bus barn near Snelling Avenue and I-94. The city agreed in those deals to help the team win the two tax breaks, which have not gotten the same negative reaction from the governor and lawmakers that it did a year ago. 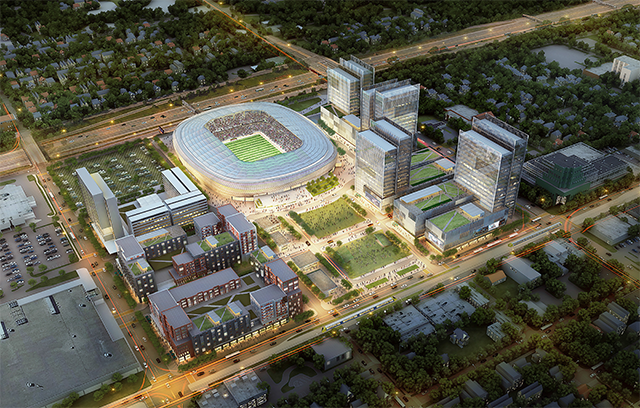 S9 Architecture/Populous
Last year the idea of property and sales tax breaks for a new stadium for a Major League Soccer expansion franchise was an orphan.

It’s worth noting that the team’s agreement to pay for the stadium and cover overruns on adjacent street and infrastructure work are null and void if the session doesn’t produce the tax changes. Coleman said he would love to see quick action, but expects the issue will be part of the end-of-session conversations over a tax bill.

St. Paul is also seeking legislation to further tax increment financing for transit-oriented development at the former Ford plant site. The city wants parks and open space as well as affordable housing to be eligible.

State agencies, colleges and local governments have also put in requests to be included in the capital bonding measure that will be considered this session. Gov. Mark Dayton set a starting point for the discussion by rolling out a record $1.4 billion bond request. But even that amount wouldn’t be enough to cover everything — local governments alone are looking for $767 million in spending for capital projects.

Minneapolis wants $31.9 million in state help to design and construct a major rebuild of the 10th Avenue Bridge, over the Mississippi River. The city also wants $2.5 million in state help to expand and enhance the regional Emergency Operations and Training Facility and $1.03 million to complete the restoration of the fence surrounding the historic Pioneers and Soldiers Memorial Cemetery.

Even though it is a Hennepin County request, Minneapolis considers the Lake Street Transit Access project on I-35W to be one of its major requests. That $25 million project is needed for the Orange Line bus rapid transit line between downtown and Lakeville and also includes better facilities for bus lines on Lake Street. Glidden said it is critical to win that funding soon because MnDOT must start work on a rebuild of the so-called Braid Bridges interchanges with I-94 by 2018. “It is very important to synch up with that construction,” Glidden said.

Hennepin County has also asked for $26 million to help build a new regional medical examiner’s center; $20 million to advance the work on the Bottineau LRT extension; and, with Ramsey County, $18.7 million for a joint juvenile justice facility.

The Minneapolis Park & Recreation Board will ask for $12 million to help with the Hall’s Island restoration and regional park; $2 million for remediation at Upper Harbor Terminal; $3 million for trail connections at 26th Avenue North; and $7.5 million for system-wide trail improvements.

St. Paul is asking for $48 million to rebuild the Kellogg Boulevard Bridge; $19.5 million for the Great River Passage Environmental Learning Center; $14.5 million for renovation of the Como Zoo Habitat Preservation Exhibit; and $3 million for the Wakan Tipi Center at the Bruce Vento Nature Sanctuary.

St. Paul is partnering with Ramsey County and Catholic Charities for $12 million to build the Phase II of the rebuild of the Dorothy Day Center. This money would go toward the new Higher Ground homeless shelter that will also deliver social and health services.

Trains, lanes and tax deals: what metro-area governments want from the 2016 state Legislature