With a work group in Minneapolis just completing its examination of paid leave — and a similar effort in St. Paul just getting underway — it appears both cities could adopt mandatory leave policies for local businessess this year.

But as the state’s two largest cities — home to an estimated labor force of 485,000 — move toward requiring employers to provide paid leave, a bigger question is emerging for those who employ people in both cities: will the rules be similar enough to make the administration of the law easier, if not exactly easy? After all, business owners who employ workers in and outside the city of Minneapolis have already complained about the potential headaches of having some employees accruing sick leave under the law while others don’t.

A tale of two cities’ policies

Enacting identical rules might seem like the logical solution, but it may be easier said than done. It would require St. Paul to duplicate the work of Minneapolis, which could adopt an ordinance before the St. Paul taskforce reports its own findings, something that might rankle the capital city’s sense of independence.

St. Paul Mayor Chris Coleman said he didn’t want to get ahead of the city’s Earned Sick and Safe Time Task Force, which met for the first time Tuesday, and is scheduled to deliver a report to the city’s Human Rights Commission by mid-May. “The point of the task force is to have all voices be heard and really understand the issue and how we can address it,” Coleman said. “If at some point there’s a way for us to be in some conformity with Minneapolis, that would be a logical thing to look at. But I don’t want to presuppose because I don’t know for sure what Minneapolis is going to do or where we’re going to go with that.”

According to an analysis of Census data and the National Health Interview Survey, St. Paul has similar gaps in paid leave coverage as Minneapolis, and the rest of the state. Among all workers, 58 percent have access to paid sick time, with Hispanic workers less likely to have coverage than other racial and ethnic groups, according to the Institute for Women’s Policy Research. The same analysis reported that service workers are the least likely occupation group to have paid sick leave.

Matt Kramer, the president and CEO of the St. Paul Area Chamber of Commerce, is a co-chair of the St. Paul task force. The business group has been skeptical about the city creating its own paid leave ordinance, thinking it should be a state issue. But Kramer said that if the city ends up imposing mandatory paid leave, it should have similar rules to those in Minneapolis.

“If we’re going to move forward it would be extraordinarily beneficial if they synced up,” Kramer said. He cited the example of a delivery truck driver who moves into and out of local government jurisdictions many times a day. That creates challenges for an employer, challenges that would multiply if the two largest cities had different accrual rates, for example, or different waiting periods before sick time could be claimed. Having different rules “opens up business to compliance violations.”

“We should provide business with the easiest way to do business,” Kramer said. While the St. Paul task force will look at how other cities have set up policies, he said he will raise the question of conformity. “Let’s have a discussion about making it easier to comply with.”

Brian Elliott, the executive director of the state council of the Service Employees International Union, has spent the last three months on the Minneapolis Workplace Partnership Group, which will make its recommendations to the city council Wednesday. Elliott agreed that having similar rules in both cities is a good thing. But he also said he thinks the issue will take care of itself. “There are 11 million people in the U.S. with paid leave,” Elliott said. “The policies are very very similar. New Jersey has 10-plus jurisdictions and they are nearly the same if not identical to each other.”

That happens because each city that looks at the issue looks at existing ordinances from other municipalities. The Minneapolis group, for example, benefitted from large spreadsheets prepared by city staff showing in detail how other cities have made the rules. “Our work mirrors other cities,” Elliott said. ”I wouldn’t say St. Paul will do exactly what Minneapolis did. It is its own jurisdiction. But it is fair to say both jurisdictions will do what are the best practices across the country.”

Bruce Nustad, the president of the Minnesota Retailers Association, which has members in both cities is an alternate member of the Minneapolis task force, said it is important for the rules to be the same. Doing things differently would lead to confusion for workers and difficulty for employers. But he said he thinks St. Paul will take its own path and that to reconcile the two will require conversations between the two cities. Given the timing, it could require Minneapolis to change some of its rules.

That potential is a reason why Minneapolis should have a longer implementation period for whatever ordinance it adopts — perhaps up to a year, Nustad said. 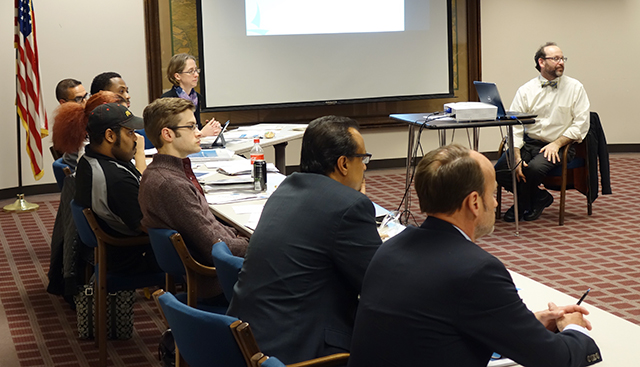 But Minneapolis work group chair Liz Doyle said while it might be helpful to have identical rules, it isn’t necessary. “There are certainly some advantages to having similarities,” Doyle said. “But it will be up to elected officials in St. Paul and their work group to decide. They may opt for something different. I think that’s fine. Maybe there are reasons why that makes sense for the workforce in St. Paul.”

One of those task force members, Blue Plate Restaurants CEO David Burley, says common rules might be helpful, but said he won’t try to push the St. Paul group toward adopting the Minneapolis policy. “I plan on learning about the needs and the costs and working with the rest of the task force members,” said Burley, whose company has restaurants in both cities. After one meeting, Burley said his sense of the group is that they think an ordinance is needed but said he thinks the St. Paul group is more representative of different groups and different thoughts on paid leave.“I think they outdid Minneapolis in that regard.”

Coleman and Kramer agree on one thing, that a statewide law is preferable to city by city action. “The most logical thing would be for this to be on a statewide level and frankly on the national level,” Coleman said. “Consistent rules for employers is important.” But cities across the country that are adopting or considering ordinances are doing so because of inaction in state Legislatures.

Kramer said business organizations would prefer statewide rules, and said there is talk at the Legislature of a bill to preempt local governments from acting on benefits such as paid leave, family leave and minimum wages. As in 2015, such bills have a rough road because Democrats who control the state Senate are likely to block them. At the same time, Republicans who control the House are unlikely to approve mandatory benefits laws.

The Minneapolis work group held its last substantive meeting Wednesday, though it will get together Monday, mostly to proofread the final report and take a formal vote. The report will be delivered to the council’s committee of the whole March 16.

The group decided there is a strong need in the city for mandatory paid leave. “There is wide agreement that employees with no access to paid sick time would likely benefit from such access and general, though unproven, consensus that workplaces generally would likely benefit broadly by way of less turnover, improved morale, increased ability to recruit and retain talent and increased health and safety within the job site,” the report concludes. It asserts that the group sought “to put forward a balanced approach that both provides access to paid sick time and minimizes the administrative burden of doing so.”

Under the rules, all employees would be covered as long as they work at least 80 hours a year within the city limits. The ordinance would cover workers within the city regardless of where the employer is located. So-called micro employers — those with fewer than three workers — would be able to opt into the benefit. If they don’t, those workers could not be punished for taking unpaid time off when sick.

According to the rules, time off can be used if the employee is sick or if family members are sick. The time could be used for physical or mental illness, for injuries and for medical appointments. Safety leave, as defined in state law, is also eligible, a provision that could apply in domestic violence situations. 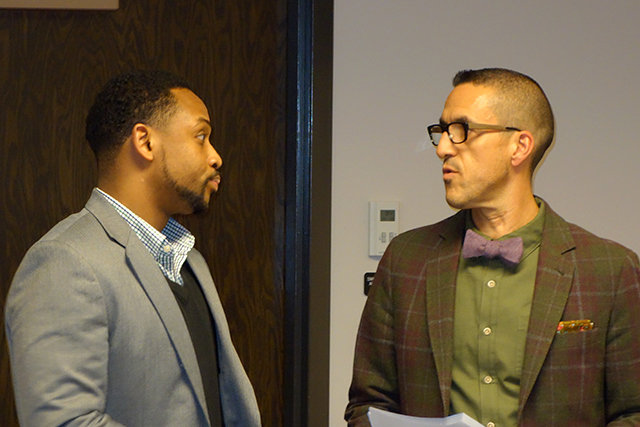 Accrual would begin immediately at a rate of one hour for each 30 hours worked, but employers could require workers to be employed for up to 90 days before paid time could be claimed. Employers could cap accrued time at 48 hours.

His largest objection is to Minneapolis acting alone, that the cities that surround it won’t have the mandate. He had pushed for a voluntary program with incentives for businesses that offer paid leave. “I can’t agree with where it ended up,” Cramer said.

But there appears to be a majority to support the final report. Ron Harris, a work group member representing employees, told the story of how he got pneumonia twice as a child. “The first time my mom took off work and she got penalized for it. The second time I almost died and she lost her job because she had to take time off to take care of me,” Harris said. “That’s why I’m so passionate about this issue and it almost brings me to tears that you spent so much time trying to figure out how to make people’s lives better.”