The Minneapolis City Council and the Minneapolis Park and Recreation Board appear to have a deal that will provide city money for a 20-year program to rehabilitate neighborhood parks, heading off a proposed parks levy referendum vote this November.

The plan unveiled Monday will use a combination of revenue sources to provide $10.5 million a year for Minneapolis parks and $21.2 million for street repaving in the city. The money — about $800 million over the 20 years — is to come from some excess sales tax revenue; an increase in stormwater fees; a reduction in the city’s pension fund contributions; a bond sale; some cash; and an increase in the annual property tax levy.

But while the deal’s drafters say it benefits from having multiple revenue sources, new property taxes would make up 82 percent of the money. The annual levy increases attributed to the plan would be in the range of 0.7 percent a year — on top of the projected annual levy increase for regular city operating costs of between 3.87 percent and 3.16 percent.

For those counting, this is the fourth — and likely final — proposal to get money into the city’s neighborhood parks, which have suffered from years of deferred maintenance.

This compromise plan is very close to the one proposed earlier this month by Council President Barbara Johnson and Council Member Lisa Goodman. Yet it also responds to concerns by Mayor Betsy Hodges and Council Ways and Means Chair John Quincy: that the funding sources relied on in the Johnson-Goodman plan weren’t reliable, and that a means of responding to a shortfall in roads funding wasn’t accounted for, which Hodges and Quincy outlined in a plan of their own. All of the proposals were in response to the park board’s move earlier this spring to ask voters to raise their property taxes as a means of providing $15 million a year to parks over the next 20 years.

After hearing about the newest plan Monday, the Ways and Means Committee moved it forward for a Wednesday hearing, with a possible vote by the full council coming Friday. If the council passes the plan, the park board could approve it next Wednesday, just days ahead of a deadline for the start of signature gathering to put the issue before voters.

The compromise was outlined Monday by Minneapolis Chief Financial Officer Mark Ruff, who said the plan layers the different funding sources over a 20-year period. “These are needed improvements,” Ruff said. “There is a will to get this done but within the parameters of what is good financial management, what is balanced financial management.”

After Monday’s committee hearing, Park Superintendent Jayne Miller said the plan meets the concerns of the parks board and closely matches an earlier deal reached between Board President Liz Wielinski and council members Goodman and Johnson.

“I am very comfortable with the language in the resolution, that it addresses what we need,” Miller said. It will eliminate the need for the board to ask voters for a property tax increase, she said, and it signals a new relationship between the city and the park board.

“The citizens of Minneapolis don’t care who does the work, they just want it done,” Miller said. “It says a lot if the two largest public agencies in the city can work out the issues and not have it be a battle between the two of us. In the 133-year history there has always been tension between our two agencies. This is historic if we can do this.” 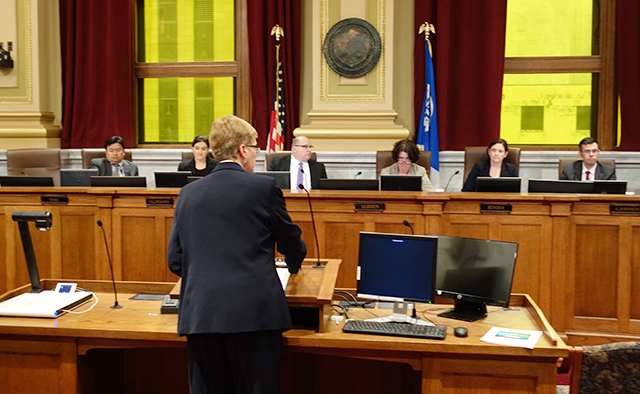 Not directly involved in creating the compromise plan were any park board staff or board members. Park board leaders were briefed Monday morning.

Quincy and Glidden were among the skeptics who — along with Hodges — raised questions about the adequacy of the revenue sources used in the Johnson-Goodman plan. But those skeptics were as interested as those backing Johnson-Goodman in heading off a parks referendum. That’s because there was a fear by some in city government that a referendum would sop up potential revenue from voter-approved levy hikes, making it difficult for the city to use the same avenue for other pressing needs, especially road repairs.

The new compromise plan was tentatively endorsed by several skeptics of the original Johnson-Goodman plan, including Council Member Lisa Bender, who had raised questions about the size of the package, the timeline for funding it and the sources of the revenue. Also Wednesday, Council Member Alondra Cano, who had questioned how the money would be spent in communities of color and communities with high poverty, complimented the park board’s equity plan.

The Minneapolis Park and Recreation Board got its first look last week at that plan. Using a complex formula created by board staff, it relies on demographics measurements of neighborhoods surrounding city parks as well the condition of park “assets” — recreation centers, fields, pools, playground equipment — to allocate the first five years of money from the park rehabilitation program. (More information on the board’s priority rankings can be found on their website.)

A total of 12 points could be awarded based on various measurements of a neighborhood, such as population density, youth population, crime statistics, and whether it’s a racially concentrated area of poverty. Another 11 points were available based on the condition of the park, the age of the “assets” and how recently the park has seen money for renovation.

There has been some disagreement about how the City Council can be sure the equity program stays in place. Some council members have proposed including language about how the money will be spent in the joint resolution governing the agreement that both bodies must adopt. 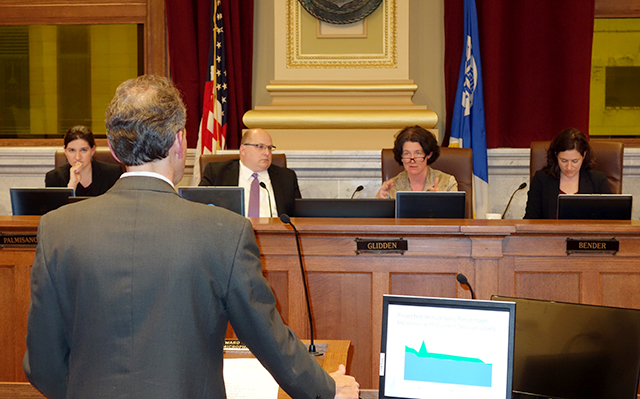 But the park board is protective of its independence from the council and the mayor. In recent months, the board has twice unanimously overridden Hodges’ vetoes of resolutions — one that sought to place a funding referendum on the November ballot and then the acceptance of the Johnson-Goodman funding plan.

Goodman has said that it should be left totally up to the Park and Recreation Board to decide how to spend the money for the parks. But testimony at an April 13 public hearing on the proposal included expressions from many residents who wanted assurance that the money would be spent in high-poverty neighborhoods.

In a letter to the council following that hearing, Park Superintendent Miller and board president Wielinski attempted to describe work done to address equity in parks funding. The yearlong effort to demonstrate unfunded needs in the parks — dubbed “Closing the Gap” — included a series of neighborhood meetings.

“Our efforts to equitably invest in parks and address racial equity in the park system, however, began many years before the Closing the Gap initiative,” the pair of park leaders wrote. “We consider this work to be an ongoing process, one that improves with time and evolves through input from the communities we serve.”

After pointing council members to a brochure showing how existing parks improvement money has been spread around the city’s four parks service areas, Miller and Wielinski wrote that they hoped it would “dispel the unfortunate misperception shared at the public hearing that the [Parks and Recreation Board] spends less in underserved areas of the city.”

According to the details of the deal, the new money could not be spent in what are called regional parks — those like Minnehaha Falls, Theodore Wirth and the Chain of Lakes, which benefit from the Metropolitan Council’s funding mechanism for parks with regional use. Nor could the money be spent at the city’s five golf courses. That leaves the 157 neighborhood parks, described in the proposed ordinance as “generally less than two blocks in size,” though they can be larger. 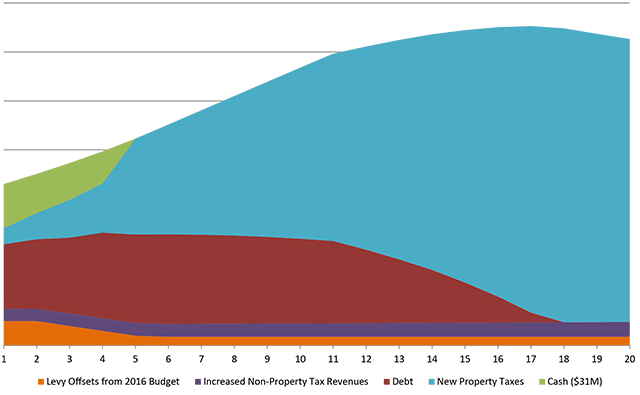 While much of the focus for more than a year has been on parks, the roads funding plan emerged within the last month. Council members had been briefed on road conditions and a gap in funding, but it was only after the parks referendum was proposed and the subsequent Johnson-Goodman alternative surfaced did the idea of a 20-year roads plan emerge. Hodges and Quincy produced the framework of a combined parks and roads plan in response to the Johnson-Goodman proposal.

Glidden said Wednesday that the roads projects have the potential of being very important for the city because they would include the creation of streets and sidewalks that meet 21st century needs.

“They allow us to reformat how we think about our streets because we are moving curb and gutter, we are adding sometimes green space, better aligning our sidewalks,” Glidden said. “These end up being transformation projects in our neighborhoods.”