It was like most hearings at the Minnesota Capitol: Local officials, union members and business leaders extolled the virtues of the project in question, which they said would bring new economic development and jobs into their community. Legislators asked a few questions but mostly praised the idea. Two people got up to testify against the plan, but legislators asked no follow up questions and dismissed some of their comments. The whole thing was over in under an hour.

The one thing that wasn’t at all usual: all this was for a hearing about tax breaks for a sports stadium.

The debate over building a stadium in St. Paul’s Midway neighborhood for a Major League Soccer franchise cleared its first hurdles in the Legislature this week: A House committee moved forward with the yet-to-be-constructed facility’s liquor license and a Senate committee “laid over” two tax breaks — on property taxes and construction materials — for inclusion in a broader tax bill, a move that signals legislators generally support the bill and want to keep it alive.

Both hearings were quiet, quick and uncontroversial – a far cry from previous debates about stadiums at the Capitol. It took nearly a decade to pass a deal to construct a new home for the Minnesota Twins, and the entire 2012 session was consumed by negotiations over the $1 billion Vikings stadium, which drew hordes of opponents and supporters to St. Paul, with fans dressed in purple and gold packing critical legislative hearings and floor votes. It’s also different from the conversation over the St. Paul Saints ballpark, which only moved forward after legislators allowed Gov. Mark Dayton’s administration to hand out $50 million in bonding dollars in 2012 to various projects, including $25 million for the ballpark.

But the soccer stadium is a fundamentally different proposal, St. Paul Mayor Chris Coleman told state senators on Thursday. The plan to redevelop an old bus garage site and build a $150 million soccer stadium is being financed by team owners and a group of private investors, unlike all of the other stadiums approved by the Legislature, which required some kind of direct public subsidy. For the Vikings stadium, the state contributed nearly $500 million from the general fund, while the city of Minneapolis put up $150 million.

“The fact of the matter is, this is a deal unlike any other we have seen because the team is paying for all the costs of the construction of the stadium,” Coleman said. “They are all privately financed. What we are asking for is the two exemptions. In every other deal that we’ve talked about…they have been, quite frankly, just kind of assumed that property would be tax exempt and there would be a sales tax exemption on materials.”

That’s not to say there aren’t negative feelings over stadiums at the Capitol, where the expression “stadium fatigue” is thrown around a lot, especially by Republican House Speaker Kurt Daudt. Senate Majority Leader Tom Bakk has also expressed hesitation about granting sales tax exemptions on construction materials and equipment. The two proposals still need to make it through more committees in the House and Senate and then pass off both floors before they’re finalized. Legislators brushed off the same proposal last year, when the team still hoped to build the stadium in Minneapolis.

Bill McGuire, the principal owner of the Minnesota United FC soccer franchise, told senators it would be “very problematic” if the tax breaks aren’t passed this year and could mean “that the franchise would be lost.” That’s because every other cost is being covered privately, he said. “They are small dollars, but they are very meaningful dollars.” 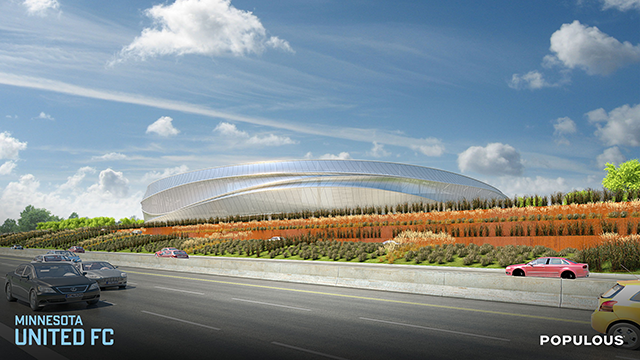 Populous
A rendering of the Midway soccer stadium as seen from Interstate 94.

Former St. Paul City Council candidate and resident Tom Goldstein, who was one of the only people to show up to both hearings to oppose the stadium, said that St. Paul has also committed up to $18.4 million for streets and other infrastructure improvements around the stadium site.

“We just spent $65 million on a Saints ballpark, of which the state contributed $27 million, the city appropriated $11 million for a practice facility for the Minnesota Wild, and now another $18 million in just infrastructure improvements for the soccer stadium,” he said. “That’s close to $100 million overall that’s being spent, while all these other projects are being neglected.”

But for a stadium that wouldn’t start construction for at least three months and still faces a few hurdles in St. Paul, legislators didn’t seem very concerned about the plan in the committees this week. Both bills have bipartisan authors, who expressed confidence that other legislators would support the proposal once they got into the details.

“I just want to understand this: We’re looking at a bill to authorize a liquor license for something that doesn’t exist?” asked Rep. Greg Davids, R-Preston, at the House Commerce and Regulatory Reform Committee on Wednesday, as they discussed moving forward with a liquor license for the facility.

“That’s the beauty of it,” committee chairman Joe Hoppe replied.

Davids just laughed and nodded and few legislators praised the proposal before it was quietly set aside to discuss later.