It was the blowup most people had been expecting for days.

Top leaders of the Minnesota Legislature were in and out of negotiations all weekend, painstakingly moving piece-by-piece to reach a deal to spend a $900 million budget surplus on tax cuts and things like broadband and education. An agreement for a long-term transportation funding bill and a large package of construction projects, known as the bonding bill, was harder to reach. But Sunday night, in the final hours before the deadline to pass legislation, things seemed to be coming together.

Democrats in control of the Senate and the Republican majority in the House had agreed to a $990 million bonding bill and a one-time infusion of cash to fund road and bridge projects, a move that would temporarily bridge an impasse over transportation funding. With less than 15 minutes to spare before midnight, the House passed the bonding bill on a 91-39 vote, sending it off to the Senate to do the same. But DFL senators were furious to learn the bill lacked funding for transit, so they quickly amended the proposal and sent it back to the House.

When word of the amendment started to spread across the chamber, House Majority Leader Joyce Peppin stood up and moved to adjourn the House, six minutes before midnight — removing any chance for the new version of the bill to pass.

And that was that.

After it was all over, both sides were at a loss as to what had even happened.

“Why they made a decision to go home … is a mystery to me, but they have killed the bonding bill,” Senate Majority Leader Tom Bakk said on the Senate floor after the House adjourned.

Republican House Speaker Kurt Daudt said he didn’t know exactly what the Senate did to the bill, but he feared senators had attached funding for Southwest Light Rail, which Republicans had opposed all session.

“Tonight, it may look like Southwest Light Rail may have killed $700 million of money for roads and bridges across the state of Minnesota, and I hope that’s not the case,” Daudt said immediately after adjournment.

It was chaotic end to a frantic weekend of deal-making to conclude the short 2016 legislative session on time. In the end, the bonding bill and transportation went down together, after being linked by legislators for most of the 10-week session. Lawmakers did manage to pass a $300 million supplemental budget bill and a $260 million tax cut bill in time, which are now on their way to the desk of Gov. Mark Dayton’s, who hasn’t promised to sign anything.

Both Bakk and Daudt said they were open to coming back in a one-day special session at some point to take care of the bonding bill and transportation proposal, as well as deal with complying with the federal Real ID Act, another issue that fell apart in the session’s final hours.

“We’ll probably talk about this bonding bill; if the governor feels it’s important, he can call us back for a one-day special session,” Daudt said.

Dayton has 14 days after the end of a biennium to decide whether he wants to sign the supplemental budget bill and tax bill. Bakk said he intends to reach out to Dayton sometime after that period to ask him to consider a special session. 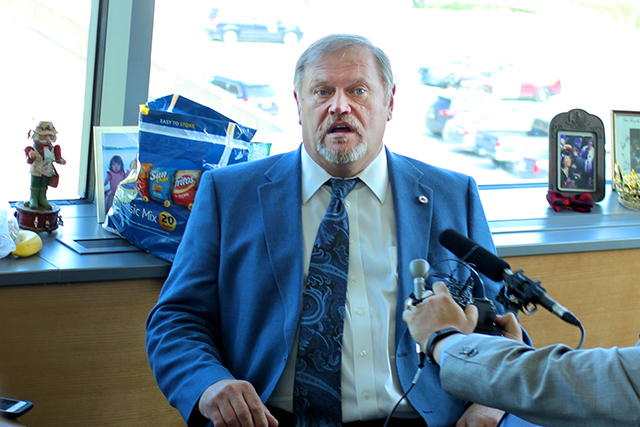 “I think the governor certainly wanted a bonding bill this year. Once everybody settles down and some of the emotion comes out of the room and people kind of resume their normal lives …sometime after that, I intend to reach out to him,” Bakk said. “We’ll see how the governor feels about that.”

But Dayton, who tried to call lawmakers back for several special sessions last year for issues like Real ID, didn’t sound too keen on the idea a few days earlier.

“I don’t see any reason to have a special session,” Dayton said in a press conference Friday. “They have 48 hours to get their work done, and they’ve had 11 weeks. They started working on a lot of this formally last November. They’ve had all this time. If they can’t their work done then they haven’t gotten their work done.”

Lost amid all the noise about the session meltdown was the fact that a supplemental budget bill and tax cut proposal passed off both the House and Senate floors with overwhelming support.

The $260 million tax cut bill contains a one-of-a-kind tax credit for families who contribute to a 529 college savings plan for their kids, as well as additional credits up to $1,000 for students with student loans. The bill was considered a big win for Greater Minnesota, with property tax deductions for farmers, as well as property tax cuts for small businesses, veterans and the elderly. 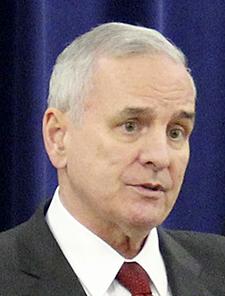 The final $300 million budget bill had wins for all sides, including Dayton, whose big priority — a voluntary preschool proposal — got $25 million in funding. After massive disagreements on the issue last year, which sent legislators into a one-day special session over education and other funding, Dayton will see the program get $55 million each year starting in 2018.

Democrats and Republicans also agreed to spend $35 million to expand broadband infrastructure and another $35 million for racial equity proposals, some of which will be ongoing funding. State government programs and agencies will get an additional $28 million in the budget bill, $27 million for jobs and economic development and $25 million for cops and courts.

Bakk and Daudt said they included many of the governor’s priorities in the final budget bill, and they hope he signs it. Friday, Dayton didn’t make promises to sign a tax bill without a budget bill he found “acceptable” in hand.

“I understand that the House is not enthusiastic about the supplemental spending, but I am, and I have a say in this,” Dayton said. “I want to be emphatic and clear.”

The whole weekend brought back fresh memories of the 2015 legislative session, when major negotiations on the budget didn’t start until the final week of session, and even then moved slowly and took place behind closed doors. This year, the final 599-page budget bill was given to House members four hours before they were set to vote, while the bonding bill arrived at the House moments after they already started to debate the bill.

DFL House Minority Leader Paul Thissen was particularly outspoken about the process, repeatedly railing against House Republicans on the issue throughout the weekend.

“Here we are again, doing the exact same thing one year later, after doing nothing for 10 weeks, shutting out the public and cramming everything into a single day,” Thissen said. “Legislators are reading about what’s happening in bills on Twitter. Minnesotans hate it. They hate it and they should.”

Some blamed divided government. Bakk put the blame on Republicans for waiting until the final week of session to release their $800 million bonding bill, delaying the start of negotiations on that proposal. The DFL-controlled Senate tried and failed to pass a $1.5 billion bonding bill weeks earlier. “I don’t think you can fault the DFL Senate; we gave it our best try, we put a bill up plenty early,” Bakk said. “The House just didn’t seem to make bonding a priority.”

For his part, Daudt seemed frustrated with the process as well. “I’m living on two hours of sleep a night for the last three nights, and toothpicks to prop my eyes up, and it shouldn’t come down to that,” Daudt said. “Unfortunately, in our system, it does.”

But that could change: A provision quietly tucked into the supplemental budget bill that passed would direct state legislators to look around the country to learn how other states set their budgets and create recommendations for different ways to meet deadlines.

“It’s actually something the speaker and I feel pretty strong about,” Bakk said. “The decision to put it in was his and mine.”