With just one week to go before lawmakers are required to adjourn, Gov. Mark Dayton offered legislators not one, but two options Monday to break an impasse over a 10-year transportation funding package.

Both of Dayton’s proposals raise $600 million a year for transportation over the next decade. The first plan raises the gas tax by five cents, increases license tab fees and diverts some state money collected in auto part sales taxes into a fund for transportation. The second plan leaves the gas tax out — a major issue for Republicans — but significantly raises license tab fees each year to make up the difference.

“I’m not willing to settle for less,” Dayton said. “It’s incumbent now on the Legislature, the four caucuses and the conference committees to decide if they don’t like my proposal.”

House Republican Speaker Kurt Daudt said he appreciated that Dayton omitted the gas tax from at least one of his plans, but he didn’t think the public would support major hikes in license tab fees. Dayton’s plan also raises the metro-area sales tax by five cents to pay for $280 million in transit projects each year, but Republicans said that’s too much spending for those projects.

“He did, in one of his offers, drop the gas tax but he did replace that with another tax that — again — comes out of Minnesota families’ pockets,” Daudt said after the meeting. “We had hoped for a little more movement out of the governor, but we’re still optimistic that we can come up with a plan.”

Daudt didn’t close the door completely on raising license tab fees, but he said with the state having a $900 million budget surplus, Democrats should consider dedicating more general fund money to roads and bridges.

Dayton is trying to break an impasse between Democrats who control the Senate and Republicans who control the House over a long-term transportation funding deal, a stalemate that has lasted more than a year. Senate Democrats initially proposed a 16-cent wholesale tax increase on gasoline, but then bumped that down to a 12-cent gas tax. Republicans said they don’t want any gas tax increase at all, instead calling for more than $300 million in state revenues collected from auto parts sales taxes put toward roads and bridges. 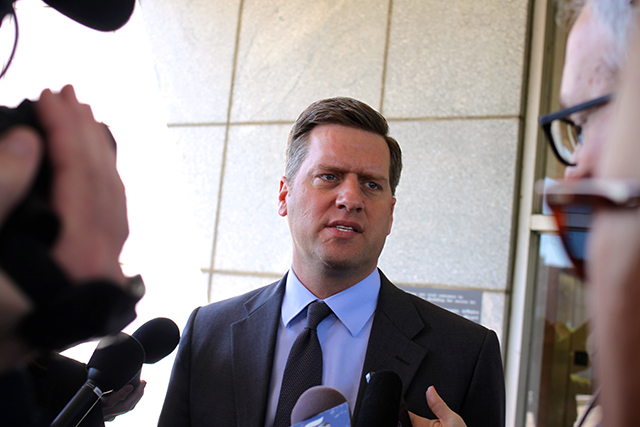 MinnPost photo by Briana Bierschbach
Speaker Kurt Daudt: “We had hoped for a little more movement out of the governor, but we’re still optimistic that we can come up with a plan.”

Republicans have shown some willingness to accept a metro-area sales tax for transit, but they’d also like to see a handful of changes made to the Metropolitan Council, a regional planning agency, in exchange. One of those changes is making members of the council, who are now appointed by the governor, local elected officials who have to face the voters. Dayton said he’d be willing to accept some changes to the council to reach a deal on transit.

Legislative leaders were going to present the plans to their members Monday before reconvening to continue negotiations. Other issues, including a bonding bill and proposed tax cuts, have stalled while legislative leaders attempt break the gridlock on transportation. The 2016 session is constitutionally required to adjourn by midnight on Monday, May 23. Dayton said the negotiations are at a “tipping point right now.”

“It depends on if 201 legislators can agree to something that they don’t agree with entirely,” Dayton said. “I think it’s possible, but I think it’s either success or failure, there’s no in between. I’m not up facing the voters, but I wouldn’t want to go before the voters next fall and say we failed on the most important measure this session faces.”