When the patch of Minneapolis known as the East Commons park opens sometime this summer, it likely will be managed by an entity personified by the greenish-yellow clad “ambassadors” who populate downtown.

The city plans to contract with the Downtown Improvement District to manage the park when it opens sometime this summer, which officials hope happens in time for the first events at the new Vikings Stadium.

The DID, which provides cleaning, maintenance and security in downtown (paid for via assessments on the area’s businesses), will provide similar tasks for the park through the end of 2016. After that, the city hopes to have reached a permanent deal for the park’s maintenance with the nonprofit Green Minneapolis, which is handling fundraising for the project.

Designed by San Francisco-based Hargreaves Associates, the park that will open this summer will include most of the features planned for the final version of the project, including what will be called the Great Lawn on the eastern block of the park. Missing will be a restaurant pavilion, a water plaza and some terracing. Yet it will be much more than what was once planned to be ready for the stadium opening.

Initially, as part of the complex deal to build two office towers and an apartment building surrounding the park, the contractor, Ryan Companies, promised only to cover the park space with grass prior to the first events at U.S. Bank Stadium. Only after $22 million in private money was raised would the permanent park then be built. The hope of park backers was that the complete park would be ready for the 2018 Super Bowl.

When fundraising was slower than hoped, there was a change in phasing, and in Jaunary, the council approved an amendment to the Ryan deal that called for the company to install much of the landscaping and hardscaping right away. Crews are currently shaping the two large lawns, prepping for hardscape installation and readying the tree planting.

When the park opens sometime this summer, it will have all of the grassy areas, trees, plantings, pathways and edging outlined in the final design. Also in place will be the irrigation, plumbing, drainage and electrical work needed when the rest of the park is completed. The total cost of all that work: $10.8 million.

Council Member Jacob Frey said it made more sense to build as much as could be built in the first phase rather than come back later for extensive work. “This has been an evolving process,” he said. “What was finally decided was you save money to do it all at once – you don’t have to bring the tractors back for phase two.” When fundraising reaches the $22 million level – up from the current $14 million – park backers hope to add the features that have been set aside for now.

Might residents decide they like the park as it is and object to adding the pavilion and water plaza? Frey said the park will not lack for open space and the pavilion could include a restaurant that would help pay for ongoing park operations.

“No one is going to say there’s not enough space to kick a soccer ball around,” he said. 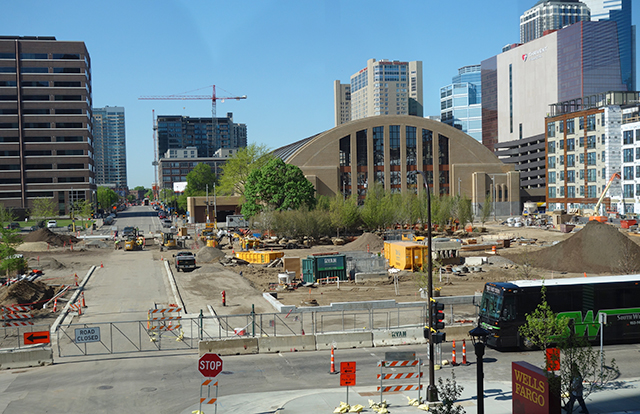 MinnPost photo by Peter Callaghan
A view of the Commons, looking southwest toward the Armory.

The city also expects the rebuilt Portland Avenue, which bisects the park, to be opened this summer. Portland was a three-lane street with a bike lane and two parking lanes. The new design calls for two traffic lanes and a bike lane.

The temporary contract, if approved next week by the city council, would pay the DID $600,000 to clean, patrol, maintain and do some programming of the park space through the end of 2016. The cost would be split between Green Minneapolis and the city, with the latter’s $250,000 share coming out of money set aside in the 2016 budget for work on the streets and sidewalks around the park. Other city infrastructure money has been tapped for that work, freeing up the budget set aside for other uses.