Minneapolis has become the first city in Minnesota to require most employers to offer paid sick leave to workers.

It probably won’t be the last. On Friday, Minneapolis city council gave unanimous approval to an ordinance that creates a mechanism by which the city will enforce paid sick leave rules on workplaces of six or more employees.

In an amendment to the ordinance that was included by the council’s committee of the whole on Thursday, the city will also require that smaller workplaces allow workers to accrue and take unpaid leave for illnesses, medical appointments or to care for sick family members.

Just five months after an acrimonious city budget debate that left the council divided, the 13-member council has now mustered unanimous support for a pair of policies many members called historic. The paid leave plan follows by less than a month the unanimous adoption of a 20-year funding plan for parks and streets.

On Thursday, Mayor Betsy Hodges called the paid leave ordinance a “landmark measure,” saying the lack of paid sick leave is a public health issue, and that the lack of paid leave falls most-heavily on lower wage workers that are predominantly women and people of color.

After the council’s committee of the whole spent nearly two hours working through amendments to the ordinance Thursday  — most of which passed unanimously and none with more than a single ‘no’ vote — council members praised just about everyone who had touched the issue. As with the park and street vote, some council members saw the process for getting the ordinance done as a recipe for working through future controversies.

“My heart is pounding right now,” said Council Vice President Elizabeth Glidden, who is chair of the committee of the whole. “This is one of the most impactful things that we have been part of ever.”

Council Member Lisa Bender said she was proud of the city and the council. “We have created a huge new protection for workers in our city,” she said. Council Member Andrew Johnson noted that the city isn’t the first in the nation — in fact a few dozen cities, counties and states have acted before Minneapolis — but he said it will be the first in Minnesota. That could lead the way to other cities and perhaps the state adopting paid sick leave.

“I am hopeful that Minneapolis taking on this ordinance will help, along with St. Paul, Duluth and other cities, will help propel action at the state level,” he said.

A long path to passage

Council Member Cam Gordon reminded the council of events last fall when a first run at sick leave and other worker protections ended in failure and disappointment. The controversies were less about paid leave and more about the other planks of what was dubbed the Working Families Agenda. Also in that package was a proposal to require that employers give workers advance notice of their work schedules, with penalties for those who did not.

“When we did that we revealed a divide, a disconnect that was going on in the city between some of the businesses,” Gordon said. “The council was caught in the middle.”

The “fair scheduling” provision was dropped due to opposition from business — both large and small. While supporters expected pushback from big employers and chambers of commerce, they were not ready for complaints from small retailers and restaurant owners. And while the paid leave plan drew less opposition, the council and Hodges decided to send it to a work group that included business, trade group, union and worker representatives.

The Workplace Partnership Group had a dozen public hearings and spent two months working through the issues. The final ordinance expected to be approved Friday draws heavily from the work group’s report. Gordon said the process sets the council up well to take on hard issues in the future”

Under the ordinance, employees in workplaces with six or more workers would be allowed to accumulate one hour of sick leave for every 30 hours worked, topping out at 48 hours of accrual each year. Workers could rollover unused sick leave from one year to the next until they accumulate 80 hours. That leave could be taken when the worker or a family member is sick; for physical and mental illnesses or injuries; and for medical appointments. In cases of domestic abuse, sexual assault or stalking, time could be taken for treatment, counseling, relocation or legal proceedings.

The ordinance will take effect on July 1, 2017 but has a phase-in for enforcement. For example, a first offense for any employer not adhering to the rules during the first year of implementation, from July 1, 2017 to June 30, 2018, would not incur a financial penalty other than reinstatement of improperly withheld leave pay for the worker. Second offenses in the first year — as well as any offenses in the second and subsequent years — could result in fines and penalties.

An employer would not have to be based in Minneapolis to be subject to the ordinance, nor does the law only cover workers who have a regular workplace in the city. A delivery driver or repair person who moves into and out of the city during a work day would be able to accumulate paid leave for each hour worked within the city. There is a threshold, however, for eligibility: a worker who spends fewer than 80 hours working within the boundaries of Minneapolis in any given year would not be covered. 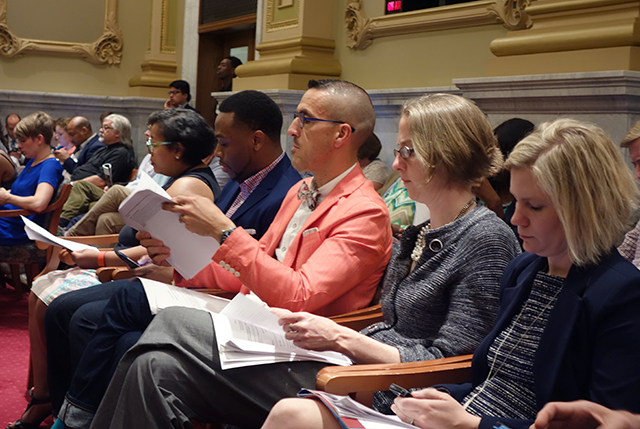 The ordinance wouldn’t allow employers to make an employee’s use of the leave conditional on the worker finding a replacement for themselves, or on the employee arranging to trade shifts with another worker. But it would allow employers to require documentation for a worker to use more than three consecutive leave days.

Employers who already offer paid leave in excess of what is required under the ordinance would not have to offer additional days. Policies that exceed the minimums will be deemed to be in compliance but the council Thursday asked city staff to flesh out the details of how to judge whether a private plan satisfies the city standards.

The city’s civil rights department will enforce the ordinance and handle complaints, which could be brought by a worker or anyone else. Employers would be required to maintain employment records for three years and would be deemed in violation of the ordinance for refusing to make those records available to investigators. Appeals would go through hearings officers and then state courts.

In addition to technical amendments and clarifying language, there were some substantive changes made at the meeting Thursday. An amendment adopted by the committee added back in a recommendation of the work group: that employers with five or fewer employees be required to offer unpaid leave and not punish workers who make use of such leave. The council clarified Thursday that businesses that are licensed by the city put those licenses at risk for repeated violations. That too was in the work group recommendation.

The council also created a special provision for new businesses, regardless of size, that would allow them to forego offering paid leave for the first year of operation, though unpaid leave would still be required of those businesses. And the council added an additional reason for using paid and unpaid leave: to care for a family member whose school or place of care has been closed due to bad weather. That would include a child’s school or an elderly parent’s adult day care.

The council also approved a direction by Council Member Abdi Warsame for city staff to create a small business compliance program to help small businesses — especially those started by recent immigrants — understand and follow the new ordinance. He said that and other amendments will “help me go back to my community and champion this, to say it helps all of us” and to tell businesses that “the sky will not cave, we will go on.”

While the ordinance had support from some business organizations, such as the Main Street Alliance, it was opposed by others, including the Minneapolis Regional Chamber of Commerce and the Minneapolis Downtown Council, both of which objected to the mandatory nature of the program. Though that provision remains, Hodges and some council members say they made changes to the ordinance in response to some concerns.

“I know this will be a big change for some people,” Hodges said. “I know it will be an adjustment. I will continue to work with businesses and workers to make sure this is implemented in a way that works for everyone.”