When it came to legislative requests for the construction of a St. Paul stadium for a new Major League Soccer franchise, two out of three ain’t bad.

That’s the message in a post-legislative session statement from St. Paul Mayor Chris Coleman, even if the optimism was tempered by the knowledge that statehouse politics could still ensnare the bill that holds the key piece of the stadium package.

Before the 2016 session started, Coleman and the owners of Minnesota’s MLS franchise asked the Legislature to keep the stadium and Midway-area land beneath it exempt from property taxes. The measure passed both the House and Senate, but Gov. Mark Dayton, a supporter of the soccer plan, said Monday he must review the tax bill that includes the provision before he commits to signing it.

It is possible that the tax bill — something House Republicans wanted — could be held back as Dayton and Senate Democrats negotiate the terms of a possible special session, which would be called to complete work on a bonding bill and a transportation plan. But Dayton said Monday he wouldn’t hold the tax bill hostage. And while he has 14 days to sign the bill, he said he didn’t expect to take that much time.

“I respect the fact that Governor Dayton needs time to review the bills passed by the Legislature and to determine any next steps with regards to a possible special session,” Coleman said in a statement released by his communications office. “I am grateful for his continued support of property tax exemption for the soccer stadium site, which has been tax exempt for many decades.”

Both chambers of the Legislature also approved a license to sell alcohol in the stadium, which is proposed to be built on the site of the former Metro Transit bus barn at Snelling Avenue and Interstate 94. Other sections of the bus barn site that are proposed to house commercial offices were not included in the tax exemption, and any of the buildings eventually built there will pay in-lieu-of property taxes equal to what would be paid if the land were private.

One key piece of the soccer request did not pass: an exemption from paying sales tax on stadium construction materials. Coleman, however, did not seem concerned with the failure to get the exemption, pointing out that existing state law allows retroactive sales tax exemptions on capital projects of regional significance.

“While the city sought an up-front exemption at the Legislature this session, which is easier from an administrative perspective, the lack of action simply means that contractors can move forward and a refund will be granted on the back end,” Coleman said.

CHS Field, the Lowertown ballpark for the independent league St. Paul Saints, ultimately received the sales tax exemption that way, and Dayton too said the retroactive exemption process would be available for the soccer stadium project.

As has been their practice, team owners were silent on the passage of the stadium requests (and the failure of the sales tax exemption). Only after Dayton acts on the bills will the team issue any statements, a spokesman said. 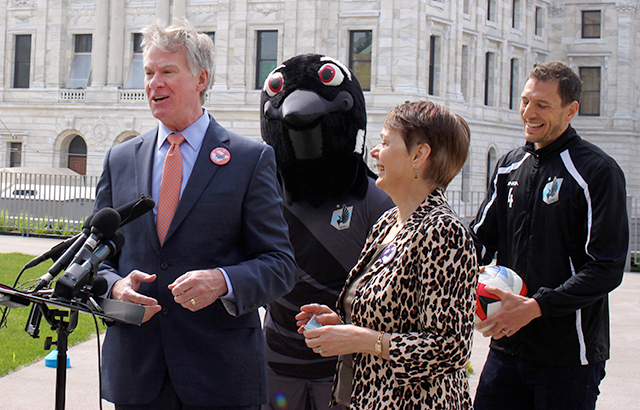 Lead owner Bill McGuire has pledged that the team will pay all construction costs — estimated at between $150 million and $200 million — and will pay $557,000 in rent on the land to the city, which will pass it on to the Met Council. The city has agreed to pay for up to $18.4 million in infrastructure projects around the stadium site.

If the legislative pieces are signed, the team owners and Major League Soccer will have decisions to make. The official awarding of the franchise was contingent on a stadium plan. When that new franchise will begin play has not been announced yet, but the team and league have already scouted temporary locations for the 2017 season.

One venue that will not be the temporary location if the team plays in 2017 is the National Sports Center in Blaine, where the lower-division Minnesota United plays its North American Soccer League schedule. Instead, Target Field or TCF Stadium are being considered.

If Dayton signs the bills, construction of the new stadium could begin sometime over this summer and be ready in time for the March kickoff of the 2018 MLS season.