In late April, when delegates to the DFL’s 2nd Congressional District convention showed up in a Shakopee Junior High to endorse Angie Craig as their candidate for the U.S. House of Representatives, they were greeted at the front door by a huge banner.

The sign wasn’t for Craig, though. “Lori Swanson, results that touch lives,” it read. The banner included a picture of Swanson with her golden retriever. And then, standing under the banner was the dog, Taffy, right there in the fur, getting a little head pat from most of the entering delegates.

Swanson, who has recently made headlines for bringing high-profile actions against for-profit colleges such as Globe University, proceeded to give a Bernie Sanders-like speech to the delegates, talking about “the slide of real income’’ for working Minnesotans, the evils of Wall Street, the curse of money in politics, the skyrocketing costs of college. She was greeted by a big applause.

That wasn’t the case when Smith, who might be considered the most-watched potential gubernatorial candidate in the state, gave her speech. Then again, Smith also didn’t bring her dog.

Smith has done just about everything else, though. In fact, Minnesota’s never had a lieutenant governor like Tina Smith. She’s been televised going underground to check a sewage system in Dennison; catching a walleye on Lake Vermillion; touring factories and farmyards from one end of the state to the other; and — perhaps most importantly — constantly meeting with (and in photographs with) her boss, Gov. Mark Dayton.

This  ever-growing profile is not an accident. Before she agreed to run with Dayton, Smith met with Walter Mondale, who transformed the historically obscure job of vice president into meaningful role under President Jimmy Carter. Back then, Mondale told Smith, he had prepared memos for Carter on what could be done to make the VP useful, and discussed his thoughts with Carter. Smith followed the same steps with Dayton. 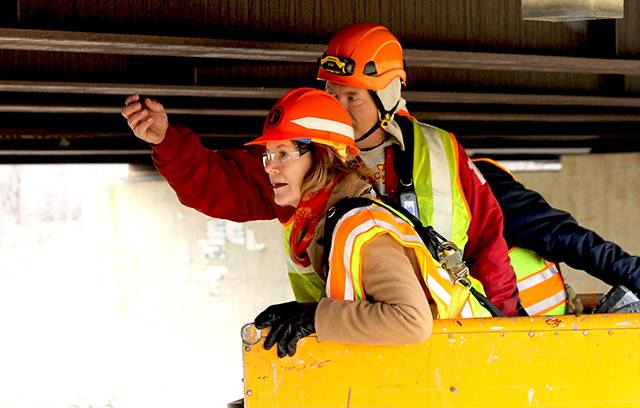 Office of the Governor
Lt. Gov. Tina Smith taking part in a MnDOT Bridge Inspection in Rochester on Dec. 15, 2015.

The blueprint has created an entirely new kind of lieutenant governor. Unlike previous holders of the office, Smith actually has real responsibilities, as well as what seems to be the respect and loyalty of her boss, Dayton.

But it has also created speculation that the governor is creating a platform for his lieutenant to run for governor in 2018, to lock up the DFL nomination before the process has really even started.

It’s worth noting just how unusual it is that Smith has such significant responsibility  — and power — in the Dayton administration. Historically, lieutenant governors were brought on to bring some sort of balance to a ticket. And then to disappear.

In the early 1980s, for example, Democrat Rudy Perpich showed his progressive side by putting Marlene Johnson on the ticket, the first woman to have that job. But as the years went by, Johnson’s role grew so small that you needed an electron microscope to find it.

Arne Carlson, for both personal and political reasons, went through two lieutenant governors,  with Joanell Dyrstad followed by Joanne Benson, who was briefly considered to be the GOP’s likely gubernatorial candidate to succeed Carlson in 1998. That didn’t work out so well for Benson — or for the GOP. St. Paul Mayor Norm Coleman got the endorsement, and the Independent Party’s Jesse Ventura ended up as governor.

Ventura, not surprisingly, had the state’s most unusual lieutenant governor. Mae Schunk was supposed to be some sort of a decent every-person. Yet if she ever participated in any important decision during the Ventura administration, it remains a state secret. Her main job appeared to be going around Minnesota reading books to small children.

Then there was Tim Pawlenty’s lieutenant, Carol Molnau. She thought so little of the job that she also wanted to be the commissioner of the Department of Transportation. A collapsed bridge and a few MnDOT scandals later, it was decided Molnau should return to the obscurity of just being lieutenant governor.

During his first term, Dayton stayed true to tradition. He selected Yvonne Prettner Solon, who apparently hadn’t realized the job was to be occasionally seen but almost never heard. She soon decided one term was enough (though nobody from the governor’s office was begging her to run again).

Under Smith, everything’s different. She is in the end-of-session negotiating meetings that Prettner Solon was never involved in. She communicates with Dayton daily — and constantly; Prettner Solon said that she and the governor seldom talked.

Smith points out that she stepped into the job with an entirely different relationship with the governor than previous lieutenant governors typically have had. As Dayton’s chief of staff during his first term, she and the governor developed a tight, trusting relationship.

“Often, people have picked their lieutenant governors to further their chances of winning an election,’’ Smith said. “He picked me because he knew I would be a strong campaigner, but also a strong advocate.’’ 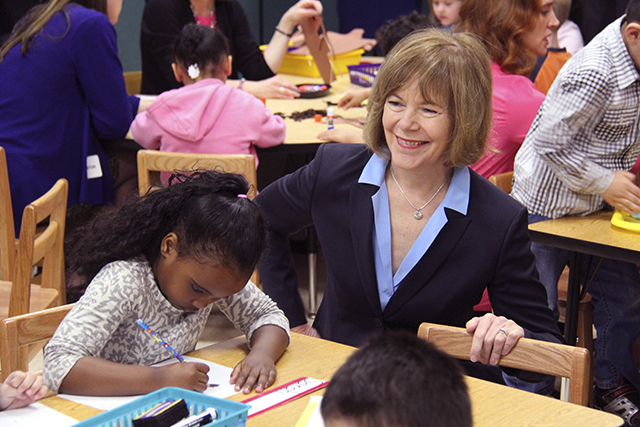 The job, she said, has evolved in the way she and Dayton, with a tip of the cap from Mondale, believed it could.  “What’s happened is the natural fulfillment of our agreement to make this a meaningful job,’’ Smith said.

The agreement essentially comes down to this: She would be an ambassador around the state for the governor and his agenda and also be the governor’s “eyes and ears” to what Minnesotans were saying about state government.

At one level, the way Smith and Dayton work — as partners, sharing a staff — has stripped  all independence from the job. For example, one of Prettner Solon’s complaints about the office was that virtually everything she touched went through the governor’s staff. If a reporter wanted to interview Prettner Solon, the request would go through the media office of the governor. Big brother was always watching.

But Smith and Dayton say that such continuity is a strength, not a weakness. Smith calls the setup an “integrated system,” in which they meet constantly and she participates in virtually all meetings. And Dayton, all players agree, actually turns to his lieutenant governor for input.

Does all of this mean Dayton is hoping to make Smith a shoo-in to be the DFL candidate for governor in 2018? “Absolutely not,’’ Smith says. In fact, the one thing the two don’t talk about is her succeeding him: “We never talk about that.’’

Smith does say that her own thoughts occasionally drift “to two years from now,’’ but she thinks it’s absurd to ponder what the political climate will be in 2018.

It’s also clear that other potential candidates are not going to roll over for Smith. Swanson isn’t the only one already laying the groundwork for a run. In fact, she’s just one of a number of women in both parties who seem to be ready to break through the state’s gubernatorial glass ceiling (a list that includes not only includes Swanson, Smith, Murphy, and Otto in the DFL, but also state Rep. Jenifer Loon and state Sen. Karin Housley on the GOP side of the aisle.)

But between now and then we will have lived through two years of either Hillary Clinton or Donald Trump, economic swings, droughts, floods and potholes. “In politics and life, timing is everything,’’ said Smith.  But she added “the last thing on the minds of Minnesotans’’ is the elections of 2018.

Probably true. But it’s also worthwhile to know that Dayton’s political mentor was Perpich, who understood that one of his great strengths was that he had been everywhere in Minnesota — that his picture had been taken with thousands of Minnesotans. Smith has two years left in office, and yet she’s already been to places Perpich had never gone — like into a sewer system in Dennison.

Why there has never been a lieutenant governor like Tina Smith