On a recent Wednesday, Jaime Tincher played one of her favorite games with a group of state government interns: guess my biography.

Sitting in a large circle, one intern hypothesized that Tincher, the chief of staff to Minnesota Gov. Mark Dayton, grew up in the state, or at least somewhere in the Midwest. Another figured she probably went to Macalester College in St. Paul and got a master’s degree in public policy. She looked like a tennis player and dog person, another thought.

The interns didn’t pick up on Tincher’s faint West Virginian accent, where she grew up in a coal mining family. Nor did they know that before getting into politics she worked at a chemical processing facility in Louisiana and as a promotions manager at a classic rock radio station.

It’s not the typical background for someone serving in one of the most prominent jobs in state government, a role that includes helping manage two dozen commissioners (who oversee 34,000 state employees) and deciding what information reaches Dayton and Lt. Gov. Tina Smith’s ears each day.

But Tincher, 39, is more than just a manager — she also serves as one of the governor’s top strategists, going in and out of negotiations with legislative leaders during the final days of the contentious 2016 session as a stand-in for the governor. It’s a role that requires Tincher to balance her astute political instincts with the interests of her boss  — and the entire state of Minnesota, a task that’s not always easy in St. Paul.

Born in Charleston, West Virginia, the granddaughter of coal miners, Tincher didn’t have big political aspirations growing up: She wanted to get out of the state and travel the world. In her junior year at Denison University in Ohio, she traveled to Mexico to study the interactions between the government and the Zapatistas, a revolutionary group pushing for social reforms. From there she went to graduate school in Vermont at the School for International Training, where she studied conflict resolution.

“I had plans of being in the Peace Corps or something,” Tincher said. “I had always thought that conflict and war zones — that’s where I was going to be.”

Right out of undergrad, she bounced around with a series of odd jobs, including her stint as a promotions manager at a classic rock radio station in West Virginia. It was an odd first job for someone with international travel in mind, but Tincher said the experience helped hone her negotiating skills. “I learned a lot working on commission with WWF and rock promoters,” she said. “It takes a certain skill to be like, ‘I’m not going to let you play me.’”

She didn’t get into politics until the early 2000s, and then it was at the urging of her grad-school roommate, who told her she’d be better off staying in America and trying to fix the political system here.

Her first job in politics was with America Coming Together, the George Soros-funded group that campaigned in battleground states against George W. Bush. Tincher had taken a few website-building classes in the mid 1990s — the start of the Internet era — which led the campaign to push her toward the unglamorous but critical job of collecting and analyzing field and poll data, work that led to similar campaign jobs across the south.

Then, in 2006, she got a call to work on the Democratic campaign of a promising Senate hopeful — Hennepin County Attorney Amy Klobuchar. Tincher had never met a Minnesotan before. “I remember thinking in my head, ‘OK, that’s the one above Iowa,” Tincher said. “I knew the things that people who are not from Minnesota know about Minnesota, you know like Babe the Blue Ox and ‘A Prairie Home Companion.’”

From campaigner to staffer

Tincher figured her job on the Senate campaign would be like the others. After Klobuchar’s win over Mark Kennedy, she would pack up and move on to the next battleground state, the next campaign.

But after Klobuchar’s big win, the Democratic Farmer Labor Party pulled her in to do more data work. In 2007, she built the state party’s voter file; the following year, she helped campaign for Barack Obama. By the time the 2010 campaign cycle came around, she was a rising star. The then-Speaker of the Minnesota House, Margaret Anderson Kelliher, approached Tincher about helping her mounting a bid for governor.

“I didn’t know her back then, but I was aware of her because she was the data queen of the DFL,” Kelliher said. “She really has a skill around the quantitative side of things. That struck me right away.” 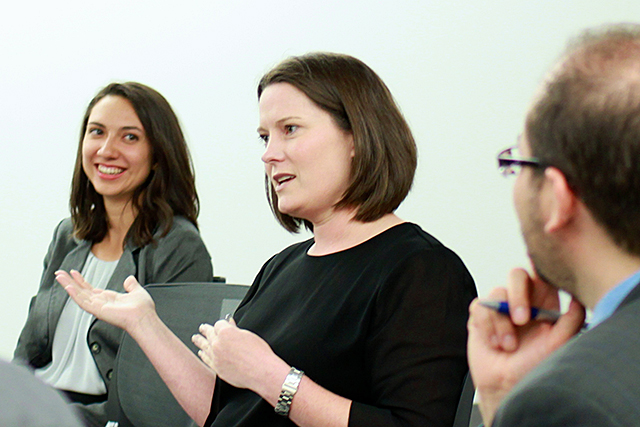 Tincher joined Kelliher’s team as campaign manager. After a five-way DFL endorsement contest, Kelliher emerged the first woman ever endorsed for governor by a major political party in Minnesota. But she still had to face Democratic challengers in a primary, including Dayton, who had come back to Minnesota after a single, unhappy term in the U.S. Senate. (Tincher was part of the team that blocked Dayton from entering the floor of the DFL endorsing convention because he wasn’t seeking the party’s backing.)

In the primary, Dayton beat Kelliher by less than 7,000 votes. It was a tough loss for Tincher and her team, but Dayton soon invited her to move over to his campaign to run get-out-the-vote (GOTV) operations. After taking some time to process the loss, Tincher accepted. “That told me a lot about her character and her integrity,” Dayton said.

Tincher had a similar reaction to Dayton’s invitation. She thought it said a lot about the man who would later become governor and her boss. “There are not a lot of politicians who would say, ‘Oh yeah, the woman who literally ran the campaign against me, I’ll let her come over and run GOTV for me,” she said. “If you’re talented and smart and a good person, he wants you around him.”

Dayton won the election that fall, but Tincher didn’t go to work in his office, at least not right away. Instead, she went to work for the House DFL to oversee its role in redistricting, the process of creating all-new political maps that happens once every decade. In 2012, though, Dayton’s legislative liaison, Michele Kelm-Helgen, left her job to serve on the Minnesota Sports Facilities Authority, the board overseeing construction of the new Minnesota Vikings stadium, and Tincher took her place in Dayton’s office. Over the next two years, she represented the governor on everything from gay marriage to an increase in the state’s minimum wage.

As the 2014 campaign approached, Dayton needed a new lieutenant governor candidate. He recruited his then-chief of staff, Tina Smith, for the job — a move that left a conspicuous vacancy in the governor’s staff.

Tincher, said Dayton, was the natural choice. “I’m just amazed at the number of projects she can manage simultaneously,” Dayton said. “And of course, in that job, everything is coming at you from everybody every which way.”

There’s no typical day in the life of Dayton’s chief of staff, but it usually includes several check-ins with the governor and senior staff across state government. Those meetings are Tincher’s way of getting updates from all 26 of commissioners about what’s on their plate or their legislative priorities. She has to act as traffic cop, too, green-lighting certain ideas or prioritizing what information gets in front of the governor each day.

Tincher’s style tends to be all business. If meetings start to run on too long, she makes everyone stand up. She’s also adept at employing the tactics she learned during her time studying conflict resolution. “Sometimes we disagree with the lieutenant governor and governor, but [Jaime] sits us down and says this is what the governor wants and how can we get everyone on the same page,” said Myron Frans, Dayton’s commissioner of Minnesota Management and Budget. “And then there’s her capacity to keep track of all these things. There are the big items, but there are all these little dollar amounts and policy issues that she is able to keep in the back of her mind. She represents the governor and agencies well.” 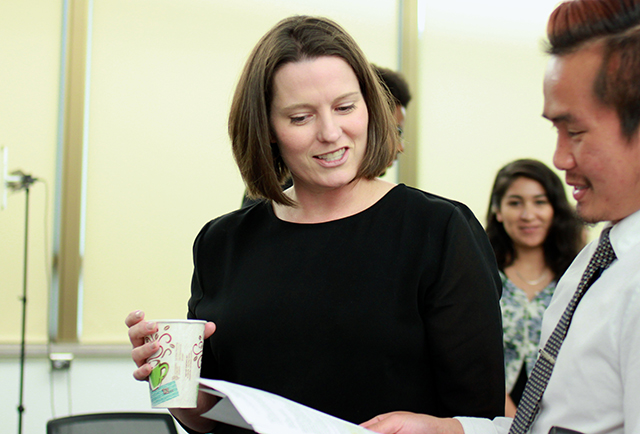 MinnPost photo by Briana Bierschbach
Jaime Tincher: “I had plans of being in the Peace Corps or something. I had always thought that conflict and war zones — that’s where I was going to be.”

“Or it’s ebola or it’s the avian flu or some other problem,” she said. “Some drama happens that day that you could have never expected.” To handle the fires, Tincher has designed her days to include a block of time, usually two hours, where she can simply respond to questions from commissioners or the governor on a breaking development.

There are, of course, challenges that go beyond the obvious. A year ago, a Star Tribune story included an accusation that Tincher sought political payback against a lobbyist and former Republican house legislator by blocking $2 million earmarked for broadband infrastructure in Annandale, Minnesota.

Tincher said opposition to the earmarks were based purely on policy, not politics, but she admits to getting frustrated with state legislators during negotiations. And after working for campaigns all those years, she says, it’s sometimes hard for her to shake her instincts. She tries to take a cue from her boss, Dayton, who doesn’t look at negotiations as a “winner takes all” scenario.

“Sometimes I remind myself, I’m not being very much of a peacemaker,” she said. “For me, campaigns are very much, there’s a winner and a loser and either you’re going to be the winner or the loser. Sometimes in policymaking, winning is not getting everything you want. It’s giving a little bit so you are moving the ball for people who it matters to.”

At the end of her meeting with the interns, someone asked Tincher what her biggest project is these days.

Negotiations with legislators over a possible special session, such as they are, are certainly on Tincher’s mind. But it’s not her top priority. That designation is reserved for the task of diversifying the ranks of the 34,000 people working in state government.

Currently, about 11 percent of the state’s workforce come from communities of color. Tincher’s goal is to double that number by January 2019, when Dayton officially leaves office. That has meant the hiring of a chief inclusion officer, James Burroughs, and organizing an independent audit of how the Dayton administration has done over the last five years in creating opportunities for people of color.

The state has hired a firm to do the audit, but it will nevertheless involve a lot of work for the administration, involving collecting a lot of data across many agencies. Tincher is working with the firm to try to get the work done as early as January, when the next Legislature convenes.

For Tincher, it’s a quality of life issue, something that’s become increasingly important to her as she raises her 4-year-old son and 2-year-old daughter in Minnesota (she’s married to Adam Duininck, chair of the Metropolitan Council).

“If we don’t figure that piece out and we aren’t a place where people want to immigrate to we are just not going to sustain the quality of life that we have right now,” she said. “In state government we have 34,000 employees and we touch every aspect of life in Minnesota. We can be a very positive driving part of that.”