For Gov. Mark Dayton, a year really does make a difference.

In June of 2015, the second-term Democrat was negotiating a special session with legislative leaders, who teamed up at the end of session to pass a $40 billion-plus budget bill. Dayton felt cut out of that last-minute deal, and he didn’t like that one of his key priorities, preschool education funding, wasn’t included in the agreement. After he vetoed several budget bills, he called a one-day special session to resolve the differences, only to see his preschool proposal pushed aside once again to get a deal.

On Wednesday, just one year later, Dayton stood at a podium in front of reporters and laid out a long list of demands that lawmakers must meet for him consider calling the Legislature back to St. Paul. And this time, it’s lawmakers who are desperate for the special session.

Among those requirements: $182 million more in public works projects of his choosing; $75 million in additional spending out of a state budget surplus over the next year; new deductions and technical fixes to a tax bill; and funding for transit projects in the metro area. If lawmakers don’t agree, Dayton said, then there might not be a special session.

The power play is a dramatic turn from what Dayton has experienced in the past with the current Republican-controlled House and DFL-led Senate. In addition to feeling cut out of last-minute budget negotiations in 2015, Dayton was repeatedly rebuffed by legislative leaders when he called for numerous special sessions over the last year, on everything from a walleye shortage at Lake Mille Lacs to extending unemployment benefits for miners.

Now it’s lawmakers who want a special session, after a $1 billion bonding bill and a $275 million one-time transportation-funding package fell apart in the final minutes of session. All 201 legislative seats are on the ballot this fall, and transportation and infrastructure improvements were high on their list of things incumbents wanted to be able to take back to voters. Dayton isn’t running this year, or ever again, but only he has the power to call them back.

Dayton’s list of demands is long, and essentially re-opens most of the major issues that were debated all session long. Among his requirements:

He’s also appointed Lt. Gov. Tina Smith to try and re-open the discussion on a long-term transportation funding deal, saying it must include some kind of funding mechanism to allow local governments to raise the funding needed for transit projects, including the controversial Southwest Light Rail line.

It was transit that led to the unraveling of a bonding and transportation deal in the final moments of session, with Senate Democrats adding a proposal after leaders said they agreed to give Hennepin County the authority to raise local funds to pay for such projects. House Republicans said there was no such agreement, and with minutes to spare, adjourned the House instead of taking final action on the amended bill.

“These are my requirements,” Dayton said. “Not to satisfy me, but for the needs of Minnesota.”

Those requirements come on top of some key Dayton victories in a $182 million budget bill passed this year, which he signed Wednesday morning, including $35 million in funding for racial disparities and expanding broadband in Greater Minnesota, two key priorities for the governor. Also tucked inside the 599-page bill: $25 million for Dayton’s signature priority, a statewide voluntary preschool proposal — the same one lawmakers pushed back on just a year ago.

Standing outside the State Office Building after Dayton laid out his demands, Republican House Speaker Kurt Daudt said he can agree to take care of Dayton’s concerns in the tax bill. Dayton has until Monday to sign or veto the proposal, otherwise it will be automatically vetoed.

Daudt struck a cordial tone in his comments when it came to Dayton’s other demands, careful not to be too critical or specific. “We need to do more research on those items,” Daudt said.

Many Republican legislators, including Daudt, have been traveling around the state in the days since the session ended to try and put pressure on the governor to call a special session. But Daudt said he’s worried the level of new spending in Dayton’s demands would land “like a lead balloon” with House Republicans. 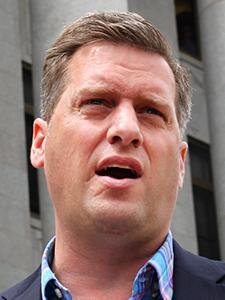 “That’s part of negotiations, right?” Daudt said. “I’m not drawing any lines in the sand to say, ‘we will’ or ‘will not.’”

There’s risk for Dayton, too. While only the governor can call lawmakers into a special session, only those legislators can decide when they are finished. To keep the agenda from spiraling out of control, Dayton said he’ll need a signed agreement from leaders of all four legislative caucuses on the parameters of a likely one-day special session. Just last year, rank-and-file lawmakers moved to amend budget bills during the June special session — against an agreement leaders struck with Dayton — and the whole thing nearly unraveled.

There’s also the chance Dayton’s long list of demands could turn some legislators off to doing a special session at all, or at least to doing anything other than fixing the tax bill. Daudt said he hoped the governor was willing to be “reasonable” and negotiate the items his list, but Senate Republican Minority Leader David Hann said Dayton’s requirements are a non-starter for his caucus.

“I cannot agree to your multi-page list of non-negotiable spending demands,” Hann said in a letter. “This can only be interpreted as an attempt to scuttle the compromises reached by the legislature on major bills passed this session.”

For their part, Democrats seem mostly supportive. House Minority Leader Paul Thissen said he could put his signature on an agreement that included the items on Dayton’s list, and Senate Majority Leader Tom Bakk said many of the priorities are “ones shared by DFL senators.”

“I am glad the Speaker is willing to resolve the outstanding issues with the tax bill,” Bakk said. “And [I] hope this sets a good tone for special session negotiations.”

Dayton in the driver’s seat