Gov. Mark Dayton signed a $182 million budget bill on Wednesday that was passed in the final hours of the 2016 legislative session, but he’s withholding his signature on a package of tax cuts, asking lawmakers to fix a major drafting error in the bill in a possible one-day special session of the Legislature.

The DFL governor laid out his requirements to fix the tax bill and several other conditions [PDF] legislative leaders must agree to if Dayton is to call a special session, provisions that include $182 million in additional bonding projects, more than $75 million in new budget spending and funding for mass transit projects in the metro area.

Legislators have wanted the governor to call a special session since a $1 billion bonding bill and a deal to fund a one-time package of transportation projects fell apart in the final moments of session. Part of the problem was a lack of funding for transit in the proposal, which led Senate Democrats to amend the bill in the final minutes of session. That confusion led the House to adjourn session minutes before the chamber’s deadline — without taking any action on the bill.

The error in the tax bill comes down to a single word — “and” instead of “or” — related to the way taxes are collected on paper pull-tabs in bingo halls. Using the word “or” includes places that just sell pull-tabs under a broader definition of a bingo hall. The mistake would put a huge hole in the state’s budget and part of its contribution to the Vikings stadium over the next three years, Dayton said.

“I’m not going to sign the bill as it is now because of this $101 million error,” Dayton said.

If there’s a special session, Dayton also wants lawmakers to include a permanent tax exemption for the Minnesota State High School League in the bill, as a current exemption is about to expire.

Republican House Speaker Kurt Daudt said he agrees with the governor’s proposed changes to the tax bill, and that the one-word mistake was drafted in error in the final nights of session. Daudt said he’s willing to discuss a special session to take care of the errors, or to talk about a broader special session that would include both a tax bill and pick up the pieces of transportation, bonding and other budget items.

“We were in agreement with the two things that he had concerns about in the tax bill,” Daudt said, adding that he hopes the governor could sign the proposal after the errors are corrected. “Once he’s done that, we are happy to visit with him about the other provisions in his bill.”

Dayton has until Monday to either sign or veto the tax bill. If he choses not to sign the bill, it will simply get a so-called pocket veto, which happens when a governor doesn’t take action on a proposal at the end of a two-year lawmaking cycle. 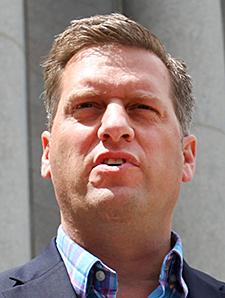 The governor has also appointed Lt. Gov. Tina Smith to pick up the discussions on a long-term transportation plan with legislators. Dayton said he’s “very reluctantly” open to the one-term plan lawmakers agreed to in the final hours of session, but he’d prefer a long-term deal that puts $600 million into roads and bridges over the next decade.

He’s also wary of the way lawmakers earmarked certain projects to get transportation funding, and he will insist on some mechanism to allow metro-area counties to raise the money needed to pay for public transit projects, including the controversial Southwest Light Rail Line.

“Just give the Metropolitan Council the ability through local government taxation to raise the revenues,” Dayton said. “So that wouldn’t have to be state money going into [transit projects].”

“They all need to be in there,” Dayton said. “That’s my position.”

Daudt said Dayton’s additional spending proposals will likely land “like a lead balloon” in the House Republican caucus, but he doesn’t want to take any items off the table in early special-session negotiations. House Democrats released a statement saying they agree to Dayton’s terms.

As to how long a special session could last, Dayton replied: “One day is plenty.”