Average daily ridership on the Green Line is 37,402, well on its way to the 41,000 daily trips forecast for the year 2030. Investment along the line, which connects downtown St. Paul with downtown Minneapolis, has totaled $4.2 billion, according to Metro Transit estimates. And market-rate housing projects have sprouted all along the route, even as 3,600 units of affordable housing have been created or preserved.

As such, praising the $1 billion Green Line is a sure-fire applause line for politicians in both the east and west metro.

Back then, there were signs in businesses along University Avenue that read “Blight Rail.” Others said “Save Our Jobs” and “Save Our Businesses.” The Met Council faced civil rights lawsuits. Major local institutions such as the University of Minnesota and Minnesota Public Radio fought the route, claiming vibrations from train operations would interfere with scientific and broadcasting equipment.

Those advocating for the project had a choice. One of the possible responses — fighting back — was the route not taken. Instead, a well-organized and well-funded campaign was launched to listen to the concerns — and then do something to lessen their impact.

Out of that was born what was called the Central Corridor Funders Collaborative, an unusual effort in which 14 private foundations — groups far more comfortable acting alone — got together to respond to threats to affordable housing, businesses and low-income and minority communities.

The $12 million pledged by the collaborative wasn’t the most spent to mitigate the negative impacts of the line — government and other nonprofits spent far more. But the collaborative helped create the process for having the people impacted by the Green Line play a large role in decision making. 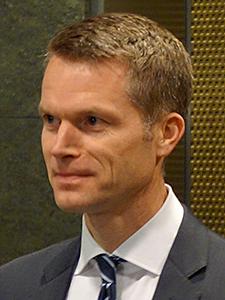 “The collaborative was a small investor, a fractional investor, but it helped align city resources, nonprofits’ energy and resources,” said Sage-Martinson, who served as the director of the Central Corridor Funders Collaborative from 2008 to 2014. “Having what we called joint action strategies made a big difference and helped people tackle a big issue together.

“One of the successes of the funders collaborative is the trust and the risks folks took in those early years when there was a lot of tension,” he said. “This wild idea to bring people together to tackle big issues hadn’t been proven locally.”

“It seems easier to me today looking back than it did those first two or three years.”

On June 17, the collaborative held a party of sorts: to celebrate, to look back and to formally end operations. (Its website already refers to the funders collaborative in the past tense). In its eight years years of existence, 2008-2016, it gave out $12 million in more than 162 different grants for efforts to address affordable housing; small business support; job training and placement; green space and gardens; and the arts.

Among those grants was money for developing and carrying out affordable housing policies and to help to create programs to help small businesses in various ways. Funder money also went to help create a number of arts and culture amenities; and to help form the “trusted advocate model” to make sure people ethnic minority residents and those with limited English were heard during public processes. (Disclosure: MinnPost received Central Corridor Funders Collaborative grants totaling $90,000 between 2009 and 2015 to fund Cityscape, a column focusing on urban life in the Twin Cities.)

At the June “Final Stakeholder Event” at Minneapolis’ Southern Theater, St. Paul Mayor Chris Coleman listed the things people can do now that they couldn’t do before the advent of the collaborative and the completion of the Green Line. One was to live in an affordable apartment at Hamline and University. Another was to “drink Surly Beer until you get sick — sorry Summit.”

And in a jibe at some who opposed the line’s route, Coleman said, “You can still listen to MPR. You can still go to the University of Minnesota.” 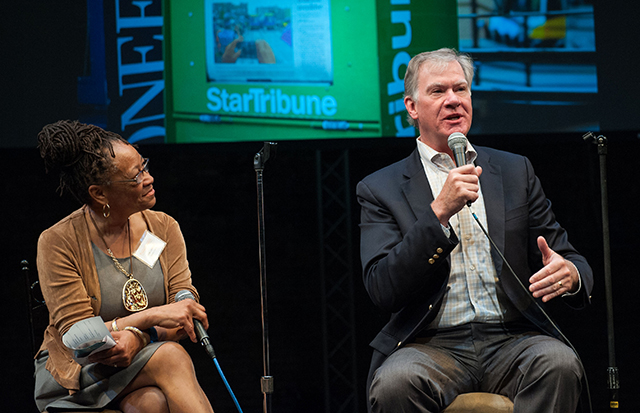 Patrick Troska, executive director of the Jay and Rose Phillips Family Foundation, said the set-up of the collaborative was unusual — many foundations offering money without as much control as they usually like. “Philanthropy tends to want to lead, it wants to take charge,” he said. “Ultimately what we did was bring the resources in and get the heck out of the way. We let the community lead.”

Nancy Homans, Coleman’s policy director, echoed the sentiment. “Sharing power wasn’t an abstraction, it was very real,” she said. “There were no barriers to entry. If you had an idea or a concern  or a question or a critique or a complaint, you were welcome to the table. At the end of the day, no one owned that table because it belonged to all of us.”

The funders collaborative set goals for what it wanted to accomplish during its life and contracted with Wilder Research to measure success — and failure. One goal of the collaborative’s Big Picture Project working group was to preserve or create 2,540 affordable housing units along the line by 2020, with a “stretch” goal of getting to 4,500. Nearly 3,600 units have been saved or built.

Yet Peter Mathison, research associate for Wilder, said median rents have been going up. “That’s something we definitely want to monitor going forward,” he said. The mix of businesses along the alignment has remained constant, though there has been a slight decline in small businesses — especially in the downtown areas of both cities — and a slight growth in medium-sized businesses.

There has been 3 percent job growth along and near the Green Line (which is slower than the region as a whole) and residential density and population has increased. A total of 107,628 people now live near the route, an increase of 13 percent since 2009.

Wilder reports that the demographics of the corridor differ from the rest of the Twin Cities in key ways. It is home to a higher percentage of low-income people: 18 percent earn less than $10,000 a year, while another 26 percent earn less than $30,000. Median household income in the corridor is nearly $8,000 lower than the cities of Minneapolis and St. Paul as a whole. The corridor is also more racially diverse than the two cities taken together — and has a higher percentage of people without cars, making it more transit dependent than the cities’ population.

Much of the suspicion about the project — and over the assurances from government that it would benefit the surrounding neighborhoods — was based on memories of another massive transportation project: Interstate 94.

In the 1960s, that project cut a massive swath through St. Paul’s African-American community of Rondo, displacing thousands of residents and businesses and physically dividing the rest.

The initial station alignment for the Green Line didn’t help matters. Some in the neighborhoods pointed to the fact that the route didn’t include stops at Victoria Street or at Western and Hamline Avenues, which was seen as evidence that the line wasn’t going to benefit the same communities that suffered from the construction of I-94.

Under federal rules at the time, however, adding those stops would have hurt the project’s chances of securing federal money for the line. After lobbying from the city and Met Council — at the urging of residents and businesses who had formed the Stop For Us coalition — the feds changed change their rules, which allowed the stations to be added to the route.

“The addition of the three stops on the Green Line … has given our community hope that we can work with government for a common problem,” Marvin “Roger” Anderson, co-founder of Rondo Avenue, Inc., said in a video presented at the June event.  “Without those three stations, the Green Line would not have been as beneficial to our community.”

Coleman said his favorite memory of the entire process was on opening day, standing on the platform at Victoria Street with Anderson and other sons of Rondo. “We celebrated together, that we had built a transportation system and we had built a community that works for all and was for all,” Coleman said. 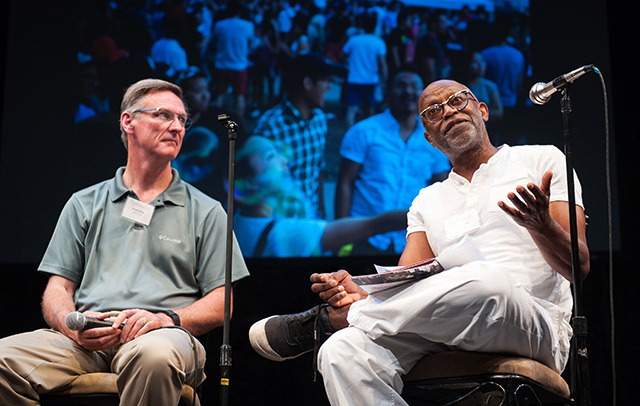 Ramsey County Commissioner Toni Carter recalled how she boarded the train that day with her father-in-law, Melvin Carter, Sr. “He was was one of the original members of the Rondo neighborhood who suffered through the tragedy of urban renewal,” she said. “Thank you Mayor Coleman for believing that we had to make certain this was a project to benefit and enhance the people who live along the line today.”

Seitu Jones is an artist in Frogtown who in 2014 organized The Community Meal, where 2,000 people dined on tables that stretched for a half-mile on Victoria Street. He complimented the people and the organizations that made sure that development took place all along the line, including in his neighborhood — even after private consultants had suggested development there would lag. “This community that was devastated by [Interstate] 94 is resilient and creative,” he said.

That development work continues, with projects such as Eight Bridges of Rondo and even a proposed lid over a large swath of the I-94 cut, all aimed at reconnecting the long-separated Rondo neighborhoods.

Was there a political aspect to the formation of the funders collaborative? If critics hadn’t been listened to and responded to, after all, they might have been successful in delaying or even halting construction. And both St. Paul and regional leaders wanted it built.

Sage-Martinson said while that might have been true, he said foundation leaders who created the Central Corridor Funders Collaborative and hired him to run it saw both the promise and peril of the Green Line. “They saw a real promise, which excited them, about the possibility of transit serving the neighborhoods along the central corridor,” he said. “And they saw and were afraid of the negative aspects of gentrification and displacement in the neighborhood.

“How can we exaggerate and encourage the positives while diminishing and preventing against the perils?” they asked back then, he recalled. “That’s the spirit in which the funders collaborative was launched — we’re really excited, we’re a little scared. How do we match both those things?”