A rare thing in Minnesota politics happened in a St. Paul courtroom Thursday: all three branches of government collided.

The clash was over the matter of whether the Minnesota Legislature encroached on the state’s executive branch in the final hours of the 2015 legislative session, when legislators passed a law allowing Minnesota counties to bypass the state auditor in hiring private accounting firms to perform financial audits. At the time, Rebecca Otto, the DFL state auditor, said the move rendered her office — which conduct audits on most counties in the state — effectively null.

Otto has filed suit over the law, arguing it’s an unconstitutional violation of the separation of powers in state government. It’s the first time in 30 years the state has grappled with the question, one that has the potential to dramatically change the role of Minnesota’s state auditor.

As Joe Dixon, Otto’s attorney, said at the hearing before Ramsey County Judge Lezlie Marek: “This case presents one of the most serious affronts to the balance of power in the history of the state.”

There’s some precedent for Otto’s case. In 1985, legislators passed a law that transferred most of the responsibilities of the state treasurer, then a constitutional officer, to the Commissioner of Finance.

Minnesota’s treasurer at the time, Robert Mattson, challenged the law as unconstitutional because it effectively abolished the duties of his office. The Minnesota Supreme Court sided with Mattson in that case, a ruling that’s now the foundation of Otto’s argument.

The role of the state auditor has existed since before statehood, but it wasn’t always the job of the auditor to examine the books of the counties. That changed in 1972, when legislators directed the office to take on the task.

Dixon also argued the law violates the single subject rule in Minnesota, which is supposed to stop unrelated law changes from being tucked inside so-called omnibus bills. The change to the auditor’s office, which has been brewing in St. Paul for several years, was tacked on to a state government finance bill. “If this doesn’t constitute a violation of single subject, I don’t know what does,” Dixon said.

Otto filed the lawsuit in February against the state of Minnesota, as well Becker, Ramsey and Wright counties. The state was later dropped as a defendant to the lawsuit, leaving the counties as the ones to defend the change made by the Legislature. 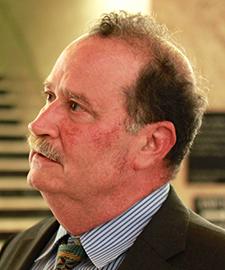 Scott Anderson, an attorney representing Wright and Becker counties, argued lawmakers are allowed to move some duties of executive officers, just not core functions. That’s how the state auditor took over county audits in the first place, back in the 1970s — through a legislative change. And the office of the state auditor has many duties besides performing financial audits of counties, including auditing smaller local government entities, firefighter pensions and any organization using federal funds.

“Otto could audit other entities, but because she chooses to focus on counties, it makes it a core function?” he asked.

Anderson also said Otto has overblown the potential impact to her office, as some counties, like Hennepin, are already specifically allowed to use outside auditors — and do. “It does not really change in any meaningful way of what’s been done by the state auditor for the last 13 years.”

Ramsey County Judge Lezlie Marek has a big decision and a short timeline ahead of her. By Aug. 1, counties need to let Otto’s office know whether or not they plan use private firms for the 2018 auditing year, which would cover most of 2017.

Marek dismissed a request from the counties not to take up the case at all, and has moved quickly on the case so far. Most expect her to rule before the changes go into effect.

“We’re bound by timelines in statute right now that we have to respond to, and until this case is decided we’re not exactly sure what we are responsible to do,” said Julie Ring, executive director of the Association of Minnesota Counties, who attended the hearing Thursday.

The case is Otto’s last option. After the law was passed last year, Gov. Mark Dayton tried to repeal it as part of a special session of the Legislature, but he couldn’t find enough support among lawmakers. Dayton, a former state auditor, filed an affidavit supporting Otto’s case. Anticipating lawmakers weren’t going to take up the issue in 2016, Otto filed her lawsuit in February, one month before the legislative session convened.

“I took an oath to defend the Minnesota Constitution, and that’s exactly what I’m doing with this lawsuit,” Otto said after the hearing. “Allowing the counties to choose their auditor is not only bad policy, it’s unconstitutional, and the taxpayers deserve better in this state….the founders understood the importance of independent oversight on behalf of the taxpayers to make our system work.”