If you are planning ahead for a trip to a Minnesota United game once the Major League Soccer team christens a planned stadium in St. Paul’s Midway area in 2018, don’t drive.

A just-released environmental assessment and traffic study predicts drivers who try to drive to and park near the proposed 20,000-seat soccer stadium will not only be unsuccessful — they will also add to game-day congestion, what with all that cruising for a space. Only about 750 on-site and nearby parking stalls are anticipated when the stadium opens in 2018.

At an estimated average of 2.7 fans per car, that’s only 2,100 fans who can arrive by car, or a bit more than 10 percent of the attendees.

The rest likely will need to use transit or a yet-to-be-developed park-and-ride system that will shuttle fans from off-site parking — perhaps at the state fair grounds or downtown St. Paul. The traffic study estimates that 6,200 fans will arrive on light rail, 700 on the new A Line bus rapid transit line and upwards of 9,000 on shuttles from remote parking. That means that nearly 80 percent of the new team’s fans are expected to arrive by those modes.

The final 10 percent are expected to walk (3 to 5 percent), bike (2 percent) take regular Metro Transit bus routes (1.5 percent) catch charter buses from outside the area (1 to 3 percent) or ride private shuttles (2 to 3 percent).

The environmental study (technically an Alternative Urban Areawide Review or AUAR) covers both the stadium site and the adjacent RK Midway shopping center. The assessment reviews the impacts of the short-term construction and operation of the stadium as well as the longer-term impacts of the full redevelopment of the shopping center. The long-term assessment uses 2035 as reference point, and not only includes commercial, retail and residential development at RK Midway but the projected expansion of the stadium from 20,000 to 25,500 fans.

The study did not report any roadblocks to either the stadium plan or the build-out of the redevelopment expected to occur over two decades.

“While there is a lot of detail in the report, the main take-away is that there is nothing in this analysis that says we can’t move forward with a soccer stadium as envisioned,” said St. Paul planning and economic development director Jonathan Sage-Martinson. In a statement released Monday morning, Sage-Martinson said there will be adequate parking and that traffic can be managed with existing infrastructure.

The city will host a public briefing and open house on the study Tuesday at 7 p.m. at Concordia University’s Buenger Education Center. City officials could approve plans and make clarifying changes to area zoning by August, with construction beginning after that. The hoped-for opening of the stadium is Spring 2018.

Of course, that timeline depends on the resolution of a standoff between Gov. Mark Dayton and Republicans who control the Minnesota House over the governor’s veto of a tax bill that contained a property tax break sought by the city and the team owners. 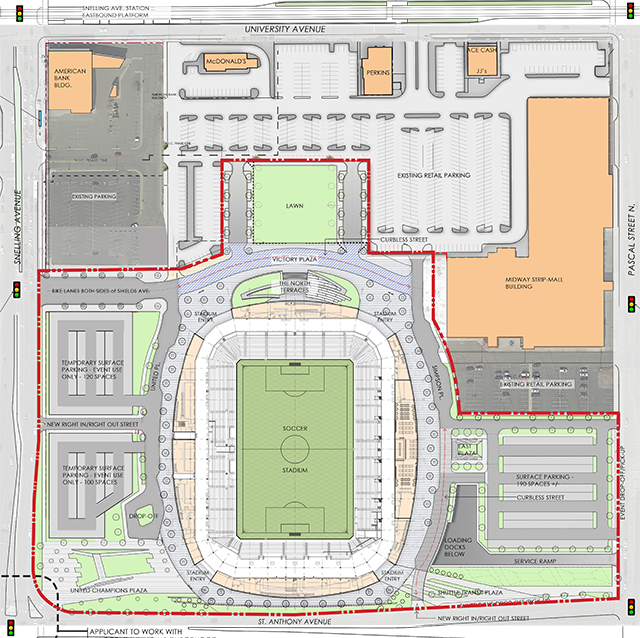 No roadblocks (environmentally at least)

The environmental impacts of both the stadium and the redevelopment of RK Midway are considered minimal, mostly because the site currently holds a strip mall surrounded by parking and a mostly abandoned vacant lot that, until 2001, held Metro Transit’s bus storage and maintenance facility.

More than 98 percent of the nearly 35 acre site is currently covered by buildings or pavement, the study reports. Once the plan is completed, more than 10 percent will be green space. There is no surface water on the site and no wetlands. The water table is 25-to-30 feet below the surface, and no endangered species are present.

The study anticipates that so many fans will ride light rail, bus rapid transit or shuttles to park and ride lots that planners will need to provide larger places for them to wait to board.

The study estimates that more than 2,050 fans at any time will be lining up to board westbound LRT trains and 1,700 for eastbound trains. According to federal standards, to accommodate that number of would-be riders there will need to be 16,500 square feet of queuing space (for riders heading to Minneapolis) and 13,750 square feet (for those heading toward downtown St. Paul).

The review does express concerns that the present location of shuttle bus loading — south of the stadium on St. Anthony — would put buses in conflict with what will be the most-congested post-game intersection in the area, at Snelling and Interstate 94. “Shuttle service along St. Anthony may need to be reconsidered because of this bottleneck.” 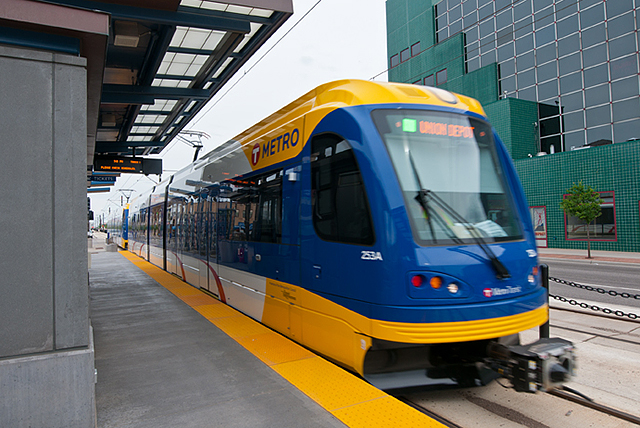 MinnPost photo by Bill Kelley
The study estimates that more than 2,050 fans at any time will be lining up to board westbound LRT trains and 1,700 for eastbound trains.

“The team should consider activities/concerts/etc. before and after match events to spread out arrival and departure times,” the study recommends.

The review also notes that weekend afternoon games — a common MLS start time — would bump up against the busiest traffic times for the neighboring shopping sites. It recommends that what it calls “capacity events” be held on weekend evenings.

Still a lot of cars

The study anticipates that many of the fans who ride light rail or bus rapid transit will use cars for part of their trip, parking elsewhere along the routes and using transit for the final leg. That’s why it suggests that soccer games not coincide with Vikings or Gopher football games, which would rely on some of the same parking ramps, or during the state fair.

A lack of on-site parking has been cited as a problem by some stadium critics. Either fans will be inconvenienced or neighbors will be forced to compete for on-street parking near their homes. But stadium backers, led by St. Paul Mayor Chris Coleman, have maintained that the transit systems near the stadium site will take up much of the load.

The study might underestimate the availability of parking nearby, though. While there are privately owned ramps near Snelling and University avenues, the study released Monday does not count any of that parking inventory. Private parking owners might be willing to rent spaces to fans, but they might not. The study identified 2,500 off-site parking spaces within one mile of the stadium.

And the city does not count on-street parking because it doesn’t want to encourage car-driving fans to park in the heavily single-family neighborhoods around the site.

The study worries that fans will still drive to the stadium in hopes of finding parking. To head off such optimism, the report states that “communication must be stated that if you do not have a reserved parking space for the event, then please take transit or shuttle buses….” It suggests that the close-in parking spaces should be sold with tickets.

Stadium backers have predicted that as the RK Midway site develops with apartments, commercial office towers and retail outlets, many buildings will include structured parking. But the study warns that traffic on the adjacent streets will make it difficult to exit that part of the site, potentially leading to wait times as long as two hours.  “Additional parking should be found away from the site and have good access to the other interchanges of I-94, not Snelling Avenue,” it states.

The study projects that current streets and intersections can accommodate vehicular traffic, but it also acknowledges that there will be congestions and backups as cars filter to arterials and I-94. The Snelling and University intersection is already one of the state’s most crowded — and complicated.

As the RK Midway site is completely redeveloped, traffic is expected to worsen unless changes are made to the streets. It recommends updating the traffic studies regularly as the area redevelops.

St. Paul soccer stadium study: don’t even think about driving to a game