At least everyone can agree on one thing: things aren’t going well.

If that could be considered a breakthrough in negotiations over a possible special session of the Minnesota Legislature, it was the only one that was apparent Tuesday afternoon, when the governor and top statehouse leaders emerged from yet another unproductive meeting.

After less than an hour at the meeting in St. Paul, Gov. Mark Dayton stepped out of the gathering, saying he was more discouraged than when he walked in. Things were going so poorly, he said, that he was leaving to go have lunch with Andy MacPhail, the baseball executive who also happens to be his stepbrother.

Not long after, Republican House Speaker Kurt Daudt, who walked into the meeting with an optimistic tone, left talks saying things were looking bleak for a special session. “We are obviously concerned that we are not making progress that the governor is not moving off his list of demands and that probably is going to make it difficult for us to get to an agreement for a special session.”

What’s on the table?

The lack of optimism is one of the only signs of movement in the four weeks since the Legislature’s regular session ended.

Back then, Republicans in the House and Democrats in the Senate agreed — just barely — to pass a $182 million budget bill; a $260 million package of tax cuts; and a $1 billion bonding bill with a one-time cash infusion for transportation construction projects. The first two bills passed in the final hours of session, but the bonding and transportation package blew up in the final minutes, after a handful of Senate Democrats discovered there was no funding for light rail projects in the deal. They added a provision to allow Hennepin County to raise funds for light rail and sent the bill back to the House, where Republicans adjourned instead of taking up the proposal.

Days later, Dayton vetoed the tax bill because it contained a $100 million drafting error related to the taxation of bingo halls. That bill, along with the failed bonding and transportation package, have both been on the table as issues to be taken up at a possible special session.

But instead of getting closer to an agreement, things went backwards on Tuesday when Republicans brought language for two “controversial” proposals into the mix, Dayton said. One proposal would block local governments from passing their own wage and employee benefit laws, and the other would provide tax credits for private schools, a proposal that had prevented lawmakers from agreeing to a special session before, back in January and February.

Dayton said he would have been willing to discuss the local government preemption proposal as part of a broader deal about paid family leave laws, but those conversations should have happened during the regular session. 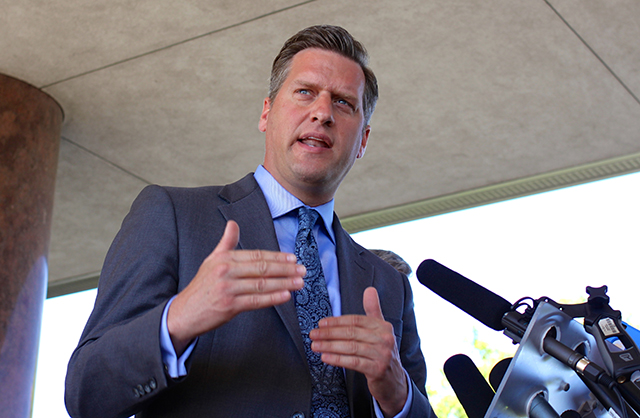 MinnPost photo by Briana Bierschbach
House Speaker Kurt Daudt: “I’m disappointed that the governor has not moved a single centimeter from where he was a few weeks ago.”

“To add more items to the agenda before we get to call a special session — and these are two very controversial items, and they know that — so what’s the motive?” Dayton said.

Republicans have been saying the same thing about Dayton. They blamed him for putting new issues on the on the table for a special session several weeks ago, including $182 million in new bonding projects, new spending proposals and some funding mechanism for light rail projects. As of Tuesday, those were all still the governor’s demands, Daudt said.

“I’m disappointed that the governor has not moved a single centimeter from where he was a few weeks ago,” Daudt said. “What we talked about upstairs is the governor getting everything he wants, not wanting to give in on anything else.”

For all the gloomy talk, no one wants to say that the prospects for a special session are dead, especially in the midst of a big election year. All 201 legislative seats are on the ballot this fall, and convening a special session (or not) could alter the perception of what did and didn’t get accomplished — and whom to credit (or blame).

Instead, both sides said they were “beginning to” think the other side doesn’t want a special session:

“I’m beginning to believe that Democrats don’t want a special session,” Daudt said. “They think they’d like to play the blame game for the election.”

The next steps are unclear. Dayton asked Daudt to call the next meeting of leaders to talk about special session, but Daudt wasn’t sure if or when it would take place.

“We don’t have an absolute deadline,” Dayton said. “So at some point you say this isn’t going anywhere.”