It was a routine briefing of a Minneapolis City Council committee on a seemingly unrelated topic, but it offered the chance to rouse a long-simmering issue in Minneapolis:

What can the city do to rid itself of the acres of surface parking lots in and around downtown?

While development activity has seen many of those lots disappear, many remain — too many, according to Council Members Lisa Goodman and Jacob Frey, who used the May 11 briefing to press city assessor Patrick Todd to do something about it.

Like what? Goodman thinks the city should use state requirements that require property be assessed on its “highest and best use” — and not on its current use — to incentivize owners to either develop the land or sell to someone who will.

So when Todd explained that the Duffy Paper Co. building in the North Loop was assessed as though it contained a luxury condo rather than a commercial business, Goodman asked: “If that’s the case, and I’m glad it is, then why wouldn’t we see high evaluations on all of these surface parking lots downtown that seem to be WAY undervalued?”

Goodman has argued that the lots remain lots because they make plenty of money for their owners with few expenses. If property taxes on surface parking lots were increased, those same owners might act differently — and the downtown would lose more of its asphalt fringe.

It is a long-running issue in Minneapolis, as it is in most cities: How can less land be devoted to parking cars and more to the types of uses that attract businesses and residents? Eran Ben-Joseph, a professor at MIT, estimates that there are 800 million parking spaces in the United States. In some places, there are 30 spaces for each car.

In 2013, amid planning for the new Vikings Stadium, the group HR&A Advisors conducted a $40,000 study of ways to reduce the number of surface lots in Minneapolis. Several council ordinances have sought to force beautification of parking lots, something that could have also increased the costs associated with operating them. And a bill introduced by state Sen. Scott Dibble, DFL-Minneapolis, would allow Minneapolis and St. Paul to impose a per-stall fee on parking, with revenue going to public plazas, transit lines, bike facilities and pedestrian improvements.

What’s more, for nearly two decades, the city has banned conversion of existing buildings to surface parking, which explains why cars can park around the foundation lines of a former Ramada Hotel at 10th Street and Hawthorne Avenue but not where the building once stood. (The hotel was notorious for being the monthly meeting place for a Twin Cities swingers club.)

But some owners of surface parking in the city question both the premise of Goodman’s tax arguments and the advisability of government intervening in the market — a market that the city plays an important role in as the owner of many downtown parking ramps. 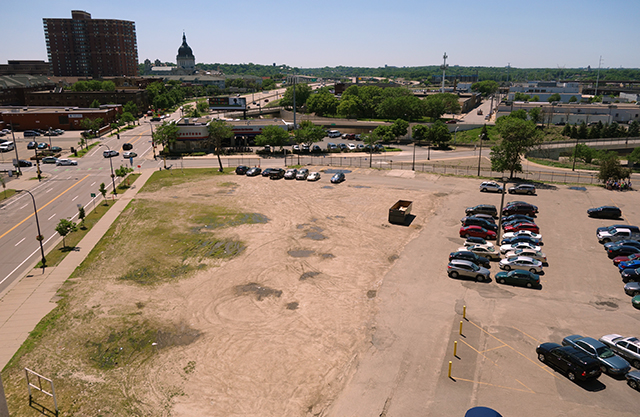 MinnPost photo by Peter Callaghan
For nearly two decades, the city has banned conversion of existing buildings to surface parking, which explains why cars can park around the foundation lines of a former Ramada Hotel at 10th Street and Hawthorne Avenue but not where the building once stood.

“The underlying premise that if they raise real estate taxes something else will happen is, at best, wrongheaded,” said Brian Short, chief executive of the family-owned Leamington Co., which has interests in trucking, community banking and, in downtown Minneapolis, parking lots. In fact, one of those lots — bounded by 10th Street and Third Avenue — was singled out by Goodman as one that should have higher property tax assessments.

“There isn’t any, I believe, surface parking lot owner in the city of Minneapolis that would rather have a surface parking lot as opposed to having the next IDS Center built on his or her piece of real estate,” Short said. “It isn’t parking lot owners that refuse to sell land that stymies development. It’s demand. If there is somebody who thought they could make money on an office building, there would be an office building under construction at this moment.” 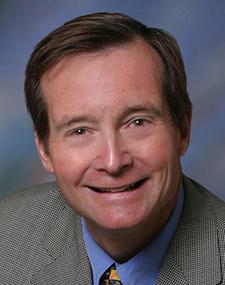 And Short, an attorney, said he thinks it would be unconstitutional for a city to use increased taxes to force a type of land use it doesn’t like out of existence. “It makes business people nervous when people like the assessor become politicized,” he said. “The assessor should call them as he sees them.”

Short said Leamington owns a vacant lot where a motor inn once stood that, because of the city ordinances, cannot be used as parking. Short said he lets a neighboring church use it for a community garden. He gets no revenue from it but still has to pay insurance and taxes, so he has no incentive to keep it in its current use. “Why isn’t there a building there?” he asked.

Short said the lots his company does use for parking produce relatively little profit. And his economics are better than most, since the lots were long ago paid off. Much of the parking owned by Leamington, in fact, was purchased by Short’s father, Robert, in the ’70s, after the city pushed a plan to surround the downtown with parking and concentrate development in downtown’s core.

Surprisingly, perhaps, given that many one-time surface lots in and around downtown have been developed, there has not been a resulting increase in demand; Leamington hasn’t been able to increase rates. Short attributes that to increased use of transit, especially since the opening of the light rail lines that meet in the heart of downtown.

According to Phillip Jaffe, principal and chief executive of Provident Real Estate, the economics of surface parking differ depending on how long the lot has been owned. If they’ve been owned for a long time and carry no debt, they can be profitable. And many owners can make extra revenue from billboard rentals.

But if an owner bought a lot recently and is still repaying loans, it might not be a money maker. That is why he thinks, generally speaking, people own surface lots with the intent to develop them eventually.

“There’s nothing revolutionary about it,” Jaffe said “It’s just supply and demand. If there’s a use that makes sense on a site and the economics makes sense, the lot’s gonna get developed. In the absence of that, it’s just gonna sit.”

Until recently, Jaffe was part of Alatus, a development company led by Bob Lux that has purchased several surface parking lots for development. Parking was an interim use. Two of those lots west of Hennepin Avenue and Hawthorne Avenue at 10th were sold recently, Jaffee said, when someone “made an offer we were willing to accept. We’ll let the next guy decide what he wants to do.”

Peter Brown, who consults for both government and real estate developers and is the author of the book, “How Real Estate Developers Think,” said people own parking lots for different reasons: some to develop, some for employees and some for the cash flow they produce.

To sell, therefore, “it has to be in the right place and someone needs to make you an offer,” Brown said. And the offer needs to be enough to replace that cash flow. “What’s the sweet spot? Everyone’s got a different one.” 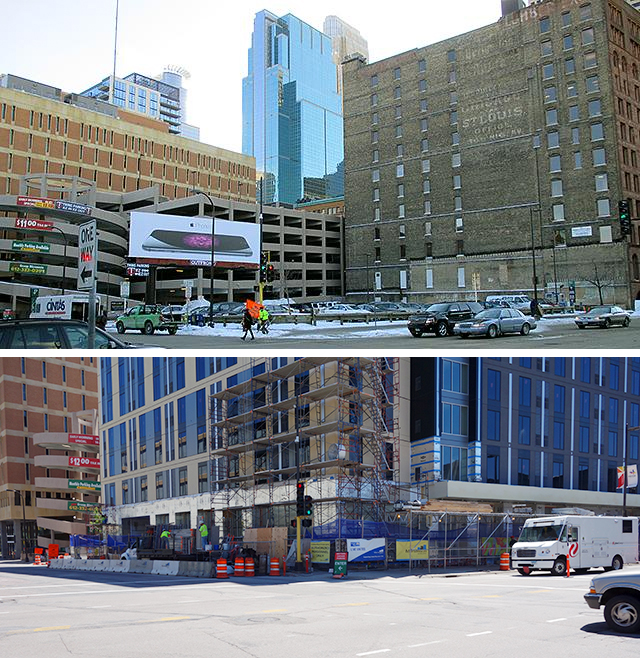 MinnPost photos by Peter Callaghan
What used to be a parking lot on Hennepin Avenue in a photo from January 2015, top, is now a construction site for an AC hotel, bottom.

Todd, the city assessor, said his office does in fact increase valuations on property that has the potential to be developed. But it also looks to see which lots are likely to be the next in line. While those might see higher evaluations, other surface lots that are less desirable to developers do not see higher evaluations and, in turn, tax bills.

“It might be four or five developments away before it is available to be built,” he said.

A sampling of Hennepin County property tax records reflects Todd’s statement — that there is a wide range of assessed values on parking lots, seemingly in relation to their location. For example, the parking lot across Nicollet Mall from the Central Library — arguably one of the most desirable sites in downtown — is assessed at $13 million. And it will only increase in value when the city completes a deal with United Properties for the lot across S. 3rd Street from the library. The value of the recently sold site of the former Ramada Inn on Hawthorne, though, where parking capacity is limited by city ordinance, is assessed at $4.6 million.

Can government change the economics?

That 2013 study of surface lots did find evidence that owners of parking lots in Downtown East sometimes have unrealistic expectations for their land’s value. And it found that owners who might have inherited property also valued the reliable cash flow that comes from parking fees and billboard leases.

The report suggested ways the city might “incentivize development” by increasing the costs of running a parking lot. One was to enforce landscaping ordinances (though Short mounted a successful legal challenge a 2014 city demand that existing lots increase plantings and setbacks). The other was to increase taxes.

“Taxes (sales and property) currently account for the largest portion of the surface parking lots’ expense burden,” the study said. But because operating costs are relatively low in many lots, the tax hikes would have to be significant and, even then, could be passed on to consumers.

At the time, the consultant did not think it made financial sense to convert surface parking lots to market-rate development. But Candace Damon, vice chair of the firm, told Finance & Commerce that could change as the city “amenitized” the area — consultant-speak for adding parks and open space that would make the area more attractive to workers and residents. She said that the then pending Ryan Companies proposal to build office towers and new residential buildings around a new public park, “is a start.”

In just three years time, that project — along with U.S. Bank Stadium — has changed the neighborhood. But it was a changing real estate market, more than direct intervention, that led to the city’s desired result.

And the half-dozen major projects that have been built, are under construction or are being planned have one thing in common: They are on what had been parking lots. Some have government involvement, such as the Commons Park and the proposed development of the city owned parking lot next to the Central Library.

But others are private projects, including the Wells Fargo buildings next to the Commons Park; a hotel at South Fourth Street and Hennepin; the apartments at North Second and Hennepin Avenue, the Latitude 45 apartments on Washington Avenue; the multi-use redevelopment of the Kraus-Anderson headquarters on Portland Avenue; and the Mill City Quarter senior housing project on South Second Street.

For all of the development activity, though, Peter Brown, the consultant, said there is still plenty of surface lots that will remain that way for some time. “There are still 40 blocks of surface lots in downtown,” Brown said. “We have a long ways to go before it’s built out.”

But Council Member Frey, who along with Goodman represents downtown, now agrees with Short that there are legal limits to how the city can tax surface parking lots, and said the economy — along with the city’s own projects — is changing downtown.

“I came into office with the clear goal of reducing the number of surface parking lots,” he said. “Eighty percent of the downtown lots in my ward are either built on or will be built on.”