Could Donald Trump be the first Republican to win Minnesota since Richard Nixon in 1972?

Now that he is the official, not presumptive, nominee for president, it’s a question worth asking, even if the answer seems clear: probably not.

Among Minnesota GOP delegates at the Republican National Convention, even the truest of the true Trump believers acknowledged that winning Minnesota would be a tall order.

While Hillary Clinton is not exactly popular in the North Star State — she was defeated soundly on caucus night by Bernie Sanders — Trump is particularly unpopular here, finishing behind Florida Sen. Marco Rubio and Texas Sen. Ted Cruz.

Yet, Trump’s camp has signaled that Minnesota is one of 17 states they plan to target in the general election, alongside top-tier battleground states like Ohio and Florida.

The list could just be campaign posturing, but forget winning: Do Minnesota Republicans think Trump can even compete in Minnesota this cycle?

‘I don’t think Trump has a chance’

Why would a Minnesota win be such an uphill climb for Trump? As many, Minnesotan and not, often point out, no Republican has won this state in 10 election cycles, the longest streak for any state in the nation.

The last time a Republican even sniffed victory in Minnesota was President George W. Bush, who came within four points of John Kerry in 2004. 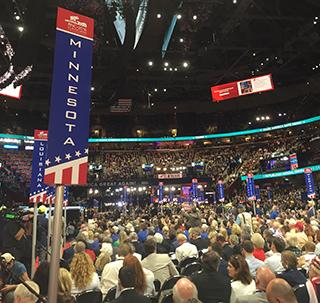 Streaks, of course, break. But in few states is Trump less popular than he is in Minnesota. It was home to one of his few third-place finishes in the primary process — only in Utah and Wyoming did he perform worse.

As Republicans handed Trump the nomination, Minnesota delegates looked at those factors, among others, and arrived at varying outlooks on Trump’s chances in Minnesota, from cautious hedging to outright pessimism.

Jennifer Carnahan, a Rubio delegate from Minneapolis, said, “I don’t think Trump has a chance to win the state of Minnesota, to be quite honest.” Carnahan is running for the Senate District 59 seat against DFL Sen. Bobby Joe Champion; she said that among the voters she’s encountered there is very, very low support for Trump.

Andy Aplikowski, a Cruz delegate from Andover, said Trump’s support in Minnesota is “pocketed” but “it’s not going to be enough to make up for Minneapolis and St. Paul.”

Even one of the delegation’s few die-hard Trump supporters, Sheri Auclair of Wayzata, did not sound especially bullish in describing Trump’s chances in Minnesota. “I’m on the fence with that,” she said, when asked if Trump could win Minnesota.

“I’m always up for a fight. Sometimes, if you fly over a state enough, the people just stop working. … If you don’t fight for it, it will always be the DFL. As an activist, I will never stop fighting,” she said.

According to Ben Golnik, a Rubio delegate and the executive director of the Minnesota House GOP, “Minnesota always offers some sort of opportunities for Republicans. We haven’t seen a real, significant amount of resources put in since 2004. What we’ve heard from the campaign is they think they have opportunities in the Rust Belt and some of the Midwestern states like Minnesota,” he said.

“To date, we’ve seen them invest basically no resources in Minnesota,” Golnik added. “It remains to be seen, but I do think there’s some opportunity there, and we’ll have to wait and see what resources they put in there.”

Minnesota GOP chair Keith Downey said it was still too early to get an accurate sense of Trump’s chances in Minnesota. He did say, “The issues and the themes that we are focusing on here at our convention are right on with the American people and, I think, with the people in Minnesota.”

“Wait a few weeks until the conventions are over, and I think you’ll see Donald Trump stacking up far better against Hillary Clinton than people might think, even in Minnesota.”

Rep. Tom Emmer invoked, as many do, the election of 1984 in assessing Republican chances.

“Remember, there’s one state Ronald Reagan didn’t win. It was Minnesota. He won every other state in 1984 except for Minnesota.” (Of course, Reagan’s opponent that year was Minnesota native son Walter Mondale.)

“Let’s see how it develops,” he said. Referring to Minnesota on a potential Trump target list, he said, “If they’re already talking about it, they think they can compete in Minnesota.”

Trump, if he is to be competitive in Minnesota, will resonate in parts of the state that few Republican candidates have before.

Many delegates pointed to the 8th Congressional District — particularly the Iron Range, a longtime DFL stronghold — as a place where Trump could do particularly well and expand the map for Republicans.

They see Trump’s message of restoring American industry and ending foreign trade deals as an appealing one in this corner of Minnesota, where NAFTA and TPP are highly unpopular and unemployment remains relatively high.

Isaac Schultz, a Rubio delegate from Morrison County, explained the Trump effect as he sees it in his area. “There is certainly a passion for Donald Trump. I’ve walked, so far, I think I’ve walked in 13 parades, and many of those in the 8th Congressional District. I walk those streets and I hear, ‘Make America great again!’”

“I don’t know if, at the end of the day, that Trump will ultimately have more votes than Hillary Clinton in Minnesota,” Schultz said. “But it will have differing effects throughout Minnesota, that Trump will have a better chance of picking up more votes than a typical Republican or a more traditional Republican in Greater Minnesota. I think the margins in terms of greater Minnesota will favor Trump in a big way.”

Trump’s appeal in a place like the Iron Range is certainly more expansive than a candidate like Mitt Romney, who was beaten thoroughly there in 2012.

At the same time, though, Trump may fall flat in places Romney did well. Trump was unpopular in the suburbs on caucus night — finishing far behind Rubio in the areas to the north and west, where Romney cleaned up in 2012.

If the Trump campaign plans to compete at any point in Minnesota, they’re taking their time.

As it is in many states, Trump’s campaign and ground game in Minnesota is virtually nonexistent. They have no campaign office in Minnesota, or even dedicated campaign staff. Downey said that the Trump camp has a “team they’ve been growing on the ground in Minnesota.”

Granted, it’s early for general election politics in a place where the State Fair is considered the opening of campaign season. Still, the Clinton campaign had dedicated Minnesota staff working months before the Minnesota caucus, and was sending out Minnesota-specific press releases since last August. On Wednesday night, as the nation focused on the RNC, the Clinton camp, with the help of Sen. Amy Klobuchar and Gov. Mark Dayton, officially opened her Minnesota general election office in St. Paul.

Downey said that “no doubt” the Democrats have a head start in Minnesota, but added that “the Trump campaign is working hard to get built for the general election,” even if he and other party leaders did not describe in concrete terms what that looks like.For now, Republicans were content to focus on the potential of a real top-of-the-ticket GOP challenge in Minnesota, even if they do not know how, or when, that may materialize.

“There’s talk that Minnesota could be one of 15 or 17 targeted states by the Trump campaign,” Downey said. “If that’s the case, there’ll be a build-out of spending and activity in Minnesota that we haven’t really seen probably since the Bush re-election campaign.”

“It’s until the next couple of weeks that we’ll know for sure what the matchup looks like, and where the money will be spent and if, in fact, Minnesota is a targeted state. I don’t think there’ll  be a gap or a question about who is more resourced.”