It was the Hennepin History Museum’s version of the Antiques Roadshow.

In collaboration with Minneapolis city clerk’s office, the museum asked residents of the county to bring in any items that might have come from the Minneapolis City Hall.

As with any building of that vintage, fixtures, decorations and furniture tend to get removed, either as tastes change or as people decide they’d look pretty good at their homes or offices. Perhaps it was a grandfather who left behind that odd antique doorknob with “MCH” cast in bronze. Maybe it’s a painting or a desk chair or a photo that has been stored away in a box in the basement?

So one day last month, the city and county asked people to bring it down to the rotunda of city hall to let the historians take a look. Under the watchful, unblinking gaze of the Father of Waters statue, they set up the few items they had received or already had and waited for people to bring in more. “We think of today as an amnesty day,” said Hennepin History Museum Executive Director Cedar Imboden Phillips. “We won’t ask how you got it.”

Not much came in that day. And only a few items have been returned since the county and city have been soliciting residents to send emails with descriptions and photos. Phillips said there have been a number of calls asking about the project, and she suspects there are some who “haven’t quite made the plunge from saying they have something to actually bringing it in.”

Any historic items turned in could end up being part of the city hall exhibit that will coincide with the 125th anniversary of the “official” laying of the building’s cornerstone, an event that will be celebrated with a ceremony at city hall at noon on Monday, July 11. (The exhibit will remain on display until the end of the year.)

For all that, though, it turns out that one the hardest questions to answer about the history of city hall should be the easiest. How old is it? That is, how can you a key milestone if there’s no agreement on a single birthdate?

Deciding on a birthday for the building is awkward. Designed as co-headquarters for the city and Hennepin County, the municipal building had to meet the needs of each respective government. As each had its own needs and politics, each handled construction of its own side.

For both the centennial and this 125th anniversary, the date of the laying of the cornerstone is considered to be 1891, used even though the building had been under halting construction since 1887 and by 1891 was already several stories high.

How about using the date of the grand opening?

Which one? The county finished its side of the building first. Sort of. At least it was the first to hold its grand celebration. In his history of the building, commissioned for its 1991 centennial, Paul Clifford Larson wrote that the grand celebration on Nov. 11, 1895 was “spectacular.” But he also added this qualifier: “That few of the spaces and components being rushed to completion actually made the September deadline was obscured by a spectacular light show sponsored by the Board of Commissioners.” 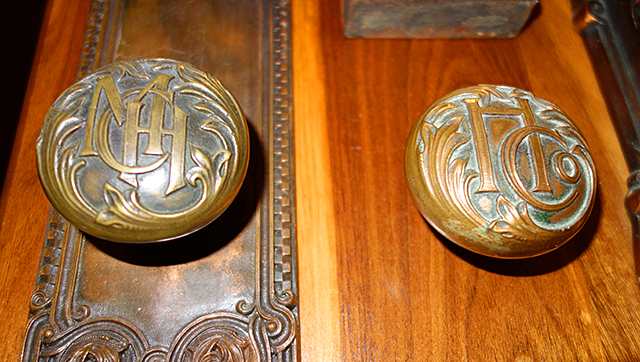 MinnPost photo by Peter Callaghan
Historic doorknobs that once adorned heavy doors in the building. Each government had parts of the building with “HCo” marking doors on the county side and “MCH” on the city side.

The city didn’t follow up with its own grand opening until Dec. 15, 1902. There was something about political infighting delaying the sale of bonds to complete construction. The local rah-rah for the second opening was tempered by the intervening years that included a deep recession. There were complaints about the cost and grandeur of the furnishings, according to Larson’s history.

And the soaring council chambers, while beautiful, had terrible acoustics. “At first glance the eye is dazzled by the brightness and colors so artistically blended, but when the echoes begin, the auditory nerves are rasped and harried to distraction,” wrote the Minneapolis Journal. In 1923, the mezzanine level was added and the chamber’s ceiling was substantially lowered.

Many of the public spaces, especially the 4th Street entry and grand five-story rotunda, weren’t finished until later. The entry, for example, was opened with the dedication of the “Mississippi” sculpture on August 11,1906. (The statue, now known as “Father of Waters,” was first created for New Orleans but was snatched by wealthy Minneapolitans and given to the city, a history that explains why the mythical figure is sitting on an alligator).

The Hennepin History Museum-curated display will not only be in the rotunda but throughout city hall — a way to get visitors to explore more of the building. Items will come from the museum’s collection, city archives and those of the Metropolitan Building Commission — an independent body with representatives from both governments that operates the building. A smartphone tour can be activated at each display.

Christian Rummelhoff is the assistant city clerk leading the city’s effort to collect and compile items and use them to help tell the story of the building. Some have been stored in the building over the years. A tin cup from the jail includes scratched graffiti from former inmates:

City staff has also found an old control buttons for the elevator that climbs to the top of the clock tower, 11 floors. Various signs that directed visitors have been pulled from storage as well as photos and displays — some created for past anniversaries. A massive brass light fixture doesn’t look right lying on its side.

And yes, depending on which side of the building they were in, recovered doorknobs were either marked with an ornate “HCo” for Hennepin County or “MCH” for Minneapolis City Hall.

Rummelhoff said his favorite item turned in by a resident is the final report of the commission charged with constructing the building, dated 1909. The man who brought it in had a question about two paintings featured in the report, and Rummelhoff was able to take him into the current city council chambers where they were re-created during the most-recent renovation. The originals have not been located. 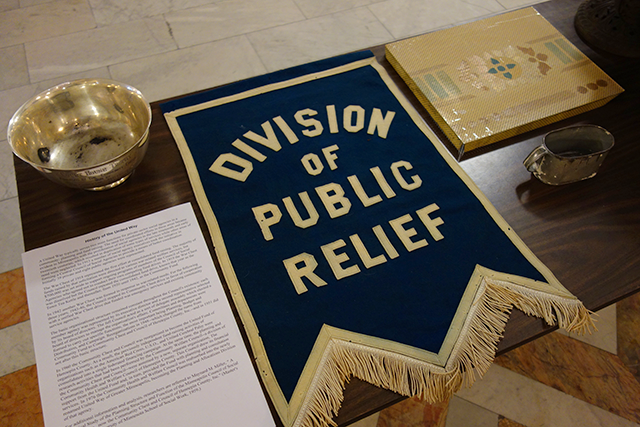 MinnPost photo by Peter Callaghan
The bowl was a trophy for a charity giving competition between city and county employees. The banner represented the government’s public relief program.

Phillips said her favorite found items are related to charitable giving. One is a banner, perhaps used in a parade, for the “Division of Public Relief.” The other is a silver bowl that was awarded during the 1950s to the winner in a city/county competition for raising the most money for charity. “Minneapolis and Hennepin County are national leaders in philanthropy,” she said. “That bowl represents the that tradition of giving back to community.”

What item would she like most to have returned for display? Phillips said she loves the story of how the city rented out parts of the building in the early years, before it had enough staff to fill it. Such tenants weren’t restricted to office uses and included a blacksmith, a horse stable and a chicken hatchery. (There was even, briefly, a gallows on the 5th Floor used once in 1898 to execute John Moshik, the last man put to death by Hennepin County).

But it’s the egg operation that most intrigues Phillips. “I would love to see a photo of chickens in city hall,” she said.

“It has been fun researching the building,” Phillips said. “You get a sense of the history of the county through that building. She said early photos show it surrounded by single-family houses.

“They were thinking big,” Phillips said of the government officials, architects and builders. “It wasn’t right in the center of the business district, not in the historic center of town. Instead it was sort of on the edges and they picked it because they thought the city would grow toward them.” 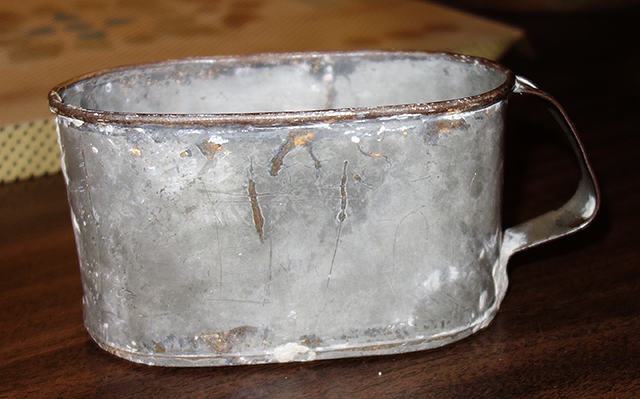 MinnPost photo by Peter Callaghan
A metal cup once used by inmates in the jail in the combined city hall/county courthouse.

It did. But not quite to the degree expected. In the charge to architects preparing designs, the governments wanted a building that would accommodate the county for 50 years and be capable of housing city staffers “suitable in size and convenience for a city of from 500,000 to 750,000.” Minneapolis did reach 521,718 in the 1960 Census but fell to 368,284 thirty years later, before recovering to 412,517.

The winner of the competition was the architectural partnership of Frederick Kees and Franklin Bidwell Long who submitted a design in the Richardsonian Romanesque style (the building looks a lot like H.H. Richardson’s Allegheny County Courthouse in Pittsburgh).

“A thundering granite pile that when it rose block upon mighty block in the 1890s must have seemed like the city’s dream of itself — powerful, resourceful, built for the ages,” wrote architectural historian Larry Millett in his AIA Guide to Downtown Minneapolis. Millett will speak at next week’s ceremony.

Phillips said she is excited about one feature that will attempt to humanize a story at risk of becoming a tale only of powerful people — all white, mostly men. The museum staff is planning to use female mannequins wearing period clothing among displays of office furnishings and equipment that would have been used by the clerks and secretaries.

“One issue with a building as big and monumental and grand as this is it is hard to put ‘you’ in the story,” she said. 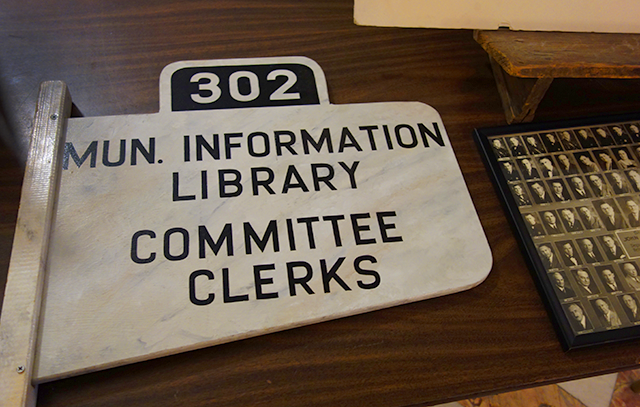 MinnPost photo by Peter Callaghan
A sign that had directed visitors to the Municipal Building in Minneapolis, part of the collection gathered by the city clerk.

As city prepares to mark anniversary, one question remains: just how old is Minneapolis City Hall?