Steve Cwodzinski spent more than 30 years teaching civics and American government, but when he retired from Eden Prairie High School earlier this year, he thought it was time to practice what he was preaching.

So Cwodzinski filed to run for a state Senate seat.

“For all those years, I’m preaching civic virtue and political efficacy,” he said. “I wanted to walk the walk.”

On paper, Cwodzinski, who is running as a Democrat, should be a competitive candidate. Senate District 48 covers most of the southwest suburb of Eden Prairie and part of Minnetonka. President Barack Obama and Mitt Romney were in a dead heat there back in 2012, the same year voters soundly rejected a conservative-backed amendment attempting to ban gay marriage in the state. In the House, the district is represented by both a Republican and a Democrat.

But Cwodzinski, 57, is taking on incumbent Sen. David Hann, the chamber’s minority leader and its highest-ranking Republican. A former Eden Prairie School Board member and one-time candidate for governor, the GOP lawmaker has held his seat for nearly 15 years. “[Democrats] don’t like me,” Hann said. “They think I’m Public Enemy Number One and I would say it’s because we’ve been very effective” in the minority.

Still, Senate Democrats are bullish about their chances in Eden Prairie, a suburban district they think will reject Donald Trump and welcome construction of the controversial Southwest Light Rail Line.

Cwodzinski was born in California and was raised by his mother and his grandfather. In middle school, his mother got married and moved the family to Superior, Wisconsin, just across the border from Minnesota. “It was a labor town. I never saw a guy go to work with a briefcase,” he said. “It was always lunch pails.”

Growing up, Cwodzinski said he was “visionless.” It was a careless attitude that culminated in a car accident when he was 17 that crushed his left leg. In the hospital, where Cwodzinski spent weeks, he decided he wanted a different life.

He traveled to California to meet his biological father and moved to the Twin Cities to attend the University of Minnesota. Eventually he ended up with a teaching degree and landed a job as an American government teacher at Eden Prairie High School, where he’s stayed for his entire career. He’s popular with students and parents, who call him “Cwod.”

“People for years, parents at conferences, said why don’t you run for public office?’” Cwodzinski said. “I thought, why would I leave this place?”

The thing that pushed Cwodzinski over the edge was Hann’s support for the constitutional amendment to ban gay marriage in 2012. Only four in 10 voters in Eden Prairie supported the amendment that year, and Cwodzinski was one of the people who voted “no” to the ballot initiative. “That was the tipping point,” Cwodzinski said. “That’s when I said, ‘I think I could run against this guy and win.’”

From religious scholar to politician

Hann, 64, grew up in South Minneapolis and went to high school in Bloomington. When it was time to go off to college, he picked Gustavus Adolphus College in St. Peter, where he planned to study religion. But his time there was cut short by the Vietnam War, in which Hann served as Army chaplain’s assistant. After the war, he was able to finish his bachelor’s degree and started working toward a Ph.D. at the University of Chicago Divinity School.

Hann wasn’t trying to become a pastor — he was more interested in the study of religion and religious scholars. Yet before he could finish his doctorate, he married and moved back to Minnesota, where he ended up going into business consulting, providing analysis and advice to help organizations improve productivity. 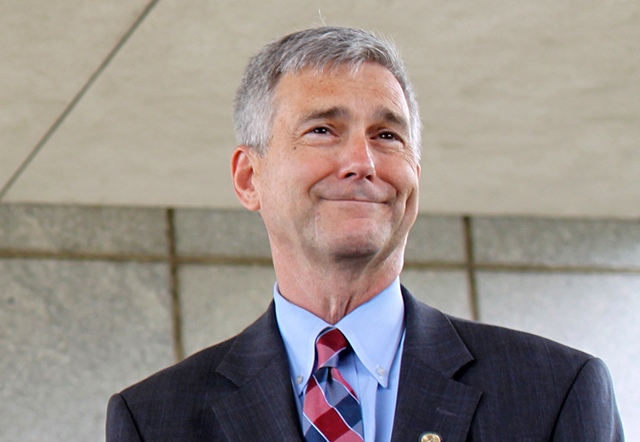 In 2002, he won a  three-way race for a state Senate seat in Eden Prairie against a Democrat and a popular Eden Prairie City Council member who ran as an Independent. At the Capitol, Hann stood out as a social conservative — supporting state laws defining marriage as between one man and one woman — who specialized in education and health care policy. He also became interested in the legislative process, serving on the Rules and Administration Committee. By 2007, he had climbed the ranks to become assistant minority leader, but stepped down from the role to make a run for governor in 2010.

Hann eventually exited that race after polling showed him falling behind other candidates. But in 2012, after they lost a two-year hold on the majority, Republicans in the Senate elected him to lead their caucus.

Situated 12 miles southwest of downtown Minneapolis, Eden Prairie attracts many people who work in the city but want to live in the suburbs to raise a family. The district is 81 percent white with a median age of 40, according to 2014 census data, and the median income is $95,075.

With one of the top public school systems in the state, education has always been one of the biggest issues for voters in the district. But Cwodzinski said he’s also hearing a lot about the Southwest Light Rail Line, a controversial transit project that failed to secure needed state funding in the final moments of the 2016 legislative session. (Funding for the project is being discussed as part of a possible special session of the Legislature.)

The line would stretch from downtown Minneapolis through the communities of St. Louis Park, Hopkins, Minnetonka, and Eden Prairie, passing in close proximity to Edina.

Cwodzinski says people in the district want the line built, and so does he. The project is supported by Eden Prairie Mayor Nancy Tyra-Lukens and the local business community, including the TwinWest Chamber of Commerce. But Hann, a staunch opponent of the line, said people in the district offer a different view of Southwest LRT when he starts talking about the details, particularly its more than $1 billion price tag its administration by the Metropolitan Council, a regional planning agency populated by unelected members.

A bigger factor in the Senate race, Democrats say, could be the presidential contest between Republican Donald Trump and Democrat Hillary Clinton. Cwodzinski said he’s hearing nothing but “disdain” for Trump in the district. Minnesota was the only state to hand Republican candidate Marco Rubio a victory during the Republican primary campaign, mostly through votes in the suburbs.

In Hann’s Senate district, Trump earned only 369 of more than 2,000 votes cast, with Rubio pulling in 1,087 votes. Hillary Clinton earned 1,421 votes in Eden Prairie, polling only slightly behind opponent Bernie Sanders. What’s more, turnout is much higher in presidential years, usually benefiting Democrats. Hann said he’s not sensing an upswell of support for Clinton in the district, though, and that the Trump wild card factor could tap into general dissatisfaction with political elite.

Hann has one specific disadvantage in the race: As head of his caucus, he’s charged with overseeing the Senate Republican’s election efforts in competitive districts across the state. Thanks to that added responsibility, it’s not unprecedented for top legislative leaders to lose their own seats. In 2006, for example, Former DFL Senate Majority Leader Dean Johnson lost his seat to a political newcomer Joe Gimse, partially for his stance on social issues, but also because he wasn’t paying as close attention to his own district. Johnson left the Senate just as the six new Democrats he helped elect were sworn in.

Hann said he’s not taking his own seat for granted. In 2012, he beat DFL candidate Laurie McKendry by nearly 3 percentage points. It was a strong year for Democrats, and outside groups spent more than $400,000 to defeat him. Hann said he didn’t have any help from outside groups to defend his seat.

“I’ve always had competitive opponents. You look at it on paper and you say it’s kind of divided,” Hann said. “They outspent me by a ton, but that’s not going to happen this year. I guarantee it.”

Could trains and Trump decide one of Minnesota’s most watched state Senate contests?