The Downtown East Commons park in downtown Minneapolis gets an official opening Thursday, which will include — of course — a ceremonial tossing of the first Frisbee.

There will be speeches that will praise the park, as well as its designers and builders. Then the grassy fields and hardscaped areas will host its first event: an outdoor celebration, complete with food trucks, an Asian dance team and free yoga classes. (The event will go from 11:30 a.m. to 1 p.m. with the opening programming beginning at noon.)

But what this 4.2-acre park — wedged among a giant new stadium, a new apartment building, two new office buildings and the historic Armory — might want more than anything is to be loved, to be understood. From its inception nearly three years ago, after all, the park has been the subject of debate and derision. Who would run it? Who would pay for it? Was it public or private or somewhere in between — the worst of both worlds?

The Minneapolis Park and Recreation Board didn’t want it, arguing that it wasn’t really a public park because on days when there were Vikings games or other stadium events, it would be programmed by the team or stadium authority. And the City of Minneapolis couldn’t own it, according to a judge’s ruling, because parks are the domain of the park board.

In the end (or at least for now), the Commons will be owned by the park board and leased to the city which will, in turn, allow a non-profit entity to operate it. In the meantime, the Downtown Improvement District will run it until a permanent management structure, and permanent funding, can be figured out.

Will the opening — with the reality of the space, with the green grass and the trees — change the public perception of what is both grandly and humbly called “the Commons?”

Jacob Frey hopes so. The Ward 3 council member has been the council’s point person for the project as well as its main cheerleader. “This has gotten so much bad press because it has been messy and confusing as the process has been carried out,” Frey said on the eve of the park’s official opening. “Great cities have a spectacular downtown, and every spectacular downtown has a core, essential park.”

Minneapolis has lacked that, at least until now, Frey argues. “Once people get out there and experience the space, a lot of the messiness of the process will wash away.”

For Frey, much of the bad feelings — suspicions even — surrounding the park are based either on misconceptions or factors that have changed since an agreement between the city, the Vikings, the Minnesota Sports Facility Authority (MSFA) and the developer, Ryan Cos., was signed in February 2014.

That agreement gave the Vikings use of the entire park on game days and envisioned that the team would need to have access the day before and day after to erect and remove temporary structures like tents, pavilions and stages. The stadium authority would also have the right to use the eastern half of the park — the portion between Park and Portland avenues — for 40 days each year for other stadium events. In both cases, no rental fees would be due to the operator of the park, but any expenses for security and cleanup would be paid by the team or MSFA.

In all cases, however, the rights to the park were not exclusive. In other words, the park would still be open to anyone — not just invitees or ticket holders. While areas where alcohol is being served would be restricted by age, and some pavilions could be set aside for VIPs, the park itself would remain open.

Still, the deal was panned as giving publicly owned park space to private parties — the Vikings and other stadium users. 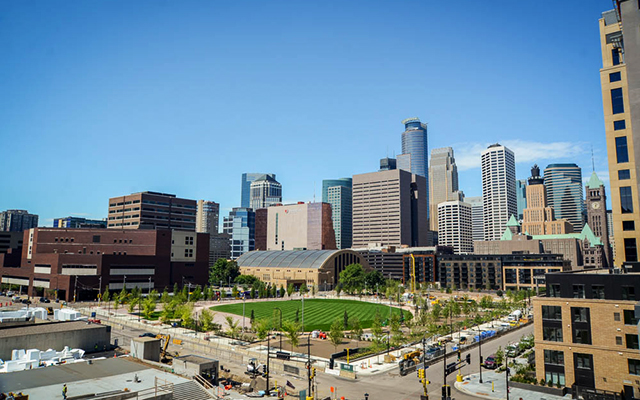 City of Minneapolis
In the end (or at least for now), the Commons will be owned by the park board and leased to the city.

Since the deal was signed, though, there have been several changes to many of the initial assumptions and expectations for the park. First, the Vikings ownership lost out on its bid for a Major League Soccer franchise to a competing group; many of the days reserved by the stadium authority were held in anticipation of the soccer team playing in the new facility. In addition, the Vikings will rent the parking area of the Hennepin County medical examiner’s office across South 5th Street to use as a place for tents, stages and pavilions — rather than the park itself.

The Vikings have also said — though there is no formal agreement yet — that they will not use the western half of the park at all. And the team has said it will offer family oriented activities on the eastern portion of the Commons. “The largest misconception is the issue of public accessibility,” Frey said. “They have a right to use but not exclude.”

Frey said that the types of activities planned by both the team and the stadium authority are exactly what park planners were hoping to have. They call it “activating” the park.

While the Vikings have communicated the change in plans for the Commons, the team and the MSFA have so far declined to formally renegotiate their agreement with the city. It is possible then that the team could later assert a legal right to use both halves of the park, as envisioned in the original February 2014 agreement.

Yet in an email to Frey, Vikings executive vice president Lester Bagley appears to commit the team to less-frequent and less-intensive use of the park. “We agree with you that is in the Vikings and the public’s best interest to ensure that this space is usable and accessible for the general public at all times, including during Vikings games,” Bagley wrote.

Among the changes the Vikings are committed to, Bagley told Frey the team will:

If Frey is the main cheerleader, former council member Paul Ostrow might be the lead critic. He was one of the plaintiffs in a 2013 legal challenge to the city’s authority to operate a park. He has also been critical of the park board for agreeing to the sale and lease-back deal that is an attempt to work around the court ruling.

Ostrow continues to maintain that none of the agreements are legal. The park board’s agreement to own the land and lease it back to the city does not satisfy the court ruling, he said. The city, he said, clearly operates the park, something not allowed in its charter.

Ostrow also asserts that the use agreement between the city, the team and the stadium authority was not properly authorized by the city council and was not ratified by the council. And regardless of whatever letters Frey may have from the team, that doesn’t change the use agreement and is not binding on the Vikings. “My position remains that there are no valid agreements,” Ostrow said.

And he isn’t impressed by claims that the number of days that the Vikings or MSFA have use of the park are less than first announced. “Regardless of how many days, at the end of the day the primary beneficiary is the Vikings,” he said. “They’ll make a lot of  money off of it. The city would never have chosen to locate and build a downtown park in that location. The only reason is because of the location of the stadium. It’s only incidentally going to benefit the public.”

When the Vikings win the Super Bowl

There are some other quirks in the agreement between the city, the Vikings and the MFSA. The Vikings and the stadium authority, for example, can use the stadium’s liquor license to cover sales and consumption in the park. But under current city ordinance, other events would not be able to serve alcohol. Even a picnicking couple couldn’t bring a bottle of wine to the park.

Frey said he intends to offer amendments to city ordinance to change that. 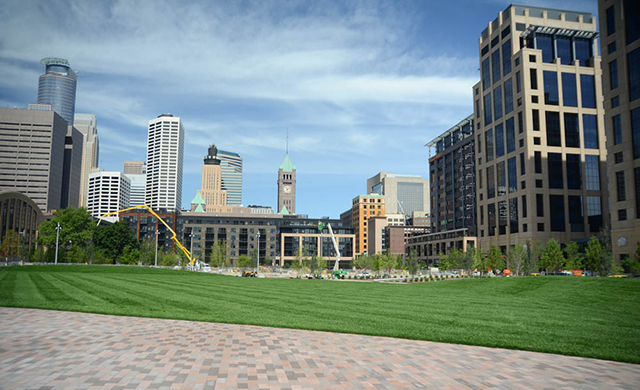 City of Minneapolis
The Vikings have also said — though there is no formal agreement yet — that they will not use the western half of the park at all.

The agreement also set out other days when the team and the authority can claim use of the park. Should the Vikings win the Super Bowl, for example, the park can be set aside for a victory celebration (the same is true for an MLS Cup victory party, but only if the team is owned by the Vikings). When the stadium hosts the 2018 Super Bowl, the park will also be reserved for event-related programs.

The scheduling for use of the eastern section of the park must be flexible to accommodate a late change of game day during the NFL season, when the league might shift a Vikings game to a Thursday, Saturday or Monday.

Offering more — and less — than what was promised

The park that opens this week will not quite be what was unveiled in earlier designs, though it will be more than was expected at this stage. A two-phase opening was first envisioned. As the stadium opened, the park was going to be primarily grass with the fully developed urban park coming later, in time for the 2018 Super Bowl.

Private fundraising hasn’t done well enough yet to include a large water feature and permanent buildings, such as a pavilion with a restaurant and restrooms. But it has done well enough to advance all other features designed by the firm Hargreaves Associates: sweeping lawns, berms and trees, hardscaped plazas and curving walkways. Some of the trees that had been on the site when it was a parking lot have been retained. The price for these improvements: $10.8 million out of the $14 million raised so far. The fundraising goal for the park itself, plus some short-term operating costs, is $22 million. How to pay annual operating costs of around $3 million — envisioned to come from both public and private sources — hasn’t been determined.

Essential, illegal, misbegotten or misunderstood? Ready or not, downtown Minneapolis’ ‘Commons’ is set to open